For a town of about 1000 souls, the Cornish fishing village of Port Isaac “really punches above its weight”, says local resident John Cleave. “We’ve got the number-one restaurant in the UK, Restaurant Nathan Outlaw. They film the TV series Doc Martin around here. And there’s our little film.”

That film is Fisherman’s Friends, a gentle comedy about a music label manager called Danny (Daniel Mays) who stumbles upon a 10-strong group of fishermen (and friends) who sing sea shanties, and becomes convinced he can turn them into pop stars. 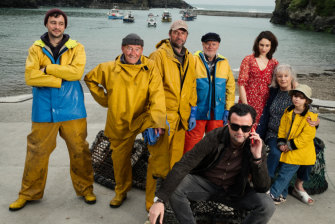 Daniel Mays (front) stars as Danny, the music label manager who “discovers” a group of Cornwall sea-shanty singers and turns them into pop stars in the based-on-fact comedy Fisherman’s Friends.Credit:Roadshow

Remarkably, it all happened. Well, more or less.

“There are inventions in there,” says Cleave, an author, shopkeeper and spokesman for the real-life Fisherman’s Friends, with whom he has been singing for 25 years or so. “None of us are portrayed as individuals in the movie – which was a bit of a relief, actually – but they captured the spirit of the group and the spirit of this part of the country.”

In a word, that spirit is independent.

When Danny first approaches Jim (James Purefoy) and the others with the suggestion of recording them, they’re sceptical. Not so much because they don’t think they’re any good – they’ve been doing it for years, in the pub, on the beach, on the boats – but because he’s from London. Jim’s daughter Alwyn (the marvellously named Tuppence Middleton) is only saying what everyone else thinks when she dismisses Danny as a “tosser”.

Danny is an amalgam of two real-life figures in the story, the independent music producer Rupert Christie, who first discovered them, and Ian Brown, the music manager who took them on and scored them a contract with Island Records – and who still manages them.

What about Danny’s chilly reception – was that as it was?

“Oh yeah,” says Brown. “I turned up there as an idiot from London in a Mercedes that struggled to get down the main street. They thought I was an arsehole, I should think.”

Brown was instantly smitten, though. A former pig farmer who only entered the music business in his late 30s, he had grown up listening to folk music in the clubs his aunts used to run in Oxfordshire. The shanty singers seemed instantly familiar to him, even though they were a long way from his usual act.

At the time, he was managing Jason Donovan; in fact, he says, “I’d been in Hyde Park with Jason, we’d just met Kylie before doing a gig” when a DJ he managed, Johnny Walker, called him with a tip about these crusty singers down in the west country.

“I ignored it for a few days but eventually I went down and fell in love with them. They sang in the pub, just like they do in the film, and it was just real.”

That was 2010. By April, they had recorded an album; by the following year it had gone gold, peaking at number 9 in the UK charts.

The key to their appeal, he adds, is “they’re honest, they’re great, and I think they’d be even bigger [if unearthed] today because the world’s gone to shit, and we could all do with a bit of honesty and straightforwardness”.

That’s as may be (as they say down Cornwall way), but not everything about the Fisherman’s Friends story is quite so salt-of-the-earth. There’s a scene in the movie in which the papers announce the band has been signed by Universal (owner of Island Records) to a £1 million deal. Thing is, while the deal is real the figure is pure fiction.

So, how did that play out in real life?

The story did make all the papers, though – that bit is true at least. “It was a slow news day, nothing going on,” Cleave recalls. “I think it was The Sun that said ‘Fishermen net million pound recording deal’.”

So nobody has been able to retire on it then?

“No,” Cleave says. “I think a lot of music lovers wish we would retire, but no.”

They do still play, a dozen or so gigs in two stints a year, when the lull in the fishing allows. Typically, they pull a couple of thousand people to a show, but they have also played on the main stage at Glastonbury, third on the bill behind Paul Simon and Beyonce.

For all that, Mays knew nothing of their story when he was offered the role.

“To be honest, when they sent me the script I thought it was about the throat lozenges,” he says.

It appealed to him because it was a romantic comedy – at least in part – a genre the Essex-born 41-year-old hadn’t done before. 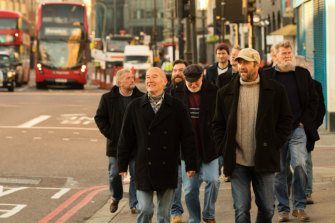 Fish(ermen) out of water: the buoy band goes to London.Credit:Roadshow

He also liked Danny’s storyline in the film, journeying from career-minded wide boy to a man willing to forego his selfish instincts for something bigger.

“He falls for the whole community, that way of life, and he’s forced to re-evaluate his place in the world,” says Mays. “It’s a great arc he goes on.” Maybe even a great ark.

He wasn’t immune to the lure of that sort of life himself, finding the town of Port Isaac as endearing in real life as it appears on screen.

“They welcomed us with open arms,” Mays says. “There’s literally one pub, The Golden Lion, where we’d all congregate after filming and we’d always break into song, and by the end of filming I’d learnt all the words to the shanties. And that levity and sense of camaraderie bled into the film.”

It’s worked its charm on audiences too, especially in the UK, where the movie has taken about $14 million at the box office and spurred talk of a sequel.

“They haven’t returned them yet,” he admits. “But stranger things have happened, so don’t bet against it.”

Fisherman’s Friends is in cinemas from November 21.