Tasmanian environmentalists have lost a case that sought to end native forest logging in the state, but may launch an appeal. 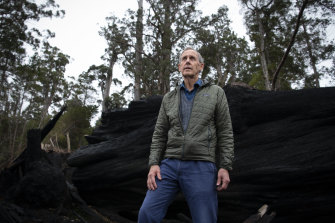 Bob Brown inspects burnt trees that were once home to swift parrots.

The foundation said a win would have helped protect the habitat of the critically endangered swift parrot. It argued Tasmania’s regional forest agreements were “fundamentally flawed” and failed to meet the standards of national environmental laws.

Regional forest agreements are legal arrangements between states and the Commonwealth under the federal Environment Protection and Biodiversity Conservation Act, which is currently under review.

They allow for the logging of native timber on public land if certain conditions are met, like protecting endangered species and biodiversity, but have been heavily criticised as ineffective by environmentalists.

In the case’s December hearing, barrister Ron Merkel, QC, on behalf of the foundation, argued the regional forest agreements were not enforceable as they damaged the purpose of legislation that aimed to protect the environment, native species and prevent extinction. 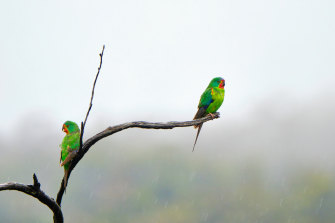 On Wednesday the Federal Court ruled against this argument, dismissing the application and finding the Tasmanian agreement did constitute a regional forest agreement under the act.

Last year, Victorian environmentalists had a significant win when the Federal Court ruled state-owned logging agency VicForests had breached environmental laws by logging areas in the Central Highlands that were the habitat of the critically endangered Leadbeater’s possum.

This prompted the Bob Brown Foundation to see if a similar legal challenge could be made in Tasmania. But its case differed from the Victorian example because it claimed that the Tasmanian regional forest agreement did not fit the definition of one under the act.

A statutory review of national environment laws, released last week, called for the removal of exemptions for the logging industry that are created under regional forestry agreements.

Former competition watchdog head Graeme Samuel’s final report from his once-in-a-decade review of the Environment Protection and Biodiversity Conservation Act said there were “fundamental shortcomings” in the interactions between regional forest agreements and the act.

On social media, the Bob Brown Foundation said the court decision would not stop its campaign to end native logging.

The Age has approached Sustainable Timber Tasmania for comment.