MISS FISHER AND THE CRYPT OF TEARS ★★★

In her big-screen debut, television sleuth Phryne Fisher (Essie Davis) races through the streets of Jerusalem in an indigo burqa with a spangled veil that signals her progress by catching the sun at every turn. It's the closest she ever gets to going undercover. She’s never gone in for disguise. Detective work is merely her hobby. Being Phryne is her vocation, being the centre of attention is her modus operandi and her numberless costume changes are all part of her armoury. 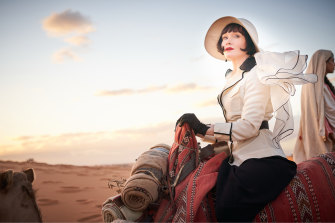 Phyrne Fisher (Essie Davis) doesn’t quite go undercover in Morrocco in Miss Fisher and the Crypt of Tears.

This means that her star power has always thrown the rest of the series’ cast into shadow. This includes Nathan Page as her love interest, the country policeman Detective Jack Robinson. The supposedly simmering state of their attraction to one another has been a question of theory rather than reality.

Yet he, too, has made the leap to the big screen in Miss Fisher and the Crypt of Tears, which takes them into the desert in 1929 on an Indiana Jones-type quest involving camels, scarabs, an emerald the size of an emu’s egg and corrupt British officials manipulating the politics of the region for their own nefarious purposes.

It’s an especially ambitious agenda, given the fact the film was partly financed by crowdfunding. Much of it was shot in Morocco, a favoured location for movie companies telling any story set in the Middle East, and its producers were lucky enough to be able to take advantage of a Jerusalem set that Ridley Scott left behind after shooting there in 2005.

The result is a tribute to the Australian film industry’s flair for making do but, sadly, that’s not enough to overcome a fundamental failure in tone.

Just when you’ve decided that the director, Tony Tilse, and screenwriter Deb Cox are going to embrace the film’s essential ridiculousness and turn on a bit of sharp-witted self-parody, they straighten their faces and revert to creaky melodrama.

It’s an odd effect. You feel as if you’re being treated to a series of jokes by someone who’s forgotten all the punchlines. The gags are there but they never realise their potential. And the can-do spirit does wax and wane. At one point, the plot takes us to Melbourne, standing in for London and the Home Counties. Local mansion Rippon Lea becomes a peer’s stately home and the setting for a debutantes’ ball, which never quite rises to the occasion, stalling at a point around the church social level.

This time, Cox didn’t adapt the script from one of the novels by Phryne’s creator Kerry Greenwood. It’s an original and if there is to be a sequel, as the producers clearly hope there will be, could somebody please polish up the pratfalls and punch up the dialogue. Quibi: 'Punk'd,' 'Singled Out,' and All the Unscripted Content on Deck for April
WORLD NEWS