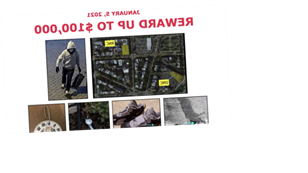 Federal officials in Washington are now offering a reward of up to $100,000 for information that leads to an arrest of the suspect or suspects who placed pipe bombs near the Democratic National Committee and Republican National Committee headquarters ahead of the January 6 assault on the U.S. Capitol. The reward has previously been set at $75,000.

The FBI and the ATF Washington also released a new wanted poster via social media on Friday. The poster says the devices were planted on January 5, the day before the deadly riot.

It shows previously-released images of the suspect wearing a face mask, a gray hoodie, and Nike Air Max Speed Turf shoes in black, gray, and yellow. The wanted poster also includes what appeared to be images of one of the pipe bombs, which the FBI has said were “viable” explosive devices. The devices did not explode and were rendered safe by explosives technicians.

In a press call Tuesday, FBI Washington Assistant Director in Charge Steven D’Antuono said the pipe bomb investigation was “top priority” for the bureau. He said the FBI wants to identify a suspect or suspects “for the safety of the American people.”

The #FBI and @ATFWashington are offering up to $100,000 for information about the individual(s) who placed pipe bombs at the Democratic National Committee and Republican National Committee headquarters in Washington, D.C., on January 5. https://t.co/f5uzC59PAC pic.twitter.com/NJxepq8PEV

Cassidy McDonald contributed to this report.