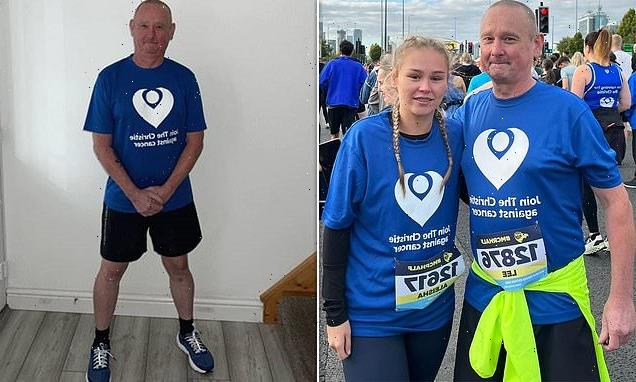 Father-of-three, 56, is horrified after pain he put down to a pulled muscle was an inoperable cancerous tumour – now he is running a marathon to help find a cure

A man who thought he had pulled a muscle playing golf was horrified to discover he actually had an 8.5cm-long tumour, and was diagnosed with an incurable cancer.

Now Lee Young, 56, is today running a marathon to raise money for a cancer treatment charity, revealing that he feels ‘fit and healthy’ despite the dire circumstances.

His tumour, which he discovered as a lump while applying heat cream, was eventually found to be a secondary cancer; with the root cause of it not known to doctors, called cancer of the unknown primary (CUP).

Lee says he felt like the ‘world collapsed around’ him when he was first told of the tumour, which professionals were unable to operate around due to its proximity to the kidneys. 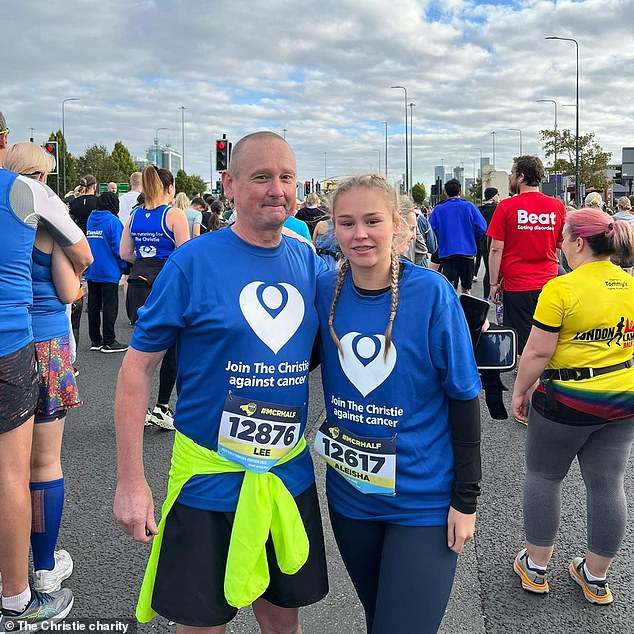 Lee Young (pictured with his daughter Aleisha), 56, is today running a marathon to raise money for a cancer treatment charity, revealing that he feels ‘fit and healthy’ despite the dire circumstances

He told the outlet: ‘Being told you have cancer is one thing, but being told they can’t do anything is another thing entirely. I couldn’t get my head around it, if you’re going to get a cancer, this isn’t a great one to get.’

The garage owner was sent to a treatment centre in January, The Christie Hospital,  to get ‘comfortable’.

That’s when his outlook changed.

He told MEN: ‘I was scared to death and quite nervous, but the nurses at The Christie made me feel so welcome.

‘In March, a clinical trial became available and it’s quite rare to be able to get on a clinical trial, but I thought if it doesn’t help me, it’ll help someone in the future.’ 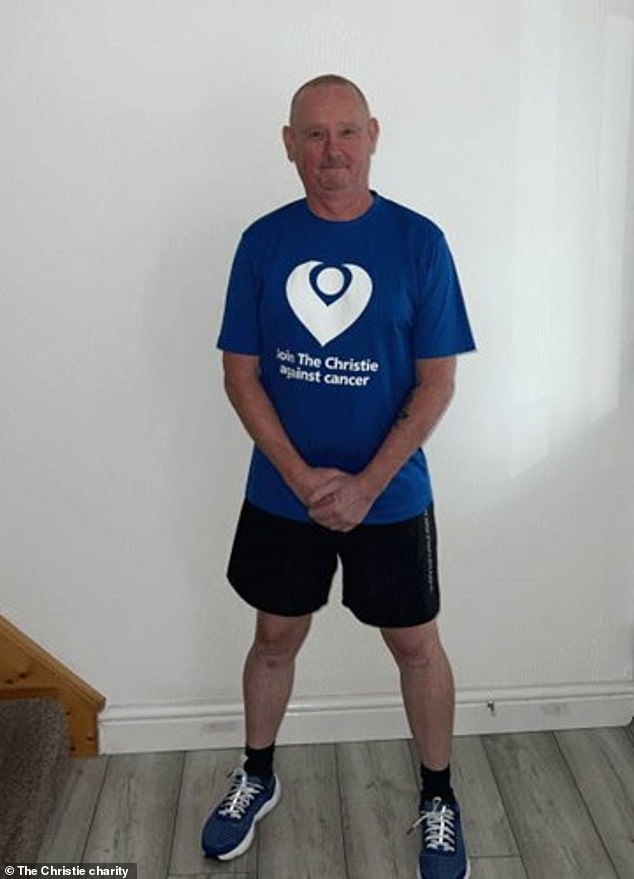 Lee praised the trials as being behind ‘where we are today.’

‘Now I feel like there’s no point in being sad over something you can’t control,’ he added.

Lee’s tumour has now shrunk by more than a half following three rounds of chemotherapy and a first round of immunotherapy.

Lee has expressed his awe at the ‘instant’ results – and admitted to feeling ‘fine’ and wanting to ‘make the most out of life’ in this moment, knowing things can change quickly.

Today, the father-of-three is aiming to raise £3,000 for the cause by running in the  Manchester Half Marathon, deciding to join his daughter Aleisha, who initially entered to support The Christie Hospital.

His JustGiving page says: ‘I’m raising money for the Christie where I’m having treatment for a unusual cancer.

‘Because of this I am on clinical trials. The Christie is absolutely brilliant but all these trial drugs cost and also the care is unbelievable.

‘So I’ve decided to do the Manchester half marathon in October 2022 to raise as much has I can to help in the fight against this horrible disease.

‘Cancer doesn’t care who it targets but everybody is affected (sic) by the disease, family and friends.

‘The more trials we do hopefully we can in the future beat this. Please donate whatever you can, it all adds up.’

You can donate to Lee’s JustGiving page here.