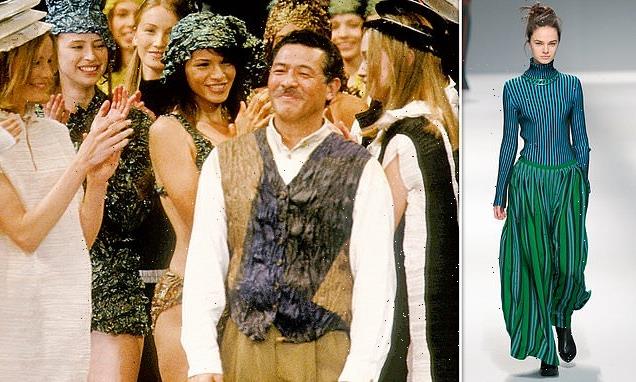 Farewell Issey, the kindest man in fashion – With devotees ranging from Grace Jones to Prue Leith, the pioneering designer Issey Miyake, who died this month, has left an incredible legacy

A few years ago I had a phone call from a young journalist who explained that her magazine was planning a fashion feature on women with large collections of vintage clothes. ‘And my editor says she believes you have an enormous collection of Issey Miyake?’ Er, yes I do, I replied. I have been buying it for more than 30 years but every piece was new when I bought it – to me it wasn’t a collection of museum archive pieces but a working wardrobe. I didn’t go as far as the late architect Zaha Hadid, who only ever wore Miyake, but the Japanese designer was a style staple for me. I have written about fashion for a great chunk of my career and I love many labels, many designers. But, confession time, I do have two running rails of Miyake’s clothes in my spare bedroom Because, as he insisted, they are clothes, not fashion, and he intended them to last. They are, however, a very hot ticket on Ebay among clued-up vintage collectors.

At the beginning of this month, Issey Miyake died of liver cancer aged 84, having built up a global multi-brand fashion and perfume empire over 50 years. He is mourned by a swathe of women and men across the creative arts and industries, across the media, theatre and academia. 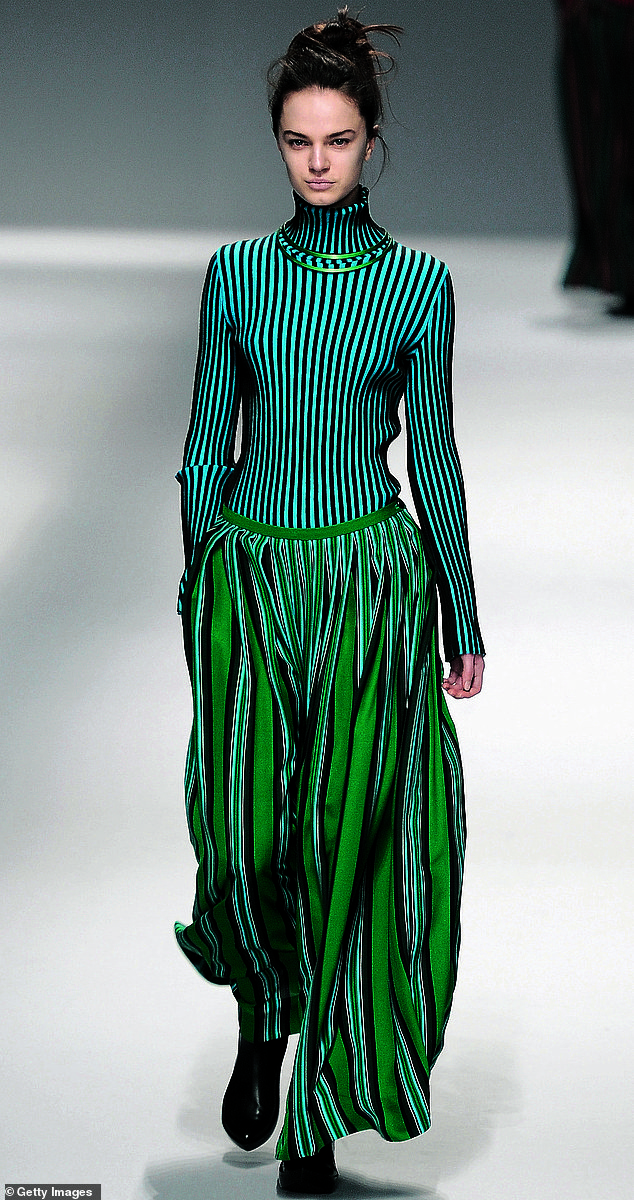 At the beginning of this month, Issey Miyake died of liver cancer aged 84. He had built up a global multi-brand fashion and perfume empire over 50 years

Numbered among them and as various in personal style as could be imagined are Jancis Robinson, Grace Jones (some of the most iconic photographs of her are in Miyake), the Olsen twins, Katy Perry, Prue Leith, Tinie Tempah, Kim Kardashian, Will.i.am, Suzy Menkes and the potter Jennifer Lee. He loved his customers, co-opting them into the process of creation, making them into lifelong friends. ‘When I make something,’ he said, ‘it’s only half finished. When people use it – for years and years – then it is finished.’ The story of how he made Steve Jobs of Apple 100 turtleneck tops to team with his Levi’s 501s so that he was not troubled by ‘decision fatigue’ in the mornings is well known. Less well known is the occasion when he learned that architect Richard Rogers refused to stop wearing the Miyake Windcoat he had owned for more than a decade and which had become, courtesy of much travel and many building sites, a tad scruffy. Miyake promptly made him an identical replacement and promised more whenever needed.

His innate and impulsive generosity is also there in a story told by his long-time UK press officer Piera Berardi. ‘He was in London during fashion week in 1995 and I asked for an extended lunchtime to see my brother Antonio Berardi’s first catwalk show. Issey had a business lunch but he immediately cancelled it and said, “I’m coming too.” And there he was in the front row of Antonio’s show. Imagine what the world’s press made of that! Imagine what that did for Antonio’s fledgling reputation.’

Future-shaping talent always excited Miyake. In 1986, when print was at its most powerful and profitable, the entire Guardian features department plus assorted critics and specialists moved to Tokyo for a week. He laid on a dinner party in Tokyo’s newest, most expensive restaurant for me, my fashion editor Sarah Mower and (a late self-selected add on) Miyake-ophile and art critic Waldemar Januszczak. He did it not to promote his own work but to introduce us to the newest generation of Japanese fashion designers. These were the people, he insisted, we had to write about. 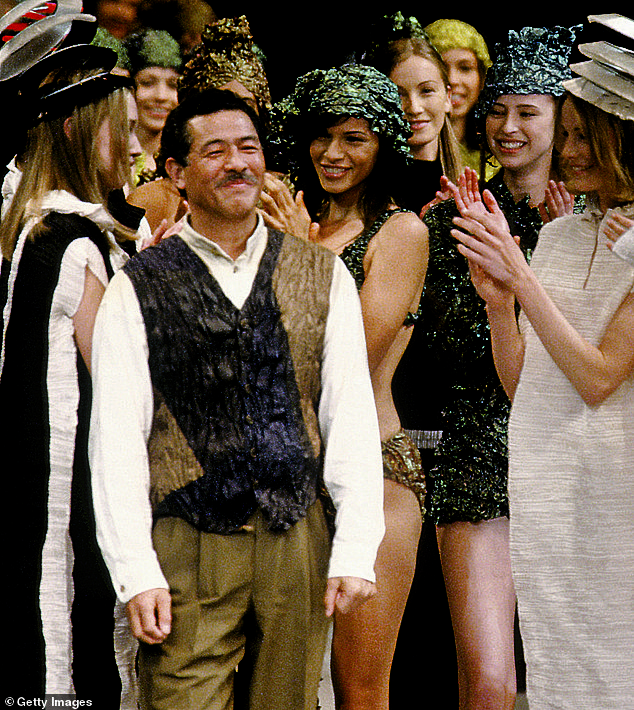 Designer Issey Miyakei during Paris Fashion Week circa 1993 in Paris. The designer introduced the world to a new wave of Japanese fashion designers

‘There was no one like him,’ remembers Professor Ron Arad, the acclaimed industrial designer who worked with Miyake on a student project for the Royal College of Art, a project which produced the Ripple chair. ‘I have met many amazing people but Issey had no equal in generosity, curiosity and creativity. When he launched A-POC (a piece of cloth) in 1998, the knitted tube with cut-out dotted lines for people to choose and shape their own garment, I did a chair for him and we styled the chair in the dress for the launch. It was fun and working with him there was always much laughter.’

The former Tate director and art historian Sir Nicholas Serota remembers that too. ‘Like others, I was astonished by the way he stayed true to his principles in a world that places such emphasis on celebrity. His humility and determination to stay close to his roots in his fascination with materials and the body in movement meant that he was inventive to the end. Everything seemed fresh and it appeared to come without effort, but that was because he ensured he gave himself time for thought and, importantly, laughter. He never took himself too seriously.’

Miyake’s approach to clothing was rational, innovative and joyful. There was a playfulness in the way a garment could be one thing, then a shrug of the shoulder, a flick of the wrist could make it something else. He loved colour, and the ‘space between the body and the garment’, the way they both moved in juxtaposition, flowing from one abstract shape to another. He welcomed contributions from other artists and creators in different fields. Artists Robert Rauschenberg and Christo became friends, as did costume designer Anthony Powell, inventor Sir James Dyson and photographers Lord Snowdon and Irving Penn (the latter volunteered in 1986 to shoot all of Miyake’s collections, which he did for over a decade).

When he happened upon a book on ceramics in a London book shop, Miyake fell in love with the purity of the work of potter Dame Lucie Rie. It resonated with the Japanese aesthetic of paring back to the essential shape. They became friends and he organised an exhibition of her work in Tokyo and Osaka where the pieces were displayed apparently floating on a gigantic rectangular pool, emphasising their tranquil stillness. Miyake used some of her multicoloured stoneware buttons on coats in a collection in 1989 and she left him the entire collection in her will when she died in 1995. 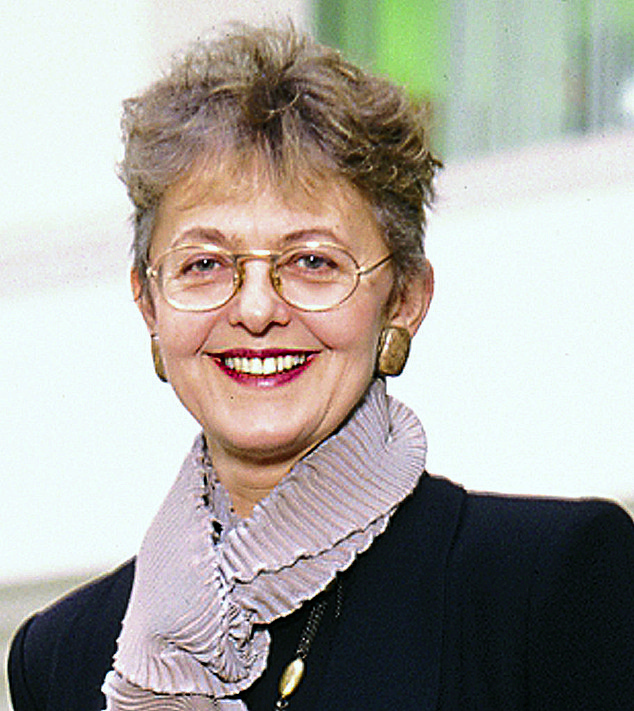 He is mourned by a swathe of women and men across the creative arts and industries, across the media, theatre and academia including fashion writer Brenda Polan pictured in an Issey Miyake scarf

Miyake, who always greeted everyone with wide open arms and a matching smile, was himself a great giver of gifts. Not having something to give frustrated him. Once, when he was not expecting to see me and had nothing prepared, he took the scarf from round his own neck and placed it round mine. A simple cotton scarf, but a beautiful thing. I still have it and love it. Ron Arad told me: ‘I treasure everything he gave me still.’

Miyake said often that he did not wish to be known as the designer who, as a seven-year-old, witnessed the atomic bomb explode over his hometown of Hiroshima in 1945, and whose health was compromised by it. He was drawn to clothing because he saw it as ever evolving and therefore optimistic. ‘Clothing in Japanese is fuku and fuku also means good fortune, happiness. And probably I am trying to make happiness for people. And for myself.’