When actor Shari Sebbens walked out of drama school onto the set of The Sapphires she was intimidated by the big picture role of director and thought she would be an "actor forever".

But she had a change of heart.

"I sort of graduated and just kept quiet for a very long time in rehearsal rooms and development rooms," she said.

"Every play I've done since, except for two, have been new Australian works so I'm really a big fan of creating new work and collaborating with artists in that way.

"Suddenly what was so terrifying to me – that big vision approach to directing a play – was broken down and became clearer and more accessible." 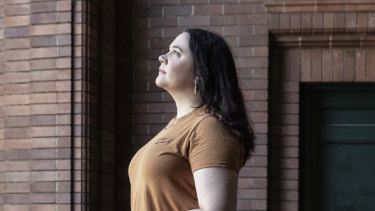 Shari Sebbens: the big vision approach to directing a play is no longer so intimidating.
Credit:Louie Douvis

On her second day she is still adjusting to the idea of having a desk at Fox Studios but hopes to be brought in on script development and actors' rehearsals and formally assist on a couple of productions.

Sebbens' acting credits include STC productions Black is the New White and The Bleeding Tree,  and she is recognisable in the new ABC television drama The Heights, playing Leonie alongside Marcus Graham.

Sebbens is soon to appear in Top End Wedding, a romcom shot in Sebben's hometown of Darwin, co-written by friend Miranda Tapsell, and to receive its 2019 premiere at the Sundance Film festival.

Tapsell and Sebbens met at NIDA. "It's very much a love letter to the country of the Northern Territory.  It's very much like art imitating life imitating art. I play Miranda Tapsell's best friend slash bridesmaid. That was in May last year and in December I was Miranda's bridesmaid in real life." 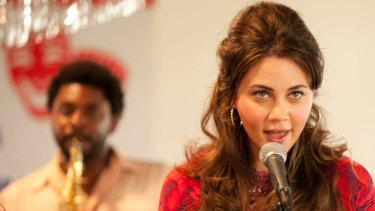 Shari Sebbens has a role in The Sapphires among her acting credits.Credit:

Of Bardi and Jabirr Indigenous heritage, Sebbens got the acting bug when she saw her first play, the musical Bran Nue Dae, written by her mother's cousin Jimmy Chi. "That was my first theatre experience, this big, mad, beautiful, black celebration of life."

After dropping out of high school she did a year-long course in Aboriginal theatre at the Western Australian Academy of Performing Arts, then successfully auditioned for NIDA.

Aboriginal theatre is going from "strength to strength" and Sebbens believes she has a responsibility in her career to create opportunities for other Indigenous artists.

The transition was also about pushing herself and "wondering what the difference is between a man who gives everything a go, a male actor who then goes on to be a director and just does it and [a] woman not feeling they can push themselves in the same way".