Now that “Wonder Woman 1984” is finally out around the world in theaters and on HBO Max, we can talk about that mid-credits scene.

Since press screeners for the new superhero sequel didn’t include the stinger, many in the United States just saw it for the first time on Christmas Day — and what a treat it was for fans of the character.

We’re about to dive into deep spoiler territory. You’ve been doubly warned.

So … who showed up as the end credits rolled out? OG Wonder Woman herself, Lynda Carter! No, she didn’t play a multiverse version Diana Prince, but appeared as a legendary Amazon warrior referenced earlier in the film named Asteria.

As Diana (Gal Gadot) explains in the movie, Asteria was the first person to wear the golden armor Wonder Woman rocks during her final battle with Cheetah and Max Lord. She was the greatest Amazon warrior to ever live, holding off mankind on her own so her sisters could escape slavery and to the safety of Themyscira. Diana eventually tracked down the armor, but never the woman who wore it.

While Asteria’s eyes are seen in the film itself, Carter appears in her full glory during the mid-credits scene. In the footage, Carter’s character saves a group of people from falling debris in a crowded marketplace. Wearing a blue cloak, she stops the collapsing pole by catching it with her hand — as one of her gold bracelets is seen. After giving a trademark twirl and telling a bystander her name — saying it’s “from my culture” — she tells the woman she’s been “doing this a long time” before giving a wink to the camera and walking off.

It’s unclear when and where this scene takes place, but it seems she’s been saving lives in her time away from the Amazons. Now when can we get these two Wonder Women to meet up?!

According to director Patty Jenkins, the scene was filmed when the movie did additional photography — but she “knew what it was going to be all along.” Both Jenkins and Carter have been vocal about Lynda making a cameo in the past and Carter has been very supportive of the new franchise. 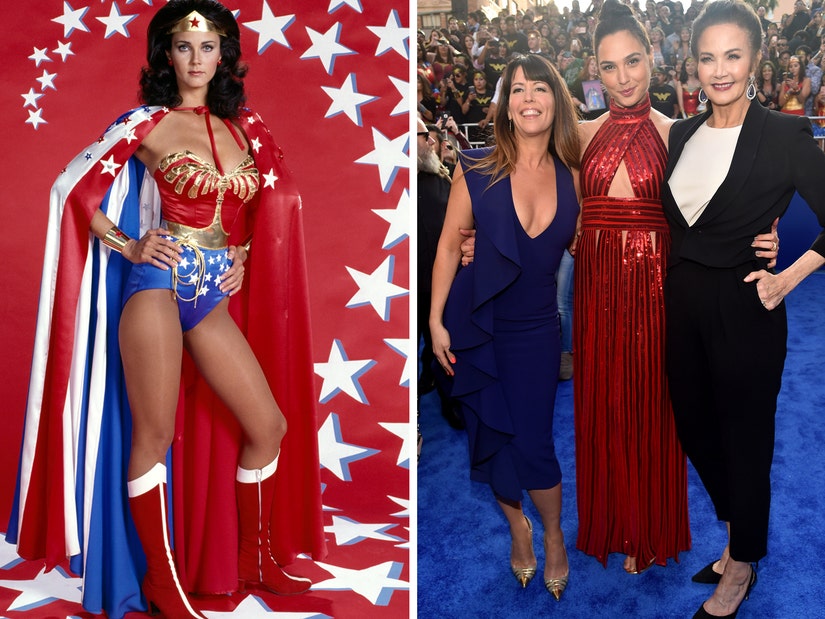