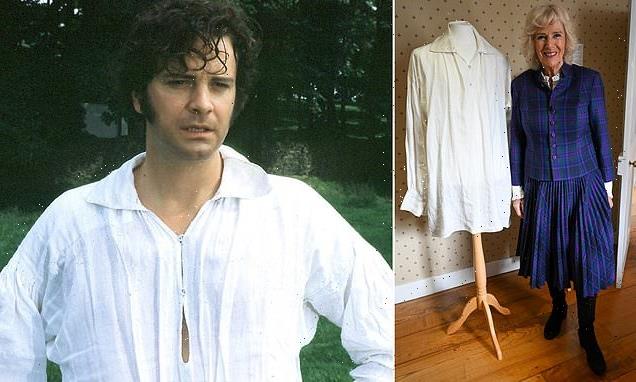 ‘It’s a bit sad Colin Firth isn’t in it!’ Duchess of Cornwall swoons over famous shirt worn by Mr Darcy in BBC’s 1995 adaptation of Pride and Prejudice as she visits Jane Austen’s home

The Duchess of Cornwall was left disappointed when a tour of Jane Austen’s former home featured Mr Darcy’s famous shirt – but no Colin Firth.

Firth’s brooding depiction of the aloof romantic hero, in the 1995 BBC adaptation of Pride And Prejudice, inspired a new generation of Austen readers.

Camilla, an avid Austen reader, is clearly among the fans who remember the scene where Mr Darcy emerged from a swim in a lake with his shirt dripping wet.

The Duchess was taken on a tour of the author’s former home in the village of Chawton, near Winchester in Hampshire, and was shown clothing from recent television and film adaptations of the 19th century author’s work, including Mr Darcy’s shirt.

‘But he’s not in it, that’s a bit sad,’ Camilla joked after being shown the shirt by Lizzie Dunford, director of Jane Austen’s House, who replied: ‘I know, that’s sad, and it’s not quite as damp as it was.’ 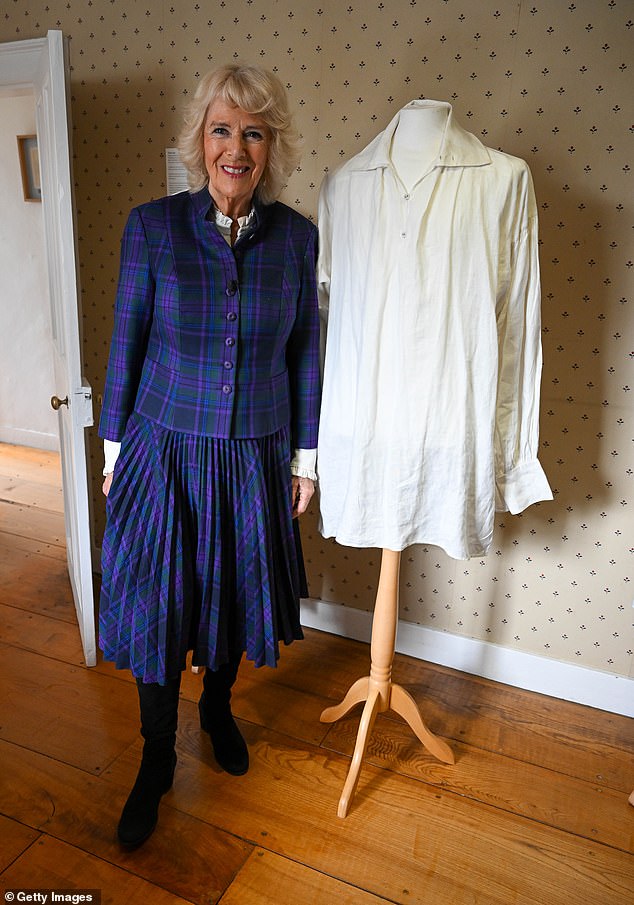 The duchess quipped: ‘You could give it a good spray.’

Austen lived at the home from 1809 until the year of her death, 1817, with her mother and sister, both called Cassandra, and friend Martha Lloyd.

During this settled period in her life she wrote, revised and published her six celebrated novels.

Speaking about Mr Darcy’s shirt, Ms Dunford told Camilla: ‘It’s a wonderful artefact, one of the reasons we wanted to show it was that 1995 production was so transformative for people loving Pride And Prejudice. 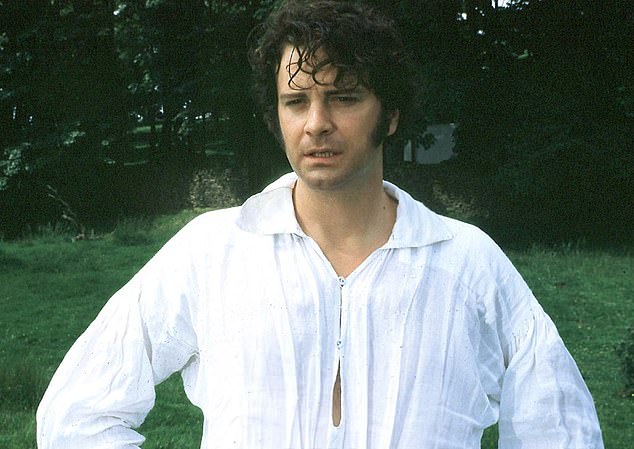 Firth set female hearts aflutter when he dove into a lake wearing the shirt while starring as leading man Mr Darcy in the BBC’s 1995 adaptation of Pride and Prejudice, the 1813 novel by Jane Austen

‘That scene, we all watched it, everyone, and this production brought so many people to Jane Austen, which is why it’s quite a significant artefact.’

Camilla cut an elegant figure in a stylish blue dress for the engagement in Alton, sweeping her blonde locks into her usual bouncy blow dry style.

It comes days after Camilla confessed her ‘heroine’ – Jane Austen’s feisty Elizabeth Bennet from Pride And Prejudice – would be her dream dinner party guest.

She was publicising The Duchess of Cornwall’s Reading Room online and on Instagram, the book club she started during the first Covid lockdown, sharing some of her favourite recommendations. 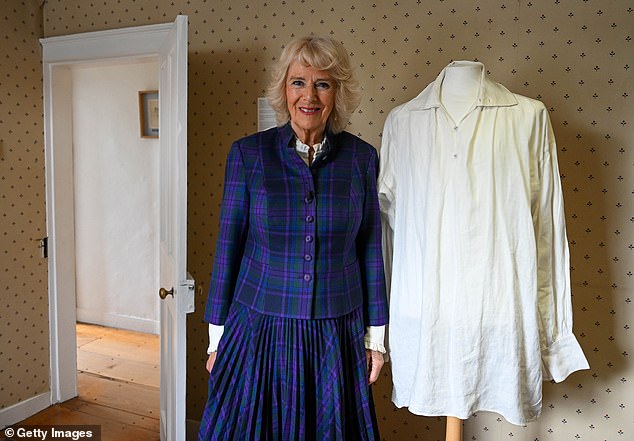 The royal was in high spirits as she arrived at the historic house earlier this morning, before being offered a tour where she was shown the shirt, alongside other memorabilia 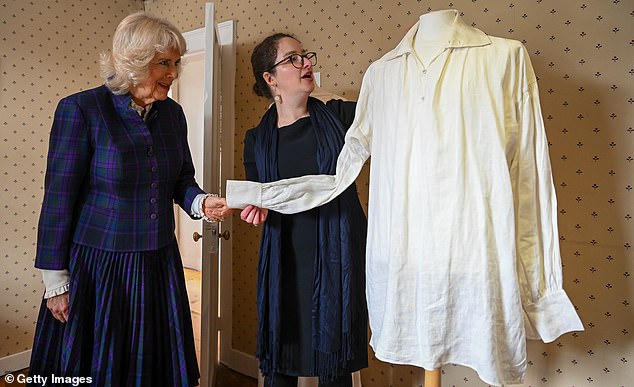 The Duchess appeared completely taken with the shirt, joking it was a ‘pity’ Colin Firth wasn’t in the shirt 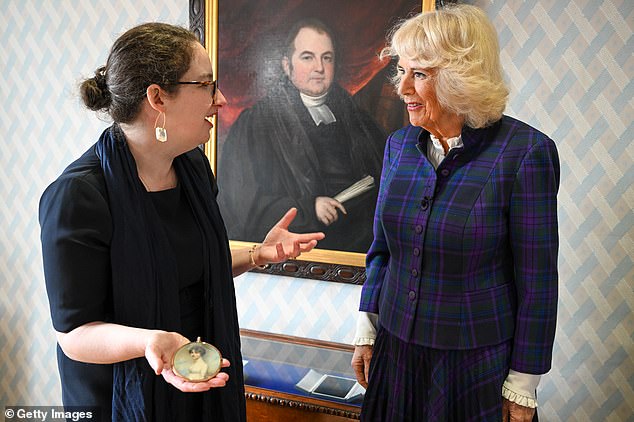 The Duchess, an avid Austen reader, was taken on a tour of the author’s former home in the village of Chawton, near Winchester in Hampshire

It has since attracted more than 130,000 social media followers and a raft of high-profile supporters including actress Dame Judi Dench.

Asked about why she thought literacy and reading was so important for young people, the duchess said: ‘Obviously you’ve got to learn to read first because if you can’t read, how are you going to get on in life? The earlier you can learn, the better.’

It’s not the first time the Duchess has spoken of her love for Jane Austen.

In an interview published in 2015 with First News, the children’s newspaper, Camilla admitted she rather admires the Pride And Prejudice heroine. 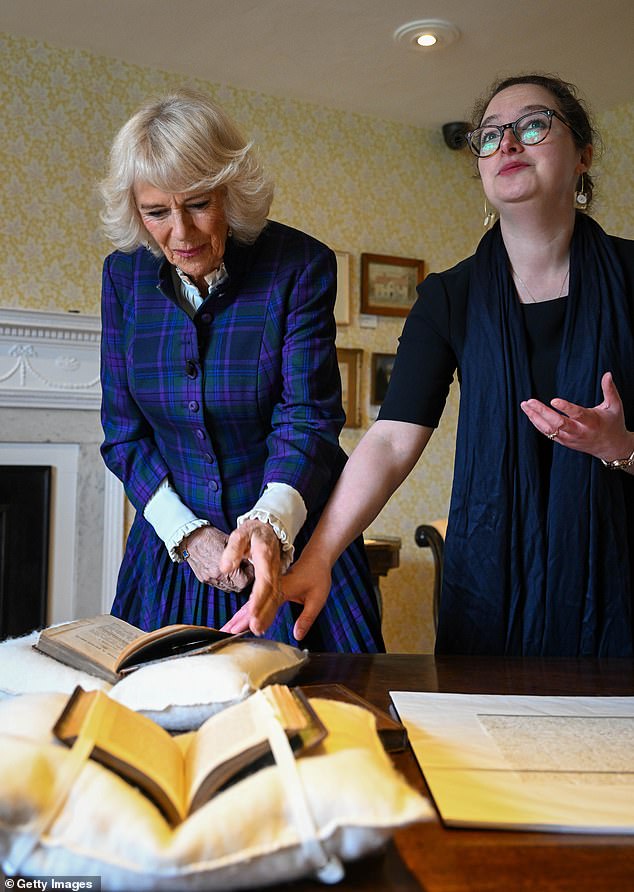 The royal was shown clothing from recent television and film adaptations of the 19th century author’s work, including Mr Darcy’s shirt 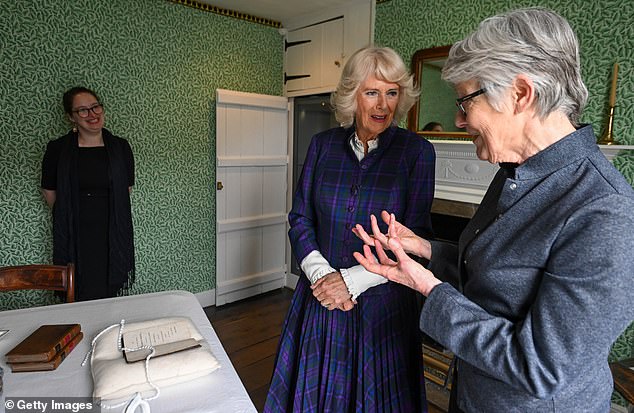 Camilla, who is known to be an avid Austen fan, appeared delighted to be touring the house earlier today

Since joining the Royal Family with her wedding to Prince Charles in 2005, Camilla has made the issue of literacy – particularly among children – central to her work and is patron of seven charities including the National Literacy Trust and First Story.

Camilla, who describes herself as a ‘voracious’ reader, said last year: ‘There is no friend as loyal as a book’ – a quote from US author Ernest Hemingway.

Prior to the service, she had cancelled a number of engagements as she continued to battle lingering side effects of Covid-19 after testing positive in February. 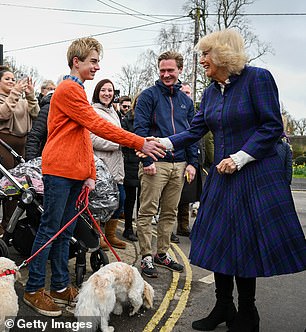 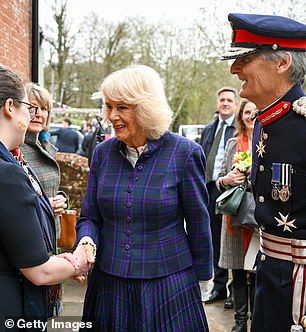 The Duchess went on to meet locals outside, and beamed as she shook hands and chatted to crowds of royal fans 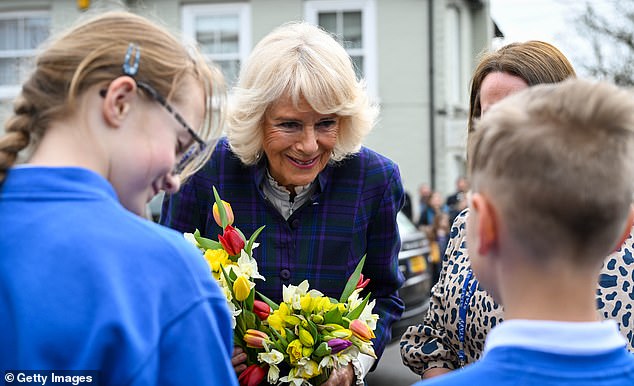 Camilla made the comment when hosting a reception to mark International Women’s Day at Clarence House.

The wife to the Prince of Wales revealed she was struggling to ‘shake off’ her bout of the virus from three weeks ago.

She said: ‘It’s taken three weeks and still can’t get shot of it. Probably my voice might suddenly go and I might start coughing and spluttering.’

She went on to cancel an appearance at an evening event, when she was due to meet High Commissioners and Commonwealth Secretariat staff with Charles.

And she also cancelled a visit to the Cheltenham Festival in March. 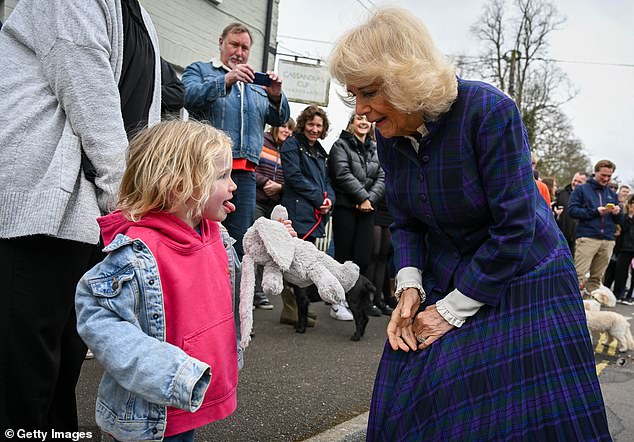 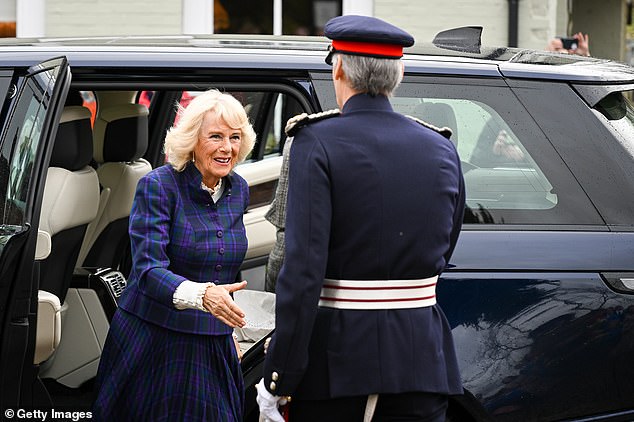 The Duchess, wearing an elegant blue gown, was beaming as she arrived at the engagement this morning