The economy may again be growing but it's way too early to hold a "I survived the COVID Recession" party.

Reserve Bank deputy governor Guy Debelle this week grabbed plenty of attention when he remarked that it appeared the economy had grown through the September quarter. 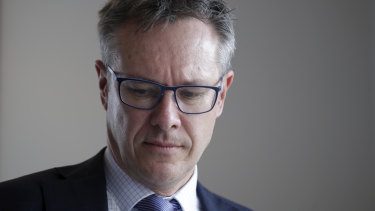 Guy Debelle said it appeared the economy had grown through the September quarter, but the RBA will next month likely sign off on a string of measures to help the struggling economy.Credit:Alex Ellinghausen

It's been so long since Australia endured a recession that many have forgotten that deep economic downturns leave long-lasting problems that can take years to overcome.

Prime Minister Scott Morrison noted as much on Wednesday when he was asked if the country had worked its way out of recession.

"I know Australians are still hurting," he said. "It is still a long road back. And there will be some deep scars there, economic and people's mental health. These will have to be healed."

It was a reflection on the same issues the Reserve Bank will seek to address with its package next week – that even though the economy may no longer be contracting, it's a long way back from where it needs to be.

And there are plenty of ongoing headwinds, not least the fact the coronavirus is still raging across much of the world.

There is still a huge amount of stimulus – both via the Reserve Bank and federal and state governments – sloshing around the domestic economy. Yet despite that support, there is ongoing pain.

Unemployment is tipped to continue climbing, probably to a point around 8 per cent. At least 200,000 people have disappeared from the official labour force while under-employment remains at extremely high levels.

In the housing market, around 17.5 per cent of high risk mortgages have deferred their repayments because of the crunch to their incomes.

Data from the Moody's ratings agency this week showed a continuing climb in the number of people falling behind on their mortgages. In the north-eastern Perth suburb of Ballajura, more than 7 per cent of mortgages are delinquent while in Sydney in the south-western suburb of Ashcroft the delinquency rate is approaching 6 per cent.

It's not just housing.

More than one in 10 small businesses have deferred their bank loans.

Despite the recession, the actual number of businesses being wound up has fallen due largely to temporary changes in insolvency laws. Once those protections are removed, insolvencies will start to climb.

Wednesday's inflation figures confirmed the recession is still very much a part of the broader economic picture.

Remove the one-off impact of the end of free childcare, consumer prices through the September quarter lifted by just 0.7 per cent. The only goods showing consistently strong increases are alcohol and tobacco, driven up by higher government excise rates.

All the while, the federal government is running a budget deficit of almost $20 billion a month through such measures as JobSeeker, received by almost 1.6 million unemployed Australians.

The Australian Bureau of Statistics will release the September quarter national accounts on December 2. If the Reserve Bank and others are correct, it will show the economy returning to growth. 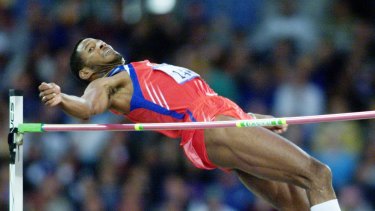 Any growth will come with a series of hurdles and a budget deficit even high jumping great Javier Sotomayor would struggle to clear.Credit:Palani Mohan

But it will be growth with high unemployment, business profits supported by government handouts, millions of people struggling to repay either their mortgage or small business loan, record low interest rates and a budget deficit even high jumping great Javier Sotomayor would struggle to clear.

It's way too early to put up the balloons and bunting to celebrate the end of the recession.

The most important news, analysis and insights delivered to your inbox at the start and end of each day. Sign up to The Sydney Morning Herald’s newsletter here and The Age’s newsletter here.