DOMINIC SANDBROOK: Have these arrogant MPs any idea of the damage they’ll wreak on our democracy if they ignore the national interest?

At the weekend I took my son to London, and as we walked along the South Bank we gazed across the Thames at the Palace of Westminster.

It is one of the most familiar buildings in the country, but not even the best-framed TV shot can capture the grandeur of Charles Barry and Augustus Pugin’s Gothic creation.

At the time of their redesign, in the late 1830s, Britain was nearing the peak of its imperial power.

This was a building fit for giants — an arena where statesmen such as Benjamin Disraeli, William Gladstone, Winston Churchill and Clement Attlee did battle in the name of the national interest. 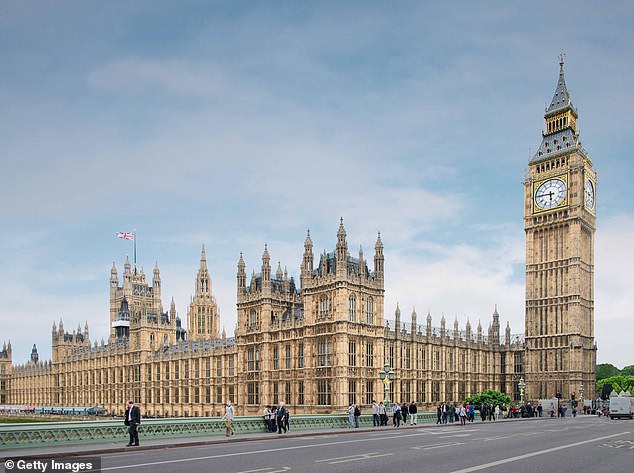 Savouring the view (pictured is the Palace of Westminster), I wondered if there had ever been a greater mismatch between a building and its inhabitants

Savouring the view, I wondered if there had ever been a greater mismatch between a building and its inhabitants.

In five days’ time, the successors to Gladstone and Disraeli will vote on perhaps the most important question since World War II.

If Theresa May’s deal fails, as seems likely given the number of Tory MPs who have said they will vote against it, British politics will be plunged into the greatest uncertainty in our lifetimes.

We may crash out of the EU without a deal, with calamitous economic results.

We could equally see demands for a second Brexit referendum, which would drive a wedge between Remainers and Leavers, inflame our national divisions further and poison our politics for a generation.

With Labour planning to trigger a no-confidence vote, there looms the spectre of a government led by Jeremy Corbyn, the most far-Left Labour leader in our history.

He is an apologist for terrorism whose policies would hammer the middle classes, destroy investment and inflict debts on our children and grandchildren.

Whatever your views of Mrs May’s deal, there is no doubt that the stakes could not be higher.

I find it incredible that so many of our MPs continue to treat this as an inconsequential game — an opportunity for posturing and grandstanding — rather than as the most serious political decision in living memory. 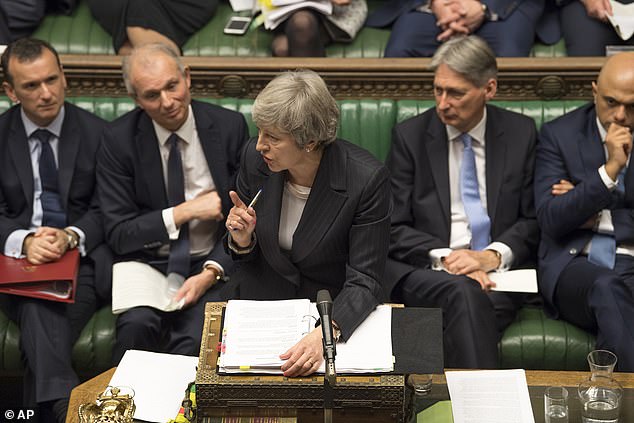 Theresa May gives a reply to lawmakers during the scheduled Prime Minister’s Questions, in the House of Commons on Wednesday

And with the clock ticking, I find it equally incredible that on Tuesday they wasted so much time and effort in humiliating Mrs May’s Government over constitutional trivialities.

Notably, they found ministers in contempt of Parliament for refusing to publish the full legal advice on the Prime Minister’s proposed Brexit deal.

Did the legal advice tell us anything new? Not really. Will it alter the outcome? No. Was this a sensible way of promoting the national interest? Absolutely not.

To anybody outside Westminster, it is obvious that this was merely a shameless exercise in narcissistic self-indulgence.

It was a way for Mrs May’s critics, both in Labour and, unforgivably, in her own party, to flex their muscles at her expense.

Yet it pales in comparison with the shameful farrago of Tory Remainer Dominic Grieve’s amendment — aimed at stopping a no-deal Brexit — which will give Parliament a direct say in what happens if the Commons rejects Mrs May’s deal next Tuesday.

After it passed, Mr Grieve and his supporters were quick to congratulate themselves on ‘taking back control’, a dig at the Leave campaign’s slogan.

But who are they taking back control from? The Government? Or the British people?

As regular readers will know, I voted Remain. According to some of my correspondents, that means I should be prohibited from expressing any opinion on this issue, since I have already revealed myself as a traitor to the national cause. 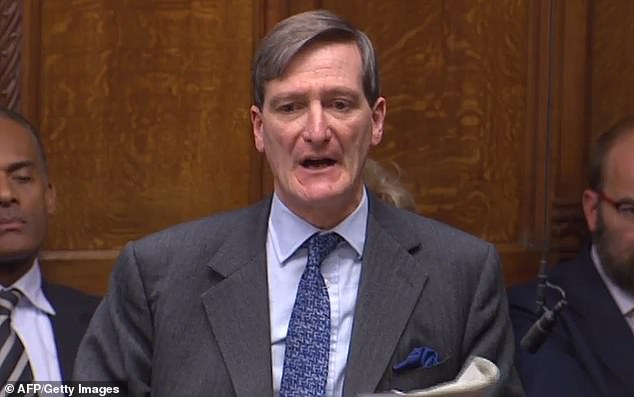 But like millions of people who voted Remain, I accept the decision. Britain voted to leave, so we should leave. A second referendum would be a betrayal of democracy.

Mr Grieve, however, who loves to pose as the cerebral, oh-so-liberal defender of constitutional propriety against the vulgar masses, does not agree.

According to his rather peculiar logic, it would be more democratic to re-run the referendum than to respect it.

But has it not occurred to him how the 17.4 million Leave voters would react to being told to vote again by the public-school educated son of a Tory MP, with a fortune worth an estimated £3 million?

Does Mr Grieve not care about the poisonous effect this would have on the image of democracy, or the wedge it would drive between the political class and ordinary voters?

As International Trade Secretary Liam Fox remarked, Mr Grieve’s amendment will look like an attempt to ‘steal Brexit from the British people’.

Alas, Mr Grieve has been far from alone in seeing the looming political showdown as an opportunity to polish his principles and play to the gallery.

Last week I was appalled by the sight of the former Brexit Secretaries, David Davis and Dominic Raab, smirking with self-congratulatory hilarity on winning The Spectator’s ‘resignations of the year’ award. 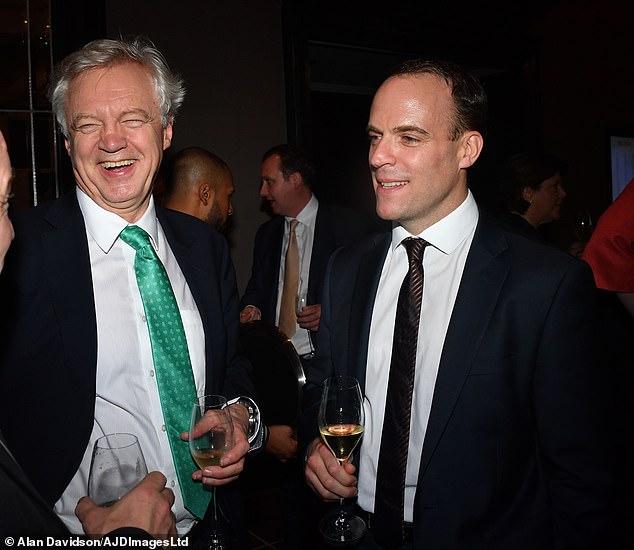 They had a chance to stamp their authority on the negotiations, and they failed. Then, faced with the collapse of their infantile fantasies about how easy it would be to unpick a 40-year political and economic relationship, they ran away.

I doubt I am alone in finding it nauseating that while the exhausted Mrs May stands in the Commons day after day, patiently repeating that this is the best deal we can expect to get, these cheap cowards are slapping each other on the back at an awards dinner.

Whatever you think of her — and no, she’s not perfect, just as her deal isn’t — there is no doubting her sense of duty.

By contrast, posturing non-entities such as Mr Grieve and Mr Raab, for ever lecturing us about their principles (and, sadly, bringing great discredit on their shared first name) feel a duty to only themselves.

Even now, with less than a week until the vote, with the prospects of a no-confidence vote, a no-deal exit and a Corbyn government growing by the day, these monsters of self-aggrandisement still act as though it is all just a game.

I suppose they think they will be all right. And as rich men, no doubt they will. But what about ordinary people whose jobs depend upon our international trading links?

What about the democratic damage that would result from telling Leave voters their votes are worthless?

And what about the families whose prospects would be shattered by the recession that the Governor of the Bank of England and most business leaders see as the most likely result of No Deal?

The irony is that Mrs May has won a much better deal than many, including me, thought possible.

Yet in their determination to belittle her and vaunt themselves, our MPs seem determined to throw it away.

If they do — and if, as I fear, the result is a no-deal Brexit and a Corbyn government — I think it would be the greatest self-imposed calamity since the loss of the American colonies in the 1770s and 1780s.

Then, as now, legions of MPs put posturing above a compromise that might have averted a devastatingly divisive conflict.

They, too, droned pompously on about the tremendous importance of the rights of Parliament, even as the world outside slid towards disaster.

Then, Britain rapidly recovered. But does anyone really think a rapid recovery is likely if we crash out without a deal, if we spend the next few years re-running the referendum, or if we end up under a quasi-Marxist Corbyn government?

As the Mail’s poll showed last week, the British people think Mrs May’s deal is the best for the country and the economy, and want our politicians to get behind her.

Why are MPs so arrogant, so deluded, so self-indulgent, that they won’t listen to reason? Their predecessors would have put the national interest first. Why won’t they?