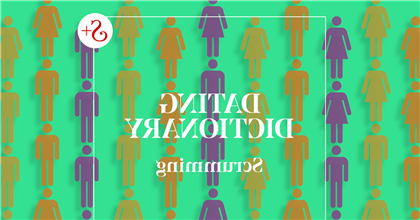 As Stylist’s digital writer, Lauren Geall writes on topics including mental health, wellbeing and women’s issues. She’s also a big fan of houseplants and likes to dabble in film and TV from time-to-time. You can find her on Twitter at @laurenjanegeall.

‘Scrumming’ offers a more fun and laidback approach to meeting new people for those looking for a less stressful dating experience. Here’s everything you need to know.

Meaning: scrumming is a form of group dating which sees potential couples get together for their first dates to make the whole affair feel less awkward (and more fun). That way, the whole thing becomes a group effort – kind of like a scrum in rugby.

Origin: scrumming was coined by Match.com as part of the platform’s 2023 dating trends report. It reflects a growing desire among single people to make dating fun again, so that even if things don’t work out, the whole thing doesn’t feel like a waste of time. Clever, huh?

So let me get this straight, it has nothing to do with rugby? No, the term ‘scrumming’ simply refers to the group element associated with the trend – I’m not sure suggesting a game of rugby for a first date would go down so well.

Fair enough. Tell me more – how does it work? Scrumming is pretty simple, really. There are two ways to go about it – either you and a potential partner go on a first date with an already established couple, or you team up with some single friends to go on your first dates together. The former might be a little awkward – especially if the couple you’re with are very lovey-dovey – so the second option might be best.

Hold on a second, what’s wrong with going on a date on your own? There’s nothing ‘wrong’ with a one-on-one date, but for people with dating anxiety, the idea of meeting up with a stranger can be pretty stressful. In this case, having a friend by their side can give them a much-needed boost of confidence. Plus, if things work out, then you can spend time one-on-one getting to know each other better on your second date.

I can kind of see the appeal. So what kinds of dates would ‘scrumming’ suit? Any normal first date activities will work, whether that’s going for drinks or doing an activity like mini golf or bowling. You might even get a group discount if there’s loads of you!

And what happens if one of you is very *not* into their date? It depends. If someone is making them feel uncomfortable, then that’s a no go. But if they’re just not feeling things, scrumming means that the night doesn’t have to be a complete write-off – they can just enjoy getting to know everyone and spending the night with their friends.

I like your positive attitude but how should you broach the idea of scrumming to a potential partner? What if they think it’s a sign you’re not really interested? That probably won’t happen – after all, you’re still saying yes to going on a date with them – but if it does, just be honest about why you want to go out as a group as opposed to one-on-one. Most people will understand, but if they don’t, then they’re obviously not the right person for you.

You’ve got more ruthless in 2023 and I like it. Well, I learned it from an expert.