I’ve been clearing out and reorganising the pantry. My plan is to get it into some semblance of order before S comes to mind our house for a month. Ideally, I’d like to introduce some kind of Dewey classification system of foodstuffs – for instance, all the Asian things in their own category, all the grains, et cetera. I can dream. At the very least, I don’t want her to be hit by falling foodstuffs.

Not that a half-used packet of pasta to the skull would be fatal, I guess, although it could take out an eye. On the other hand, cop a falling jar of polenta and you’re talking concussion. Only the other day I had to catch a kilo of flour that came crashing down when I tried to ease out the brown sugar. I came close to turning a whiter shade of pale. 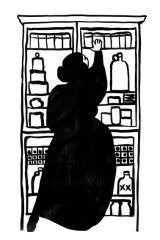 Time to clear out the pantry.Credit:Christina Zimpel

This might suggest we have a walk-in pantry, large enough for fatalities to occur. We don’t. We have a small, badly designed one with lots of narrow cut-away shelves where things sit on the edge of their seats and a few low fixed shelves that are impossible to see into. The low shelves are where the back-up mustard, caper and curry-paste crowd like to hang out in a Stygian gloom, mixing it with the crazy spice gang and confident they won’t be discovered before the turn of the next century.

I dream of having Nigella Lawson’s pantry. Hers is so walk-in she even has a full-size door on it with a big sign saying “Pantry”, just in case visitors mistake it for a spare bedroom stocked with snacks.

These days, a lot of people like to build in a “butler’s pantry”. It’s basically a small second kitchen, with a second set of appliances, cupboards, sink, etc. It’s not really about food storage as far as I can see, more about having somewhere to hide all the mess of actual cooking, so your minimalist benches in the big kitchen stay minimalist.

This is how Stanley Ager, former butler to the gentry and an adviser to Downton Abbey, describes the traditional butler’s pantry in grand English houses (I covet it all – the pantry, the house, and maybe even a Stanley Ager): “Most pantries had good natural light, and there was always a fire burning in the grate. They usually had wood floors and fairly high ceilings. Ideally, they were large enough to hold four working men as well as a wooden table 10 feet long by four feet wide … We had two or three high stools instead of chairs, so when we sat down our coat-tails could pop down each side without becoming creased.” You’ve got to hand it to the English aristocracy. They think of everything.

The English also have – or used to have – larders, naturally cool rooms where perishables could be stored. In Australia, our larder is the fridge, essentially a pantry with more alarmist use-by dates to help you sort stuff.

Fun fact: use-by – or “sell-by” or “best-by” – dates are a pretty recent phenomenon. They didn’t really get under way until the 1970s, and it is the manufacturers themselves who set the dates. You hope their systems are based on science, not sales opportunities. I was annoyed to see a certain artisan bread, now sold in the supermarket, has changed its dating method. It used to have a “baked-on” date, so you knew how fresh it was. Now it has a “best-by” date.

A lot of foodies, except those worried about dying a horrible death from botulism, say they ignore the use-by dates and go by look and smell. Even mould on jam is okay apparently, as long as you scrape off every little bit. But just in case you were go all Bear Grylls with a mouldy steak, expert opinion says you should avoid eating items like meats, nuts and soft cheeses (such as cottage cheese or ricotta, or sliced or crumbled cheese) that have mould on them.

I can see the pantry sorting is going to take some time. I’m only up to the second shelf and feeling overwhelmed by the chaos that surrounds me. When chefs are asked to describe the contents of their pantries, they rattle off neat lists of things like bronze-cut pasta, Ortiz anchovies, Ligurian olive oil, San Marzano tomatoes. Nigella admits to Vegemite, but no one ever mentions pine nuts with weevils, or half a packet of stale rice crackers, or a stray ancho chilli trapped under the Tetra Pak of almond milk.

Our problem is simple: we have too much stuff, for too many different cuisines, in too small a space. Hence the mysterious collection of little packets tied with rubber bands and things like a lifetime’s supply of date molasses, bought for a dish that required one tablespoon. There are always loads of tinned tomatoes, of course, because one of us is always convinced we’re out of them.

Order needs to be restored. In a cluttered pantry, you can’t find what you need so you end up buying everything twice, or more. I think that’s how we’ve come to have 35 cinnamon sticks.