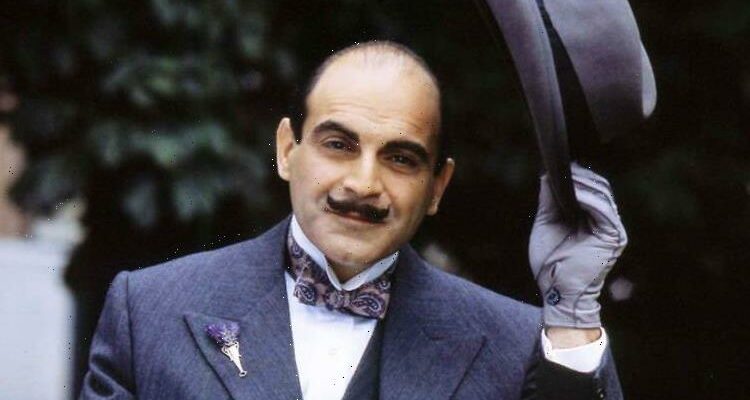 Across 15 years and 70 episodes, the actor created the definitive version of Agatha Christie’s iconic detective (sorry, Sir Ken Brennagh). So, to see the man “mince” across the stage, bring out a framed and mounted moustache (which caused so many problems for the ITV lighting guys they wrote him a poem about it) or silver-tipped cane, and explain the Poirot-perfect reasoning behind that high whispering voice, is understandably the highlight of a delightfully elegant evening.

The evening is set up as an informal chat on stage between the actor and his close friend, author David Wansell, who soft serves questions that prompt ‘spontaneous’ anecdotes and reminiscences. Suchet bounds on, waving and smiling, and warmly thanks everyone for coming. Despite the often prickly and particular characters he has become known for, the man himself is affable and engaging.

He happily recounts actorly horror stories of falling flat on his face on opening nights, earning his stripes in regional repertory theatre and falling madly in love at first sight with his wife of 46 years, fellow actor Sheila Ferris. They celebrate 50 years together this year, but Suchet still looks back fondly on early days travelling the canals to each regional theatre engagement on their houseboat.

There are also touching memories of entertainer grandmother Elsie who recreated her signature music hall Sand Dance in castor sugar on the kitchen floor, and the moving moment his stern father first smiled in acceptance and pride watching his son perform as Poirot.

The fact Suchet and Wansell have been doing the same thing on and off on this tour since 2020, means there is a slightly meta sense of watching two real friends ‘act’ out a conversation, but it is done with such charm and sincerity that few would quibble. There are no truly penetrating revelations about Suchet or any of the famous faces he has worked with.

This is the theatrical equivalent of being wrapped in a cosy cashmere blanket, and in troubled times (and frankly miserable weather), it’s just the ticket. The well-worn stories of finding Poirot’s walk by clutching a penny between his buttocks or learning how to cut a mango from Prince Phillip (which famously found its way into a Poirot episode) are as delightful heard (and reenacted) for the first or umpteenth time.

A prolonged second-act masterclass on how to read and act Shakespeare and more is fascinating, if a little overlong, but ultimately all roads lead one way.

The peculiar Belgian detective symbolises everything about the way Suchet approaches every role. He absolutely believes in finding any character on the page, spurred on in this case by Christie’s daughter Rosalind Hick’s exhortation to never make Poirot funny or ridiculous.

Suchet started with Christie’s description that her creation was a “walking brain”. The evening rightfully builds to an extraordinary demonstration of how the actor “found’ the voice. He starts with his own richly rolling voice in the base of his diaphragm and slowly moves it up through his chest throat, mouth and head, finally taking it “behind my eyes” and “voila” there he is.

It is wonderful to watch and chimes delightfully with another reminiscence about meeting sweet old lady on the streets of Hastings when he was filming the iconic show. When she greeted him as Poirot, he made the snap choice to stay in character, so when she asked him what he was doing, he told her he was “en vacances” there. As she happily walked away, she called, “Thank you for choosing Hastings for your holiday, Mr Poirot.”

From Poirot to Lady Bracknell, Blott on the Landscape, Sigmund Freud, Reilly, Ace of Spies and so many more, audiences have much indeed to thank this singular star for.

DAVID SUCHET: POIROT AND MORE AT THE HAROLD PINTER THEATRE TO JANUARY 22