Former Brexit secretary DAVID DAVIS: The utter folly of defeatist Mrs May taking No Deal off the table

Were there ever a need for confident and decisive government, it is now. The Prime Minister appears to be encircled.

Mutinous ministers write articles for the Daily Mail in which they threaten to quit, the Labour Party opportunistically rallies for a second referendum, breaking its promises to the electorate, and parliamentary plotters aim to break centuries of convention and good practice to seize control of the executive away from our Government.

I would not blame the Prime Minister if she felt isolated. Who could blame her for looking for a way out? The right playbook however is Churchill’s. Keep buggering on. This is not the time to capitulate, to fold and to be defeatist. Now is the time to stand firm and hold our nerve.

Mrs May’s announcement yesterday in which she conceded two Commons votes on Brexit in mid March is the wrong move. It sends the wrong message to the EU. Opening up the possibility of ruling out No Deal, or extending Article 50, may harm our negotiating position. 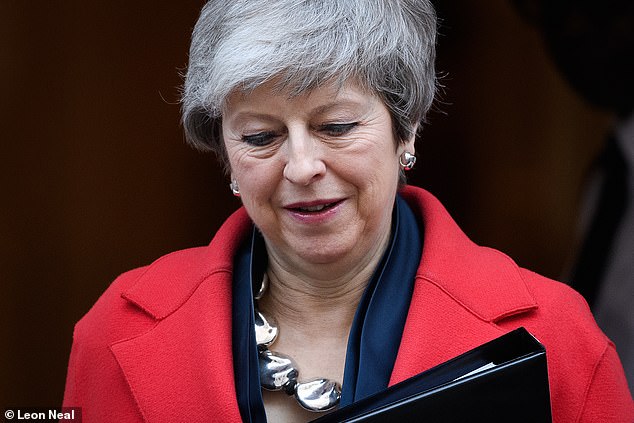 ‘I would not blame the Prime Minister if she felt isolated. Who could blame her for looking for a way out? The right playbook however is Churchill’s. Keep buggering on,’ writes David Davis. Theresa May leaves 10 Downing Street to address Parliament on Tuesday

As we enter the end game in negotiations with the EU, it would be folly of the highest magnitude to take No Deal off the table now because it takes away our leverage in negotiations and is against our national interest.

Let’s be honest. Many of those who want to take No Deal off the table are not seeking to ensure the UK obtains the optimum Brexit deal. Their real agenda is to block Brexit or secure one which is little more than a Brexit in name only.

Various Commons amendments drawn up by Labour’s Yvette Cooper in discussion with some Conservative Remainers, which would veto a No-Deal outcome, were wrecking amendments that would leave a poisonous constitutional legacy and break the solemn commitments made in the Conservatives’ 2017 election manifesto. Jeremy Corbyn’s support only reinforces my view of this.

It is time instead to focus on what actually unites our Government, our party and our country. Record numbers of Britons who voted for Brexit want it delivered on time. Above all we all want an orderly exit from the European Union. 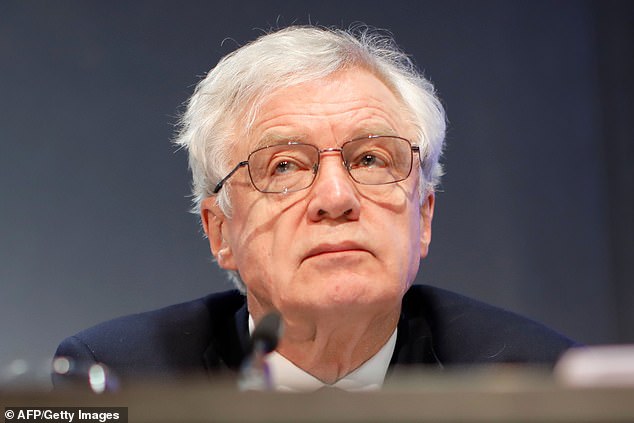 The Haltemprice and Howden writes: ‘Mrs May’s announcement yesterday in which she conceded two Commons votes on Brexit in mid March is the wrong move. It sends the wrong message to the EU. Opening up the possibility of ruling out No Deal, or extending Article 50, may harm our negotiating position.’ Mr Davis is pictured at the launch of a proposed UK-EU free trade agreement in London on February 6

The public has always been ahead of and more relaxed on No Deal than politicians. They are right to be. An anonymous civil servant recently said there are ‘hundreds of No-Deal plans across all government departments just waiting for the green light from ministers to be made public’. I know this to be true. Most of it I initiated in my first days as Brexit Secretary. It will be a sad day indeed if British politicians show such contempt for the public, and I fear the electoral consequences for my own party.

For MPs now to try to blackmail the Government into surrendering its negotiating position, rip up constitutional conventions and seize control of the executive in order to obstruct Brexit, is an abuse of the parliamentary process and an affront to democracy.

If MPs use the enormous powers they enjoy to thwart the expressed will of the people, that is a constitutional travesty. Such a blatant dismissal of the wishes of the public is contempt for democracy and for millions of Britons.

Conservatism is based on pragmatism and realism. Which is precisely why we should now hold our nerve and see these negotiations through. The passing of the Commons amendment by Conservative MP Sir Graham Brady last month with its legally binding changes to the Northern Ireland backstop showed the way forward for the Prime Minister. It showed that there is a majority in Parliament for an improved EU withdrawal agreement and orderly Brexit.

What on earth will be the consequences for our party if we don’t do this? Only this weekend the Conservatives’ national convention voted overwhelmingly in favour of leaving No Deal on the table and no delay to Brexit. It said scuppering the UK’s departure from the EU would ‘damage democracy and our party for a generation’.

We must unify the party around the Brexit the British people clearly voted for and offer them the optimistic future they deserve. It is also in our national interest.

The Prime Minister should ignore those ministers currently having a panic attack about the prospects of No Deal. Their fears are certainly exaggerated. More critically, while No Deal might – might – be economically difficult, No Brexit would be a democratic disaster.

Ignore the saboteurs, the wreckers, and the blackmailers. Don’t concede ground. Free our minds of doubt and danger. We can achieve it. Hold our nerve and deliver what we promised.