If Santiago Sierra had decided to go to Charlottesville, Virginia, and soak the Stars and Stripes in Native American or African American blood he would have had the most explosive artwork in the world. In the United States the flag is a sacred talisman for nationalist groups, including every form of extremist. Can one begin to imagine the Trumpian response to such a piece?

In Hobart, as the latest iconoclastic art event sponsored by Museum of Old and New Art founder David Walsh for his Dark Mofo festival, Sierra’s Union Flag will see the British flag soaked in the blood of First Nations people from colonised territories. It will still pack a punch – creative director Leigh Carmichael said on Monday afternoon that the festival understood and respected “the many diverse views in relation to this confronting project” – but it taps into a different reservoir of public sentiment.

The flag is a fetish in most countries but will Australians feel a righteous indignation at sight of the Union Jack being defiled? Sierra’s piece feels like a shot across the bows on behalf of local Republicanism. Despite the Union Jack’s presence in the top left-hand corner of our own flag, for many Australians it’s an unwelcome intrusion. 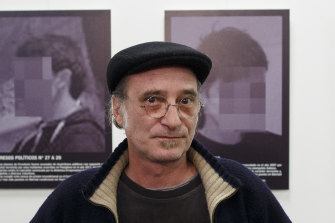 There may even be a cathartic aspect in watching the emblem of Great Britain drenched in a vat of Indigenous blood. It gives the reassuring, albeit false, impression that the indignities inflicted on First Nations people in the name of western civilisation were perpetrated by the Mother Country, not by us. In a post-Freudian world it’s so tempting to blame everything on an unhappy childhood. If we did take part in the odd massacre and act of dispossession it’s because of the way we were brought up, isn’t it Doctor?

On the other hand there are plenty of white Australians, including almost everyone who attends contemporary art exhibitions, that would see Sierra’s work as a fair comment on the ravages of colonial history. The culture wars that raged so fiercely in the Howard era seem to have given way to a quiet consensus that the colonial occupation was not exactly a good thing for Indigenous Australians, especially in Tasmania, where the native inhabitants were hunted down, cajoled into submission, removed from the mainland, and left to sink into the depths of misery and alienation.

If there is a point at which Union Flag will draw anger it’s in the use of blood donated by First Nations peoples – Dark Mofo have opened “expressions of interest” to those from countries and territories colonised by the British Empire. Blood is one of the most emotionally charged of all cultural symbols. In the past we have talked of blood and race as if these terms were interchangeable, but as we now know all human beings share the same range of blood types. Blood is not something that distinguishes one race from another, it is something that unites us, regardless of creed or colour.

When blood appears in art, history or literature it’s almost always associated with violence. We speak of “blood-soaked” episodes in history. In Exodus, God turns the Nile into a river of blood to convince Pharoah to release the Israelites from bondage. In 1968, British politician Enoch Powell delivered his infamous “rivers of blood” speech, which invoked Virgil to warn of the dangers of unchecked immigration.

Sierra describes Union Flag as “an acknowledgement of the pain and destruction colonialism has caused First Nations peoples, devastating entire cultures and civilisations.” In brief, it’s a gesture: a dark, morbid, forbidding reminder of the numberless brutalities inflicted by one group of people on another over the course of several hundred years. Sierra is tearing open an old wound that has barely healed, conjuring up ghosts that many would prefer to see left in peace.

Will it prove controversial? I’m sure Walsh hopes so, but he’s been disappointed in the past by the way the most challenging and confronting artworks are so readily accepted by an audience eager – almost too eager – to be challenged. Union Flag poses the biggest problem for those who will perceive only a one-sided insult to Australia’s British heritage. It focuses unashamedly on the negative aspects of that legacy, not the positive. For those in power it would be more convenient if art were simply a celebration that allowed all problems to disappear.