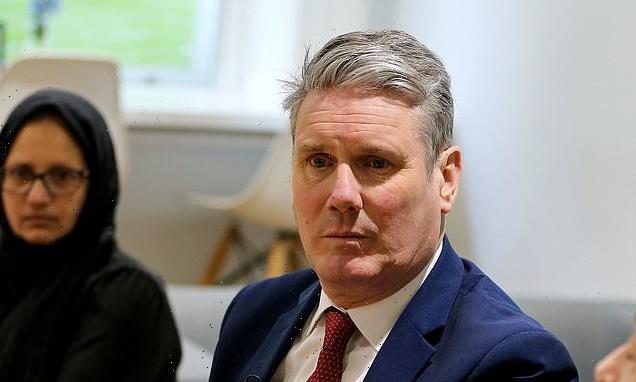 DAN HODGES: Keir Starmer is doomed if he listens to woke advisers over legions of women voters

Last week Keir Starmer was asked a simple question. ‘Can a woman have a penis?’ interviewer Nick Ferrari enquired on LBC radio. This is what followed.

Ferrari: ‘… sorry, have I offended you?’

Starmer: ‘I don’t think that… um… discussing this issue in this way helps anyone in the long run.’

Finally, Starmer retreated to the safety of the usual boilerplate: discussions on legal reform, a vague commitment to the protection of women, and an even vaguer condemnation of ‘intolerance’ by people unnamed. But by then the damage was done. 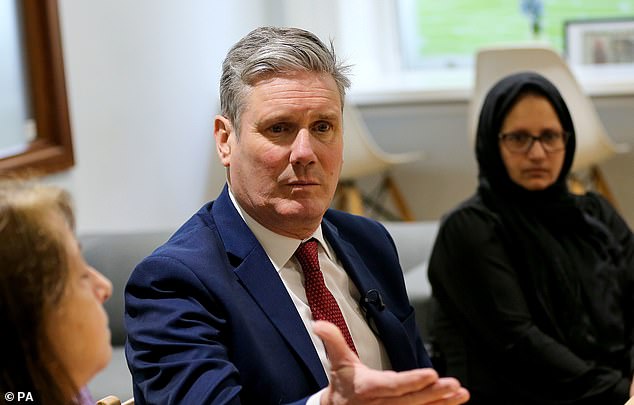 Labour’s leader is correct when he says the debate surrounding those men and women who wish to self-identify as a different gender must be conducted with respect and compassion. But it also needs to be conducted with honesty

‘He’s made a lot of the backbenchers angry,’ one Labour MP told me. ‘The women in the party aren’t happy. He’s not consulting with them on this. He’s got all these young blokes from London in his office, advising him. And it’s also rubbish politics. People in the Red Wall aren’t going to buy this.’

Actually, Starmer’s stammering equivocation might be taken as a sign of progress. Last September he was willing to condemn unreservedly anyone who asserted only women can have a cervix.

‘It shouldn’t have been said,’ he chided, in comments aimed at one of his own MPs, Rosie Duffield.

Labour’s leader is correct when he says the debate surrounding those men and women who wish to self-identify as a different gender must be conducted with respect and compassion.

But it also needs to be conducted with honesty. Which means recognising Sir Keir doesn’t really want a dignified debate over trans rights. What he really wants to do is brush the whole thing under the carpet and talk about the NHS and fuel bills instead.

He can’t. And one of the reasons he can’t is Boris Johnson isn’t going to let him.

A fortnight ago, the Prime Minister went out of his way to tell the House of Commons he believed ‘when it comes to distinguishing between a man and a woman, the basic facts of biology remain overwhelmingly important’.

Last week, at a dinner with Tory MPs, he opened his speech by saying: ‘Good evening, ladies and gentlemen. Or, as Keir Starmer would put it, people who are assigned female or male at birth.’

This crass attempt at humour rebounded hours later, when Conservative Jamie Wallis became the first MP to come out as transgender. But Boris’s joke, which was widely reported – and which he and his advisers knew would be widely reported – revealed a clear strategy. The Tories believe trans rights is an area where Labour are dangerously exposed to public opinion. And with local elections only weeks away they intend to exploit it.

In response, Starmer plans to do what his party always does when confronted with a difficult political issue. Deflect, obfuscate and – when all else fails – stick their heads in the sand and pray it goes away.

The deflection, which he deployed last week, comes straight from Labour’s long-discredited playbook on immigration and race.

‘I do find that too many people retreat into or hold a position which is intolerant of others,’ Starmer claimed. But that’s offensive rubbish, and he knows it’s offensive rubbish. Who are these bigots? The trans lobby’s favourite hate-figure J. K. Rowling? Starmer’s own backbenchers?

Some of those most outspoken at the failure to confront the intellectual and moral inconsistencies at the heart of the trans debate are people who have spent their lives aligning themselves with the same progressive, liberal causes Sir Keir holds so dear. Is he seriously going to try to frame them as the rightful heirs of Nick Griffin and his BNP knuckle-draggers?

I suspect even Starmer recognises that represents a deflection too far. Which is why he’s started to embrace obfuscation.

Over the past few days, Sir Keir has tentatively begun to talk about his commitment to ‘safe spaces for women’. But when pressed on what this means in practice, the former barrister becomes mysteriously coy.

Which represents something of a departure for a Labour leader.

Over the past three decades his party has been in the vanguard of pressing for reserved and protected spaces for women.

All women shortlists. Single-sex wards. Expansion of accommodation and support facilities for the victims of domestic and other violent abuse.

Against that backdrop, platitudes about supporting safe spaces in principle are as cowardly as they are meaningless.

What Starmer needs to explain – clearly and unequivocally – is who he believes should actually have access to these secure enclaves. And recognise that if biological men can utilise them, then they’re no longer safe spaces at all.

Again, I suspect he recognises the unsustainability of his position. Hence the attraction of the third approach – outright denial.

When challenged by Nick Ferrari, Starmer attempted to insinuate there was something prurient and superficial about the line of questioning. That the debate on trans rights was too important to be debased with questions relating to anatomy.

But these aren’t superficial questions. It’s difficult to think of a more profound and fundamental issue than how we define a man, or how we define a woman. And the part that more than 200,000 years of human biology plays in that debate can’t just be wished away because it no longer aligns with fashionable North London dinner-party opinion.

For years, self-styled progressives have been haranguing us all with a consistent mantra. From Covid to global warming, they have appealed – no, ordered – every one of us to ‘follow the science’.

As the pandemic raged, Sir Keir demanded that Boris follow the science slavishly. Yet when it comes to the debate about trans rights, we are all suddenly told we are morally obliged to cast the science aside, and become biological flat-earthers.

Starmer and his allies claim his stance is motivated by a defence of the basic rights of what he calls ‘the most marginalised and abused of many, many communities’. But to do so is to superficialise the argument in precisely the way he condemns in others.

However Sir Keir would like to frame it, the reality is the trans debate is not about a fight for rights, but a collision of rights. Which is why his evasion and sophistry simply will not stand.

Yes, Boris and the Conservatives are going to try to exploit the issue for their own narrow political purposes. But that’s because they think they are on the right side of the argument. And they’re correct to think that.

Out in the country, Keir Starmer’s hesitancy and confusion are not shared. The vast majority of people are instinctively compassionate towards those who seek to self-identify. But they are also clear on the right of girls and women to participate freely and fairly in competitive sport. They are clear on a woman’s right to secure changing rooms and other protected spaces. And they are very clear on the basics of human biology.

Similar clarity is now required from the man who aspires to be their Prime Minister. Because he is trying to play politics too. Once again, Starmer is attempting to work the angles – presenting one facade to the more radical elements within his party and movement, while attempting to show a different face to the public.

That won’t wash any more. Sir Keir has to level with people, not least people in the trans community. He needs to be clear that the only moral – and politically sustainable – position is one in which the rights of those who wish to self-identify are protected and guaranteed, so long as they don’t undermine the rights of others.

Where they do, there will have to be a process of give and take on both sides. And that means there will be some areas where the trans community will need to extend the same respect, tolerance and understanding it asks for itself.

Can a woman have a penis? No. And it’s time for Labour’s leader to say so.