Merle Mitchell wakes up every day disappointed to be alive.

"I know I'm here until I die so every morning when I wake up I think, 'damn I've woken up'."

When the 85-year-old resident of a Glen Waverley nursing home in Melbourne was asked about her life in lockdown, Ms Mitchell said she had been stuck in her room non-stop, other than her four physiotherapy sessions.

"Otherwise, from the time I wake up to the time I go to sleep, I'm sitting in my own room in my one chair."

The view? "I can look at a brick wall," she told the Aged Care Royal Commission on Monday.

Ms Mitchell, an activist who previously headed the Australian Council of Social Service, said:"[It] is not to say I'm not being cared for but I am sure if you asked most people here they would all say they would rather be dead, rather than living more, if they're honest". 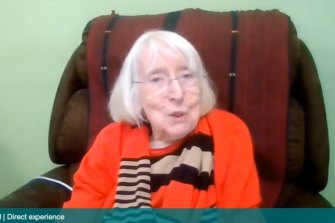 Merle Mitchell is confined to her chair and her room during the lockdown. Waking up every day doesn’t make her happy.

The isolation felt by Ms Mitchell was the "strongest theme" running through the 364 submissions to the commission about the pandemic, said counsel assisting the commission Peter Rozen, QC.

A witness known by the pseudonym, Ms UY, detailed her 82-year old father's rapid decline during the lockdown earlier this year. He became confused and needed a wheelchair.

It was a big change from the outdoorsy man who had virtually dragged his daughter around a nearby park for an hour in March.

"He would stop and look at the trees but he was pulling me along that day, I will never forget it," Ms UY told the Commission.

Limited to hands touching hands through windows, the older man was increasingly "out of it". By June he was dead.

Mr Rozen said the commission was told about spouses and children being "cut off from their partners and parents, unable to support their care in the way they did before the pandemic","

Ms UY said her father, who had motor neurone disease and was unable to speak, had seemed happy before the lockdown, communicating by giving people "a thumbs up and handshake, hugs".

Then suddenly everything changed. It was "windows, windows, and windows", she said, and the only way to see her father was through glass.

"We made it fun. We kept talking, hands, we did a lot of hands … He would follow my hand, so he was matching my hand standing up, sitting down, fingers, thumbs, all that, that kind of thing."

When they finally got to visit him in the garden in May, staff said they were not allowed to hug.

"I couldn't hug, him. He would go to hug me and I would be holding back, and it was unexplainable," said Ms UY.

The lockdown had made staff suspicious of families of residents. 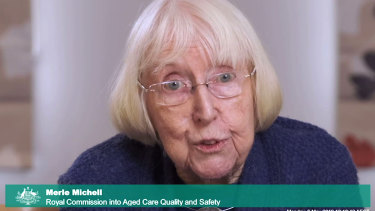 Ms Mitchell said she woke up every day disappointed she was still alive.

"My family were no longer considered to be important and instead the nursing staff and management were the best people to look after dad … Like my family were outsiders."

"I believe that during this time, love was not the biggest priority but enforcing the system was."

Ms UY said most of the carers were beautiful people "genuinely doing their best".

"[But] the nursing home didn't give dad more days. It gave him less days. After what happened to dad, I wouldn't put my mum in there now with the restrictions." she said

The hearings into COVID-19 in residential aged care continue on Tuesday and Wednesday.