One of the nation’s largest employer groups wants the dole cut back to its pre-coronavirus rate except for those who have lost their job in the past 12 months, while asking the government to extend its wage subsidy scheme for businesses grappling with an ongoing hit to revenue.

The Australian Chamber of Commerce and Industry has asked the government to let the JobSeeker rate revert back to the indexed pre-coronavirus level from April, worth $565.70-a-fortnight, or about $40 a day. 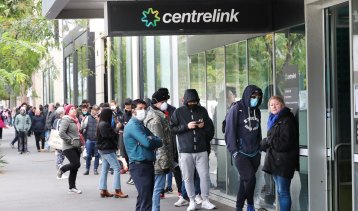 Centrelink queues surged at the height of the virus however the unemployment rate has improved.Credit:Jason South

However, the ACCI’s pre-budget submission has also suggested keeping the current $150-a-fortnight coronavirus supplement for another 12 months for those who lost their jobs after March 2020 when the pandemic forced businesses to shut down across the country to manage the spread of the virus. An alternative proposed by the group is to retain this supplement for the recently unemployed until the jobless rate drops below a certain level and make an extra payment to cover an internet connection to help apply for work.

By the end of 2020 the national unemployment rate had fallen to 6.6 per cent, down from a peak of 7.5 per cent in July on Australian Bureau of Statistics data, but was still up 1.5 percentage points compared to the same time in 2019.

At the height of the outbreak of the virus the federal government introduced a $550-a-fortnight supplement in addition to the standard dole level, effectively doubling the payments, but has since tapered this support down as more Australians returned to the workforce and restrictions eased.

“It is critical to get the balance right between the needs of the unemployed, the fiscal impact on the economy and the appropriate rate that incentivises those who are able, to get a job,” the ACCI submission says. “The current jobs crisis has significantly increased the difficulty in this cohort finding a job, meaning the JobSeeker allowance, and importantly other financial support will be needed, at least for the short to medium term, to support long-term job seekers.”

Social services groups and a large group of economists and academics have backed a permanent increase in the dole for all people who are unable to work, saying the current rate is too cover the essentials.

ACCI has also requested the multibillion-dollar wage subsidy scheme JobKeeper be extended in two-tiers for businesses that were “successful economic contributors and job generators” before the pandemic and continue to be affected by government-imposed restrictions.

However, Prime Minister Scott Morrison on Monday spurned calls for a big stimulus to replace the JobKeeper subsidy after $251 billion worth of federal payments to keep the economy afloat.

“You can’t run the Australian economy on taxpayers’ money forever,” Mr Morrison said at the National Press Club. “The task now is to continue our economic recovery by sticking to our economic recovery plan and exercising the fiscal discipline necessary to ensure that we do not overburden future generations and continue to spend taxpayers’ money wisely.”

A pre-budget submission from the Actuaries Institute has raised concerns about the economic inequality among the generations due to the pandemic, with recent asset price appreciation such as home value increases helping boost the net wealth of older Australians but doing little to help younger workers.

“Increases in unemployment are greatest for younger Australians, and there is past evidence of long-term labour market scarring for those who enter the labour market during a recession,” the Institute says. “This, combined with increased government debt, means that while the direct health impacts of COVID-19 fall more heavily on older Australians, the young shoulder much of the economic burden.”