And the GROOM wore white! Cross-dressing man ties the knot wearing exactly the same wedding dress as his bride – and his daughter was on hand to do his makeup

An unconventional couple said their I dos the groom wearing the same wedding dress as his bride.

Cross-dressing Ian Newman, 53, from East Dulwich, south London, decided to stay true to himself and got hitched in a bridal gown.

And bride Emma Sparre-Newman walked down the aisle and met him at the altar in an identical frock.

Ian opted for the exact same 50s-style strapless gown as Emma, 51, and the pair even went wedding dress shopping together. 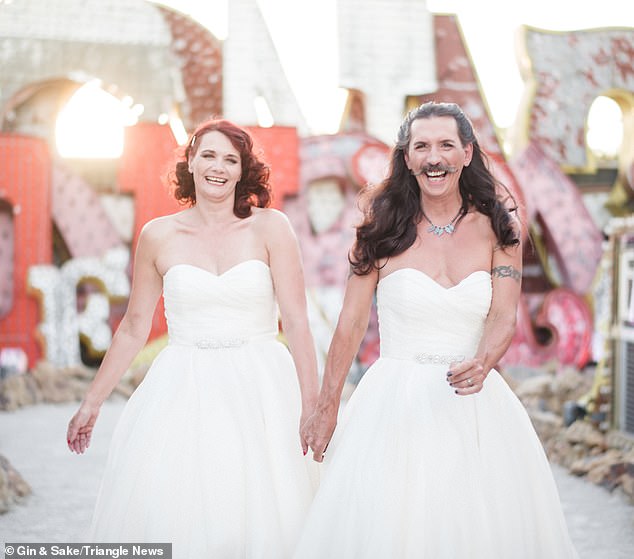 ‘It would actually be odd to see him in jeans and a t-shirt as it’s just not him.

‘So when we discussed marriage, I expected that we would both wear a dress.

‘But we have very different ideas about style so I didn’t imagine we’d ever wear the same outfit.

‘I’m not precious about it, it’s a dress and actually it’s our wedding, it’s not mine.’ 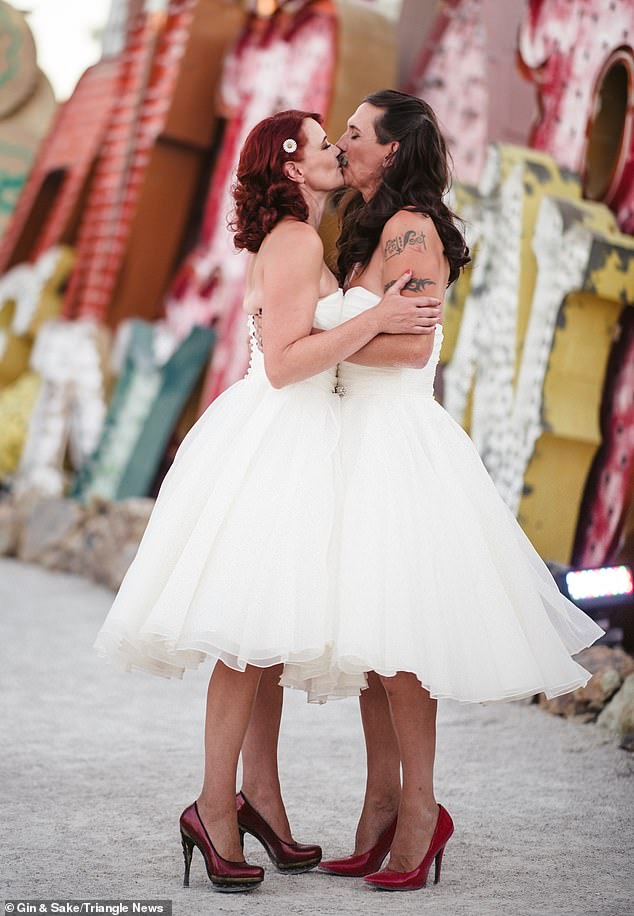 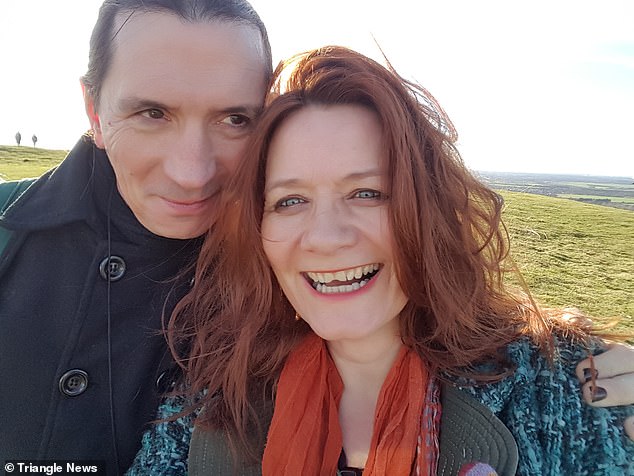 The couple met two years ago at a festival and Ian revealed his love of cross-dressing to Emma on their second date.

He feared that Emma would freak out but when she took it in her stride, he knew she was the one.

The loved-up pair hadn’t planned to get married but the inevitable question came up when they booked a holiday to Las Vegas in January.

They decided to wed while chatting on the phone one evening and family and friends flew out to witness the nuptials. 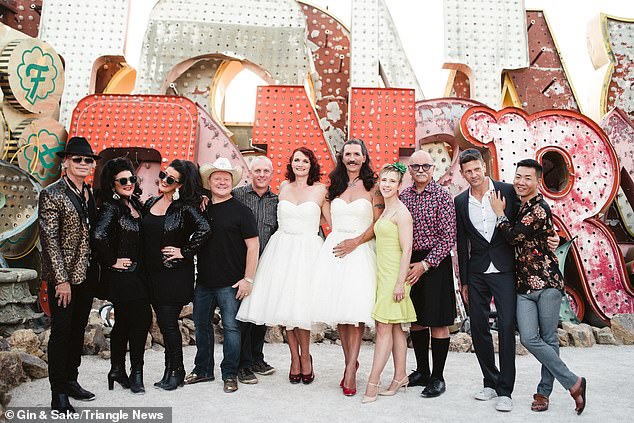 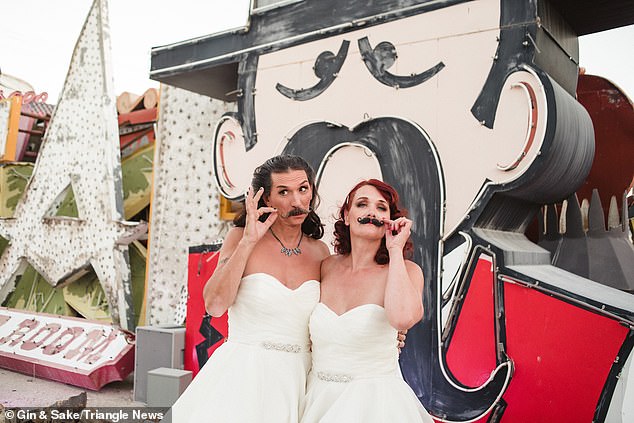 Amongst the crowd of guests was Ian’s daughter Kate, 27, who helped apply her dad’s makeup before the ceremony.

Ian was desperate to wear a new gown on the wedding day so the pair went dress shopping together after checking the store manager was comfortable with a guy trying on gowns.

Emma said: ‘We wanted to keep it very relaxed so I had planned to wear a dress I owned.

‘But my friend was trying to persuade me to go shopping, and when I said no, Ian admitted that he did want a proper wedding dress.

‘Everyone found it hilarious that he was more keen to go dress shopping than I was.’ 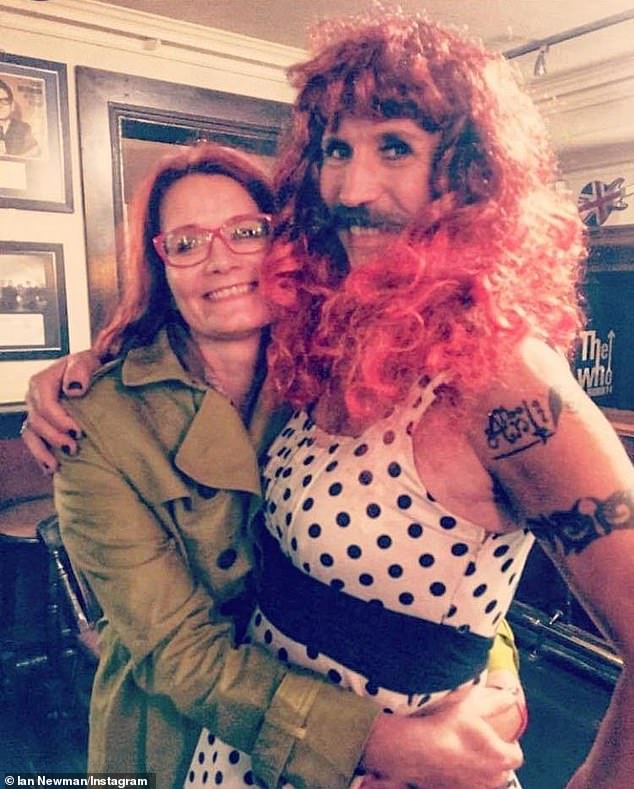 On a day-to-day basis, musician Ian typically wears a black kilt and t-shirt whilst out and about but when at home he almost always wears dresses and high heels 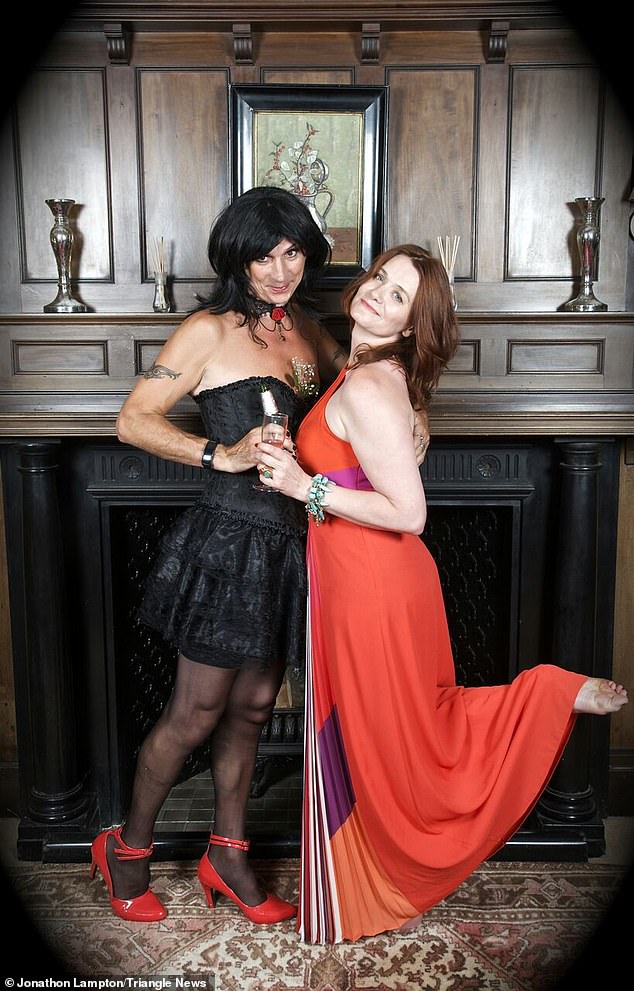 On a day-to-day basis, musician Ian typically wears a black kilt and t-shirt whilst out and about.

But he almost always wears dresses – complete with bust padding – and high heels when at home.

Emma added: ‘I had been very anti-wedding as I didn’t want to stress about what was a very happy experience but trying on dresses was so much fun.

‘It was actually the manager who suggested that Ian should try on the dress that I had already chosen.

‘It didn’t bother me at all and as soon as he tried it on, I knew it was the dress for him, he looked amazing.’

During the fittings, Ian had additional padding added whilst Emma’s waist was taken in but otherwise the dresses are identical.

Emma, who works as a communications manager added: ‘Actually now I’m really glad we did wear the same dress as I think it worked well.

‘Otherwise you might end up comparing who wore the nicest one!’

Ian – who married Emma at Las Vegas’ Neon Graveyard on September 21 – says he had an inkling of his interest when he was a child but it wasn’t until 2011 that he started to cross-dress.

He said: ‘My wedding day was fantastic. I felt utterly wonderful.

‘I imagine as wonderful as any bride does when they get dressed up. You just feel a million dollars.’