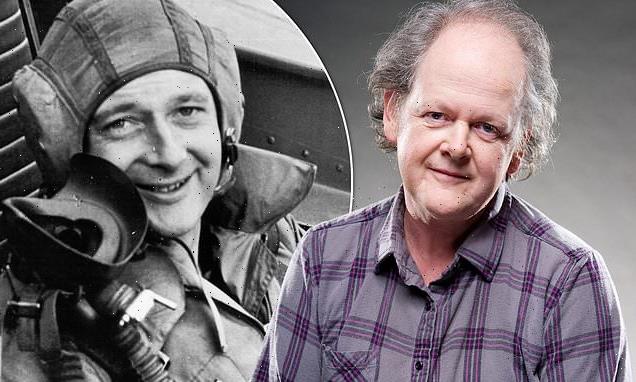 Can we really see into the future? The daredevil who predicted his own death. The woman who dreamed the Aberfan disaster. And the predictions of Nostradamus… Is it all just hokum?

The Premonitions Bureau: A True Story

What’s going to happen next? This is the question that powers us through novels and films and, quite often, through life itself.

History throngs with characters who felt they possessed the uncanny ability to see into the future. 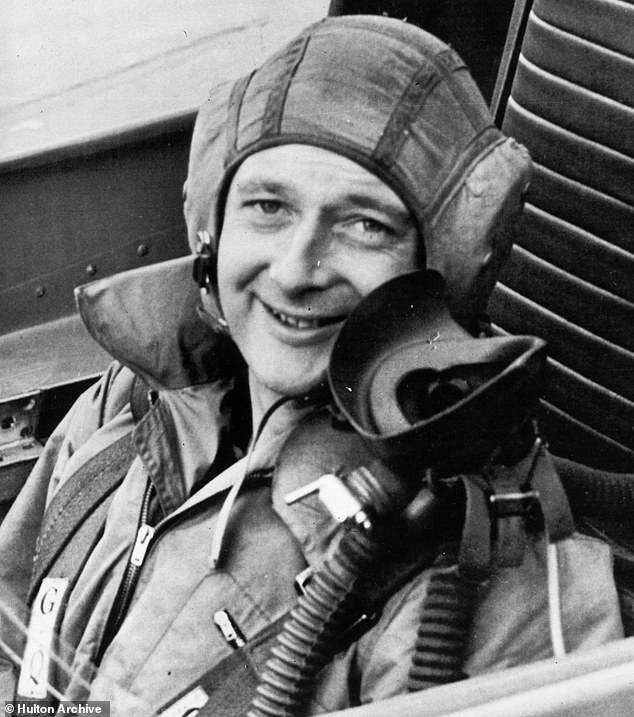 At the same minute The Evening Standard announced the Premonitions Bureau, daredevil hero Donald Campbell (above) set off to beat the water speed record on Lake Coniston

The 16th Century French astrologer Nostradamus is the most famous, or notorious, depending on whether you see him as an all-seeing sage or a scattergun fraud.

But today we are just as eager to trust those who predict the future: radio and television current affairs programmes are fuller than ever of pundits saying what will happen this week, next week, some time, never.

At the tail end of 1966, spurred on by their belief that a handful of people had experienced premonitions of the terrible Aberfan disaster, a psychiatrist called Dr John Barker and a journalist, Peter Fairley, set up The Premonitions Bureau.

This was a lofty title for the cluttered corner of a London newspaper office, overseen by a single secretary. 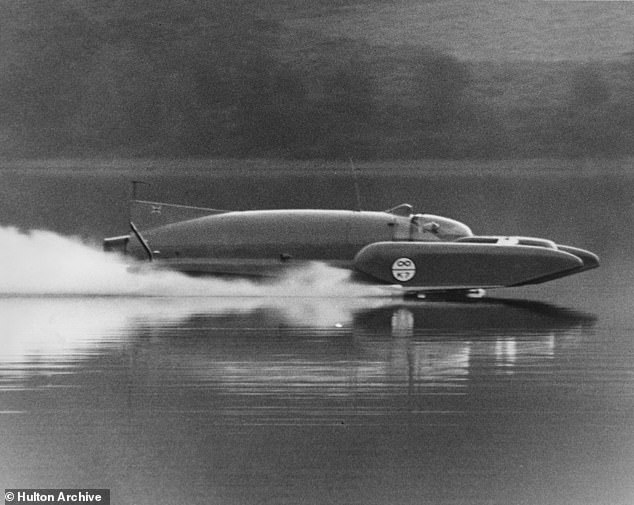 Psychiatrist Dr John Barker and journalist Peter Fairley set up the Bureau for people to send in dreams or forebodings they had about future events. Above: Campbell’s record attempt

Barker and Fairley called on readers of the Evening Standard to send in any dreams or forebodings they had about future events.

After a year, once the future had become the past, these predictions would be compared to what had actually happened, so that their accuracy could be properly assessed.

Barker and Fairley were both convinced that they were onto something. Recent examples of a psychic nature made them think that certain people had an uncanny power to foretell the future.

A North London piano teacher, Lorna Middleton, had woken up ‘choking and gasping and with the sense of the walls caving in’. 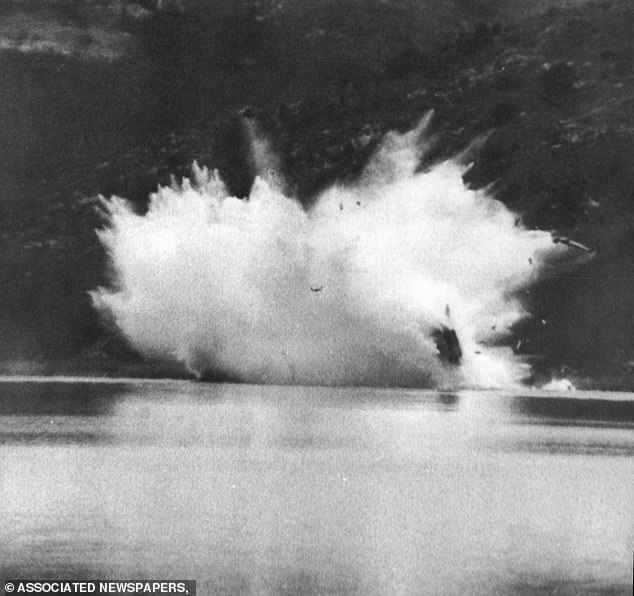 At 328mph, Campbell’s jet-engined hydroplane, Bluebird (above), bounced off a wave, somersaulted high in the air and killed him

Later that day, 144 people, 116 of them children, were killed by an enormous slide of coal waste in the Welsh mining village of Aberfan.

Seventy-five other people reported similar premonitions of the tragedy. Of these, there was evidence that 22 had reported their peculiar feelings to others before, rather than after, the disaster occurred.

The Evening Standard announced the launch of the Premonitions Bureau of January 4, 1967, which went to the presses for its first edition at 8.50am.

At that very same minute, the daredevil hero Donald Campbell set off on his second attempt of the day to beat the water speed record on Lake Coniston. 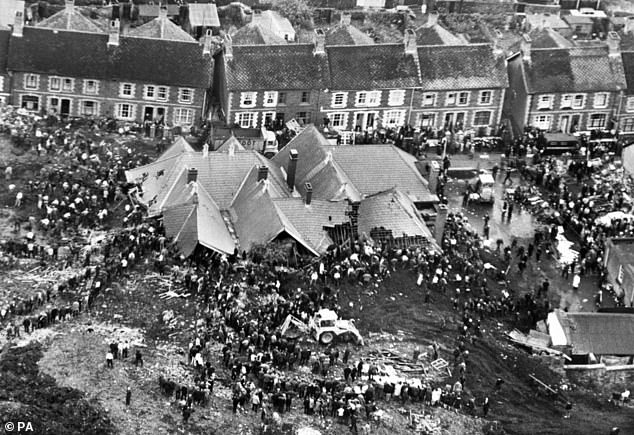 A North London piano teacher, Lorna Middleton, woke up ‘choking and gasping and with the sense of the walls caving in’ on the day of the Aberfan disaster (above)

At 328mph, his jet-engined hydroplane, Bluebird, bounced off a wave, somersaulted high in the air and killed him.

The night before his fatal attempt, Campbell was playing a game of patience and had dealt himself the ace of spades, followed by the queen. He told a reporter that Mary Queen of Scots had drawn the same cards before her beheading.

‘I have the most awful premonition I’m going to get the chop this time,’ he said.

The Premonitions Bureau is full of spooky stories such as this. Two among the many who wrote to the bureau with their premonitions turned out to be much more on-target than the rest.

In March 1967, the piano teacher, Miss Middleton, notified them that she had dreamed of her dead father taking a phone call warning of danger at sea. A few days later, an oil tanker, the Torrey Canyon ran aground, causing Britain’s worst oil spill.

In April she warned of a tornado or hurricane on the west coast of America, and 11 days later, a tornado killed 33 people in Oak Lawn, a suburb of Chicago.

‘This has certainly been a prophecy fulfilled,’ wrote Dr Barker, with more than a hint of triumph. But was it really?

Oak Lawn is nearly 2,000 miles from the western seaboard of America and, all in all, tornados are fairly commonplace: more than 1,200 a year in America alone.

The following year, Miss Middleton grew convinced that Senator Robert Kennedy would be assassinated, warning the Premonitions Bureau on three separate occasions in March, and again throughout April.

On June 4 she called the bureau three times, warning that the killing was imminent. Shortly after midnight, Kennedy was shot dead, minutes after declaring victory in the California presidential primary.

Dr Barker described it as her best prediction yet. But, as predictions go, was it really all that hard? Martin Luther King had been assassinated two months earlier.

‘My God, it might have been me,’ was Kennedy’s reaction. He himself had received countless death threats. ‘I am pretty sure there will be an attempt on my life sooner or later,’ he had told his future biographer.

Barker’s other model clairvoyant was Alan Hencher, a telephone switchboard operator who suffered a head injury at the age of 26 and, on regaining consciousness after four days, discovered he could see into the future.

Over the course of 15 months he had apparently predicted two air crashes and a railway crash at Hither Green station, eight miles from Charing Cross.

At the time of the crash, Hencher complained of a severe headache and was taken to the sick bay. An hour later – before the news had broken – he wrote a note saying he thought there had been a railway accident about an hour previously.

How much of this does Sam Knight, the author of this wonderfully sharp and lively book, go along with?

Most of the time he keeps his cards pretty close to his chest, preferring to revel in the eccentricities of the main characters rather than issue judgments on their integrity.

Sometimes, though, he parades chance happenings as if they were eerie premonitions.

For instance, he reveals that one of the passengers on the train that crashed at Hither Green, killing 49 people, was none other than the 17-year-old Robin Gibb of The Bee Gees.

This is quite interesting in itself, but then he can’t resist adding that, six months before, The Bee Gees had released their first US hit, New York Mining Disaster 1941, which begins with the words ‘In the event of something happening to me…’

Isn’t this straining coincidence to breaking point – particularly as Gibb was not even among those injured?

Nonetheless, The Premonitions Bureau raises fascinating questions about the human need to predict and to seek out patterns and connections.

In order to assess risk, Knight writes, human beings must always think ahead, to what may or may not happen. Without some capacity for prediction, we are doomed.

Those who, for whatever reason, damage the frontal lobes of their brains, where our predictive skills are stored, become blind to the possible consequences of their actions.

‘They ask intimate questions of strangers. They strip off all their clothes because they are hot. They insult their bosses in meetings. They spend money like there is no tomorrow because they have become unshored from tomorrow.’

Small wonder, then, that our capacity for prediction can sometimes burst through its logical constraints to enter the realm of fantasy.

After 15 months, the Premonitions Bureau had received 723 first predictions from the general public, but only three per cent of them had come to pass.

However, this poor result did little to curb its supporters, who came up with ingenious arguments in defence of its 97 per cent duff predictions.

‘So little is known of the role of time in this phenomenon that it is impossible to say they will never come true,’ said Fairley.

There was, though, one prediction that certainly did come true.

Both Alan Hencher and Lorna Middleton repeatedly warned Dr Barker of premonitions they had had that his life was in danger. In August 1968, a vessel burst in his brain, and he died, at the age of 44.