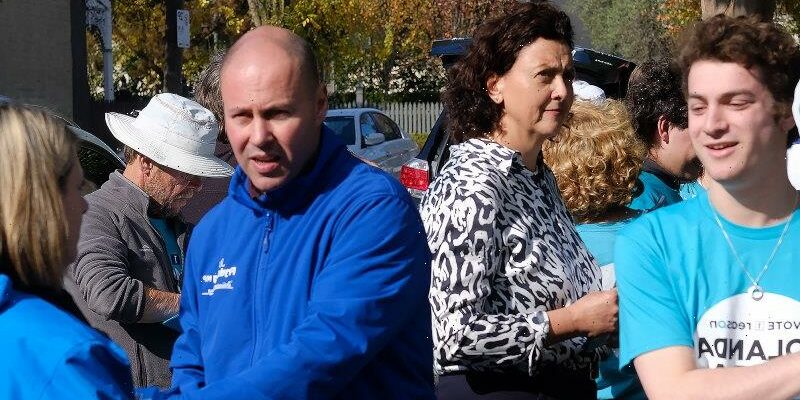 For months, Treasurer Josh Frydenberg and Monique Ryan, his independent opponent in the seat of Kooyong, have been hearing each other’s pitches through the media. From now until election day, they will be doing so within earshot of each other.

The pair spent Monday handing out how-to-vote cards side-by-side in a prime location at the entrance to voting booths in a suburban street in Hawthorn. 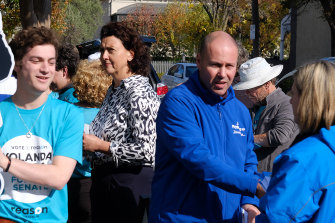 Asked how it felt to stand alongside Frydenberg, who was insulted last week when Ryan labelled him the “Treasurer for NSW” and who she accused of misquoting her mother-in-law, Ryan said: “We’ve been very cordial.”

Boroondara Council told candidates on the weekend that signs and banners would not be permitted at the early voting centre and each candidate would be allowed just two volunteers.

Ryan’s campaign considered legal action to fight these rulings and a compromise was reached on the volunteer cap, but the signage ruling remained.

On Monday morning it was clear candidates did not intend to follow any of the rules, which Ryan said were “confusing” and at odds with those set by other councils.

Close to 100 volunteers lined the footpaths of Guest Street near Glenferrie Road, a stone’s throw from the candidates’ campaign headquarters.

Both Ryan and Frydenberg said they were pleased with the reception they received. The incumbent, in a blue Liberal Party jacket, said he was “very encouraged” by the mood.

Ryan said she expected to encounter more Coalition supporters because pre-polling tended to attract a greater proportion of older voters who might be more conservative on average. “There’s a real mood for change, a thirst for change,” she said.

Ryan said Sunday’s leaders’ debate was a good advertisement for the teal independents because “we’re not going to behave like that”, despite a series of barbs towards Frydenberg in a Sky News debate last week.

“I’m not going to behave that way towards Mr Frydenberg. I’ll behave in a respectful, collegial way and I’d hope to receive the same thing – which is what I have received today,” she said.

“It was very civil, very fun. The family is strong and happy,” the young Baillieu said.

A Frydenberg-themed van was parked near the voting centre and a long Liberal banner was erected near the main street. Dozens of Liberal members turned up, but they were probably outnumbered by those in teal T-shirts.

Rob Baillieu, who is the manager of Ryan’s volunteer team, said 50 Kooyong residents had signed up to help the “Voices of” campaign on Sunday. Another 50 joined on Monday morning, he said.

The group’s 1800-strong volunteer team has knocked on the doors of 97 per cent of houses in Kooyong, Rob Baillieu claimed.

“It’s the largest campaign in Australian electoral history,” he said.