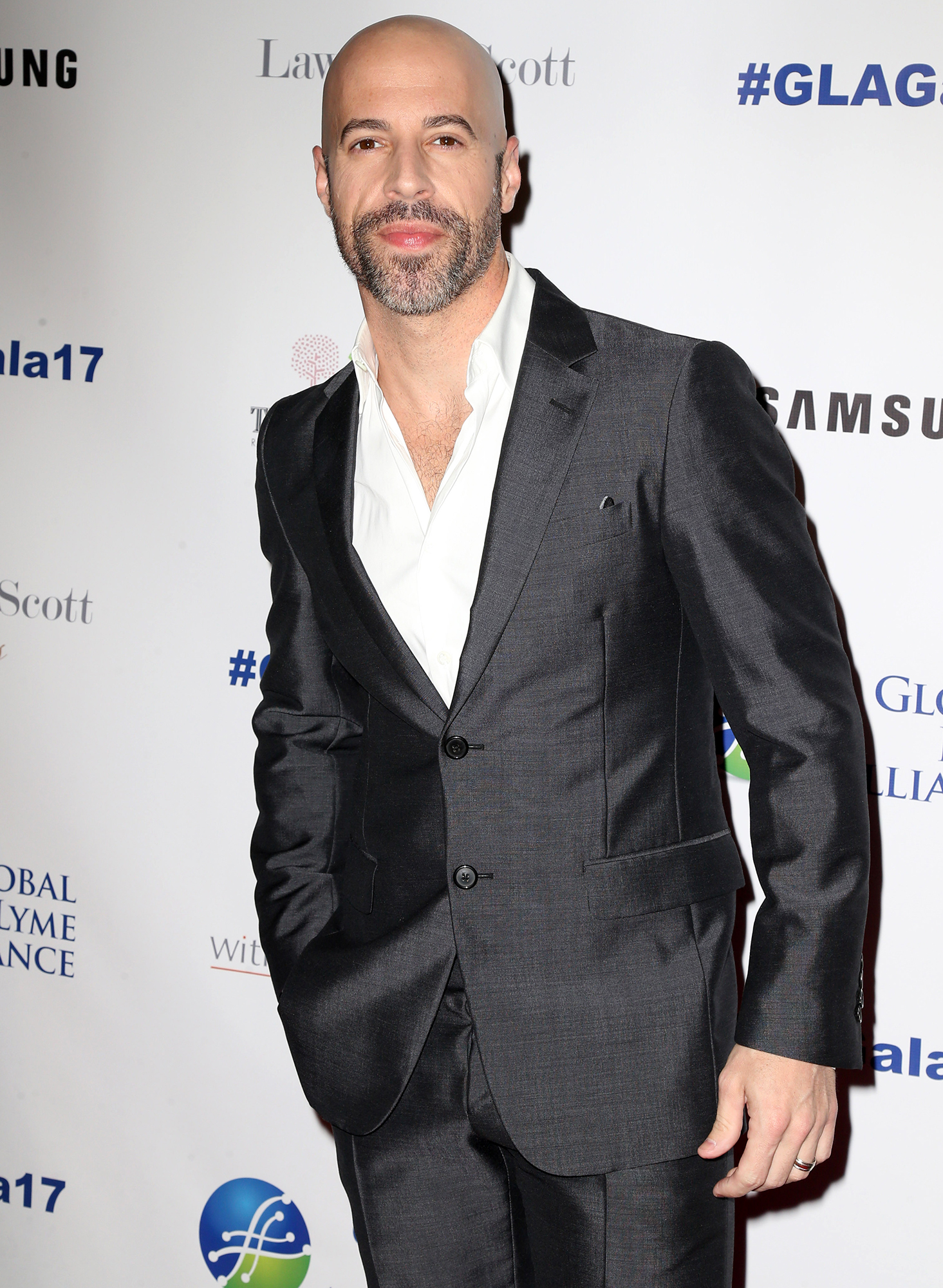 Grieving a heartbreaking loss. Chris Daughtry‘s band Daughtry has canceled their forthcoming performances after the death of his stepdaughter, Hannah. She was 25.

“Due to the unexpected death of Chris and Deanna Daughtry’s daughter, Hannah, all currently scheduled shows for the coming week for Daughtry have been postponed,” a Friday, November 12, statement on the band’s official Instagram page read. “The Daughtry family thanks you for your understanding and respectfully asks for privacy during this very difficult time.”

The post continued, “Further details will be made available at a later date. The investigation into this tragic death is still ongoing.”

The American Idol alum, 41, postponed his Friday show in Atlantic City, New Jersey, and flew home to Nashville after learning that Hannah was found dead in her home, according to reports.

‘American Idol’ Winners: Where Are They Now?

Deanna Daughtry, who wed the “It’s Not Over” musician in November 2000, opened up about her heartbreaking loss in an emotional Instagram post on Saturday, November 13.

“My first born. I love you endlessly Hannah,” the massage therapist, 47, captioned a gallery of family photos. “Our family would like to thank you all for the outpouring of love as we grieve the loss of my daughter Hannah. We are awaiting the autopsy results to determine how Hannah sustained the injuries that caused her death. Our hearts are broken.” 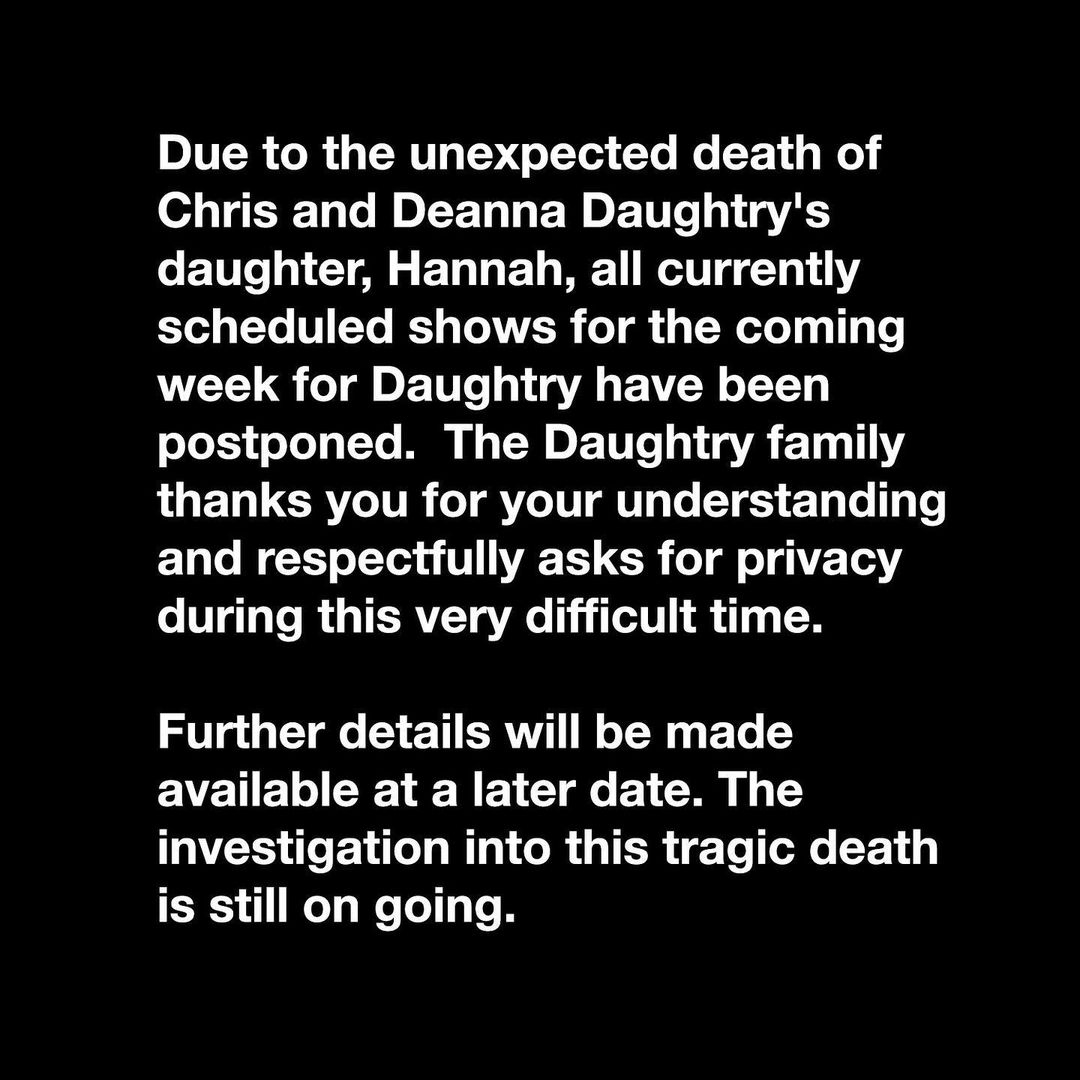 Deanna welcomed daughter Hannah and son Griffin, 23, with a past partner before she met the “Heavy Is the Crown” crooner. Following their 2000 nuptials, the couple — who celebrated their 21st wedding anniversary earlier this month — later welcomed twins Adalyn and Noah, now 10.

The Grammy nominee previously announced in July 2010 that he and Deanna were expecting twins via surrogate.

“Big news — Deanna and I are havin’ a boy and a girl,” the rocker announced via video blog on the band’s website at the time. “We’re very excited about that. We do have names picked out but we’re going to keep them to ourselves until further notice.”

The post noted, ”Due to Deanna’s partial hysterectomy in 2006, the couple used IVF and had their embryos transferred to a gestational surrogate.”

Since growing their family, Chris has continued gushing about fatherhood, which even inspired several of his musical tracks, including “I’ll Fight” and “Waiting for Superman.”

“I think every dad probably feels this way about their kids: No matter how old they get or how young they are, you’re always going to be there to fight for them, and you’re always going to be there to pick them up when they fall down,” he told Rolling Stone in November 2013. “‘Waiting For Superman’ is not necessarily about a superhero, but it’s definitely using that archetype as a metaphor for waiting for that person to be what you need them to be — you know, to step up and be that strength. My wife and my daughter were certainly my muses for the lyrical content of that song.”

Chris’ self-titled band released their sixth album, Dearly Beloved, in September and kicked off their Dearly Beloved Tour earlier this month ahead of the postponement news.