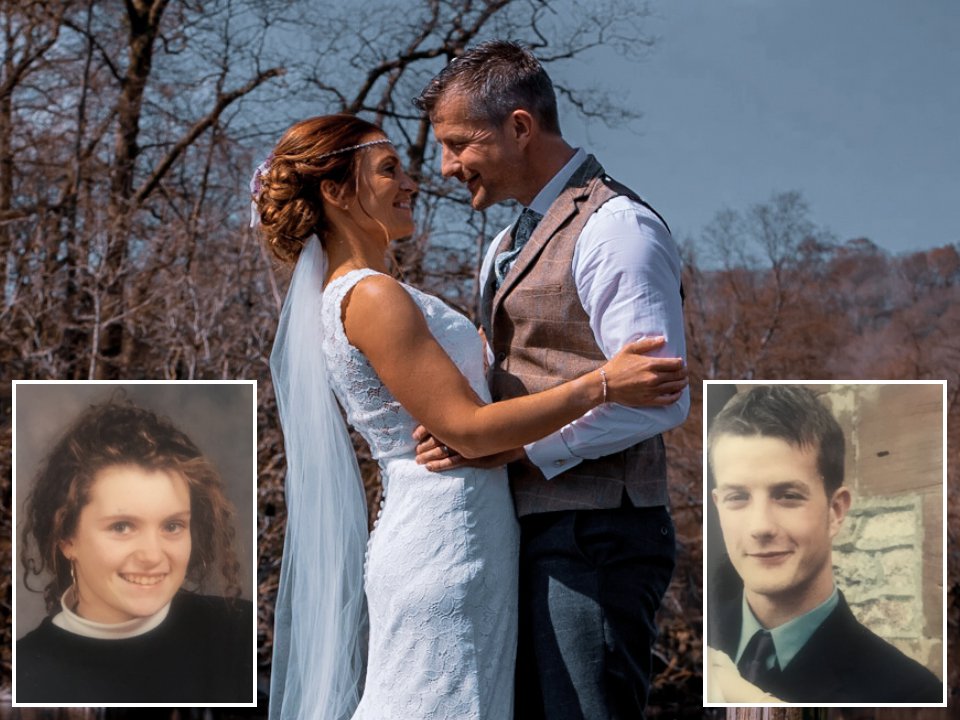 Helen Marshall, 41, and Graeme Richardson, 42, first met when they were in school and admired each other from afar in the halls before they dated and fell in love as teens.

When Graeme proposed after nine months together, their parents worried they were far too young.

After he, a year older, went off to college and following a family bust up, the couple drifted apart, with their letters to each other getting lost – just like in The Notebook.

Helen and Graeme went on to have kids with other long-term partners, and later made do with catching glimpses of each other on the school run.

But after both their respective relationships fell apart, Helen reached out to Graeme and, 20 years later, they fell in love all over again.

Now, the pair have tied the knot – after Graeme proposes with the same ring he used to pop the question when they were 15.

Helen from Wasdale, Cumbria, said: ‘We just feel so content now. We live in the family farm he lived in when we were growing up.

Graeme said: ‘Helen’s the other half of me. She’s the opposite to me; the extravert to my introvert.

‘It just feels like the right ending. I only ever thought I’d marry Helen

‘I never thought I’d wear a ring but as soon as it went on I knew i would never take it off.

‘It wasn’t just puppy love like everyone said it was. Now that we’re married all the difficulty and sorrow has disappeared.

‘My friends have never known me as the happy and content man I am now.

‘They are all amazed.’

Back in school, neither Graeme nor Helen had the courage to ask the other out, until one day a friend of Helen’s offered her a chocolate bar in return for asking Graeme on a date.

After that, the rest was history.

Their love grew as they walked by the stunning waters of the Lake District, and the couple knew they wanted to get married even at their young age.

Graeme worked hard at weekends for £3 an hour to buy Helen a diamond engagement ring.

He said: ‘I’d seen it in the shop window of Goldsmiths in Penrith and I knew I wanted to buy it for Helen.

‘I worked really hard to save up for it. It was a substantial amount of money, but I can’t remember exactly how much now.

‘My friend thought I was crackers. He had some choice words when he saw me spending that much on a ring, but it was for Helen.

‘I was really blown away when she asked me out. There was just something about her, and I knew then that I’d never forget her.’

He tried to keep in touch with Helen by walking the 30-minute round trip to the phone box, but Helen was often out or doing homework when he called.

Meanwhile Helen tried to write him letters, but they never arrived.

That, coupled with the family who thought they were far too young to marry, caused them to drift apart.

But Helen kept the ring, and continued to wear it for years before tucking it safely away in a jewellery box.

She said: ‘We were together nine months and we knew we wanted to be married.

‘He bought me the engagement ring and I kept it all these years.

‘I bought him one, but it disappeared with my letters.’

Meanwhile, Graeme, a stone mason, had two children, aged 19 and 15, with his partner of 17 years.

Both chose to raise their kids in their hometown, and were able to catch glimpses of each other at events at their kids’ school.

During this time, they’d both go separately to a bench by a boat house that used to be their special place when they were teens, each reflecting on their lost relationship and harbouring a secret hope that their old love would appear while they sat there.

‘We lived three miles from each other,’ said Helen.

‘I went away for a few years, but no more than five. We used to see each other at our children’s school.

‘We couldn’t talk to each other or make eye contact. It was awful, and we were both so sad.

‘He said he used to slow down every time he drove past me, and watch my hair bouncing as I walked along.’

Eventually, she reached out to him on Facebook, at first just hoping for friendship.

They met up for walks until one day they had their second first kiss.

Those romantic walks became more frequent, and neither can pinpoint exactly when their rekindled friendship turned into something more, but both of them say it felt like a perfect fit.

Graeme said: ‘I was so excited when Helen messaged me.

‘When we first kissed again I just wanted to rush back in to it. It was like picking up my favourite trowel – and that’s a massive compliment coming from me.

‘I just feel so proud to have her. Like I’ve really achieved something big.’

The second time Graeme proposed to her, he did it by writing in the sand during a holiday in Croatia.

‘It was such a beautiful moment,’ Helen said.

The couple eloped, only telling close family the day before they wed on April 17, with the only guests being Helen’s parents Marilyn, 68, and Clark, 66.

They celebrated afterwards with burgers and champagne.

Helen said: ‘I feel like the luckiest woman alive. We could hardly speak it was so emotional.

‘It was so romantic. When I look at the pictures it just fills me with sheer contentment that I have got the man that I’ve loved since I was 15.

‘I feel like the luckiest woman alive, I really do.

‘I told my two older girls the day before, and he told his two children, but otherwise only my parents knew.

‘He said he finally feels happy and content in himself.

‘All he ever wanted was to be happy with me.

‘We’ve had a hard life, and we just feel so happy and content.’