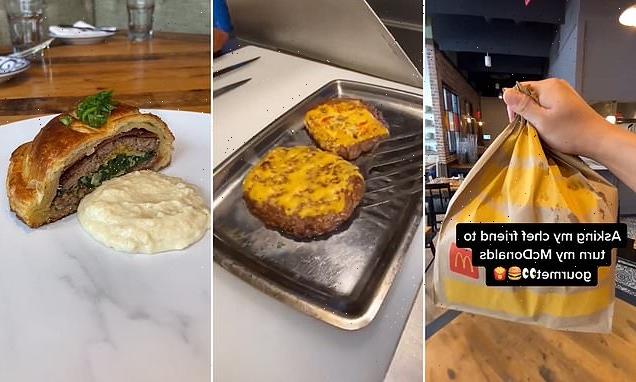 A food blogger has revealed how to transform fast food into gourmet meals – including making a McDonald’s burger into a beef wellington and a Taco Bell into a Scotch Egg.

Danny Kim, from Washington D.C., who posts food videos under Eat the Capital on TikTok on YouTube, has shared a series of clips visiting top chefs to see how they transform heavily processed fast food into something worthy of being served at a Michelin star restaurants.

In one clip, a chef friend of Danny’s added a puff pastry to a McDonald’s burger and blended fries to make a pomme puree and beef wellington, while in another he made a crispy chicken caviar crème fraîche amuse-bouche using KFC tenders.

In one clip, Danny took his McDonald’s to an unnamed chef friends who explains: ‘ We’re going to make a pomme puree’.

Pulling Big Mac apart he explained: ‘I’m going to save these onions and these pickles.

‘I’m going to sear the burgers in some  olive oil, while my pan is eating’.

He then added the fries to a blender and explained: ‘I’m going to add a little bit of milk and cream, garlic, and bay leaves’.

Next, the chef separated the burgers and threw away the buns before starting to build the beef wellington.

‘First things first, I’m going to take the spinach here, and that’s just going to help loosen the burgers, I’m going to put this in between the two,’ he explained. 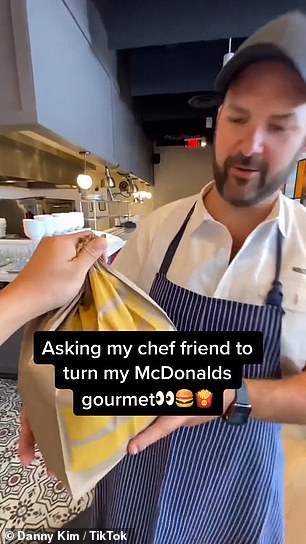 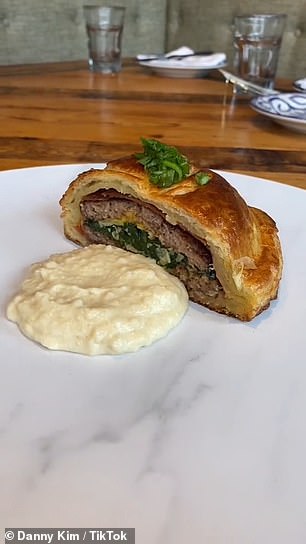 Danny Kim, from Washington D.C., who posts food videos under Eat the Capital on TikTok on YouTube, has shared a series of clips visiting top chefs to see how they transform heavily processed fast food into something worthy of being served at a Michelin star restaurants. 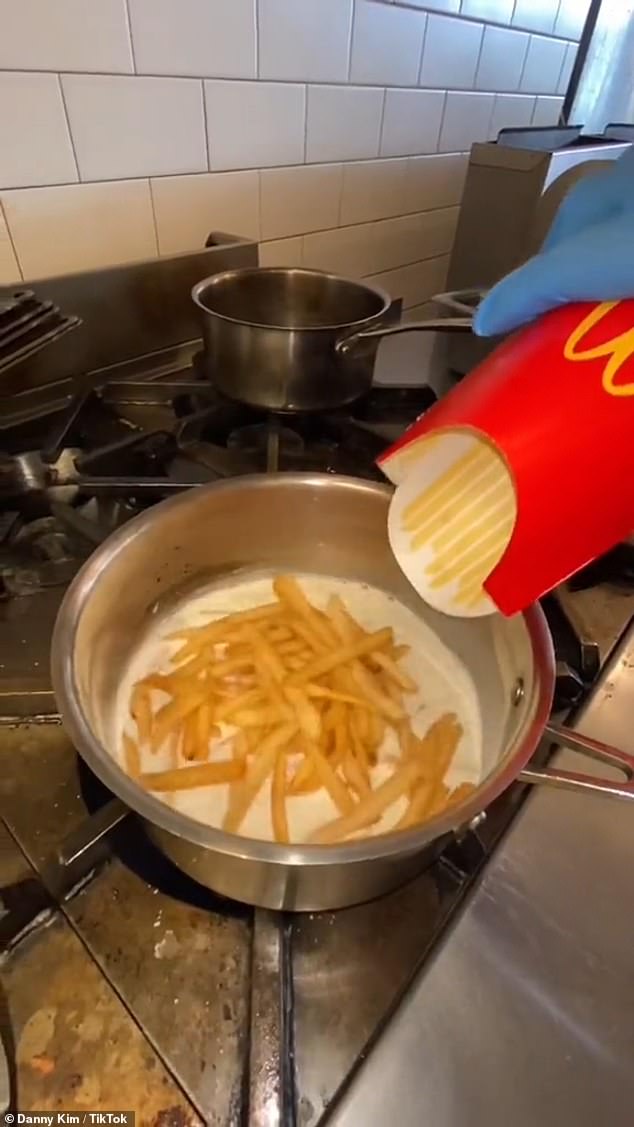 He put the burgers cheese side down to touch the spinach before wrapping it in puff pastry.

While the beef wellington was cooking he prepared a gravy to serve at the table using the onion and pickles taken from the burger.

‘We’re gonna wait for this to boil, and we’re going to take the time, it’s going to be really nice presentation,’ he  said.

Taking it to the table he went on: ‘These mashed potatoes are looking good. 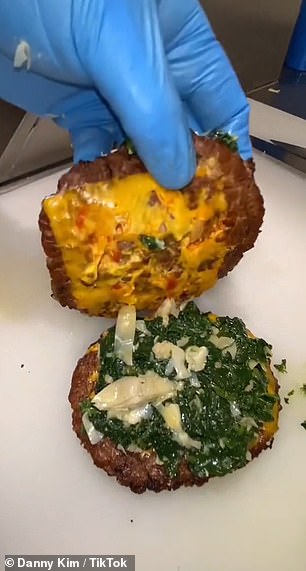 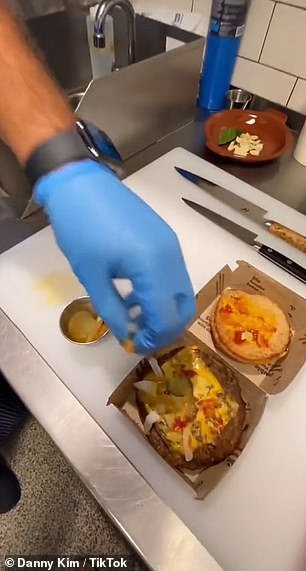 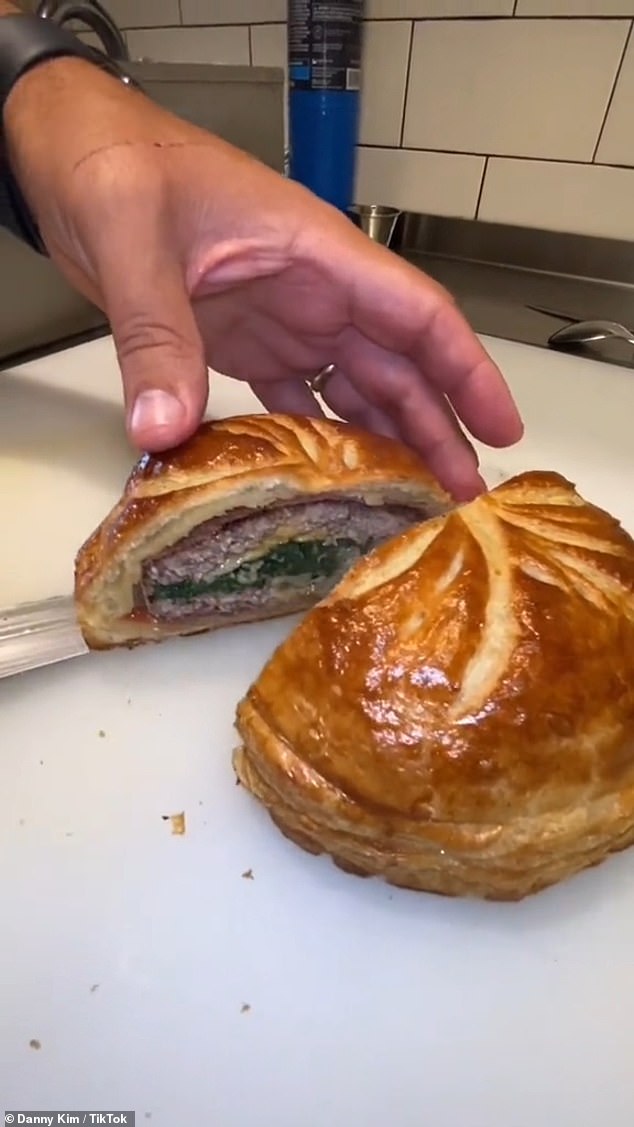 After letting it sear, Danny’s chef friend showed the cut of meat after it was made into a beef wellington

Discussing the beef wellington he went on: ‘The two patties are sealed and kind of hold everything better than the spinach and artichokes.

‘And I’m going to finish this dish table side for you, as in true fine dining’ he adds before pouring a glass of wine to serve with it.

Clearly talented with all kinds of fast food, in another clip he made a crispy chicken and caviar crème fraîche bite.

First he sliced the chicken into three parts using it as a base for his dish.

Next, the chef added smoked trout roe to the dish before topping it with dill and sprinkling on olive oil.

In other clips Danny showed how chefs can make KFC into pasta, as well another making a Scotch egg from a Taco Bell