“They are scared by a confident woman.”

Charli D’Amelio is addressing the haters who have criticized how her “look” has changed over the past few months.

On the latest episode of her and sister Dixie’s podcast, “Charli and Dixie: Two Chix,” Charli, 16, hit back at the critics who say she “used to look prettier,” telling the haters that “they are scared by a confident woman.” 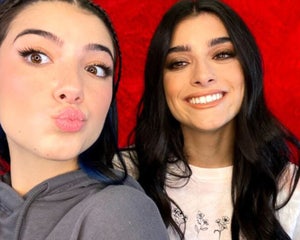 Charli’s older sister and fellow TikTok star Dixie brought up the topic by noting that Charli looked “so different” at the beginning of coronavirus quarantine.

“I saw this video of you from the first week of quarantine, and you look so different,” said Dixie, 19. “Not in a bad way, you look good now. You had eyelashes and you were really tan.”

“What I’m going to say is the fact that everyone says, ‘I used to look prettier.’ Like what do you want me to do?” Charli asked in reply.

Although Dixie told her sister that “everyone has glowed down,” a frustrated Charli said the trolls aren’t only comparing her look to what it was at the start of lockdown, but even farther into the past.

“What do you want me to do? Like I can’t…but they say in the beginning, beginning,” Charli explained to Dixie, who replied, “I feel you don’t like how you looked then.”

Charli, who has over 99 million followers on TikTok, then talked about her own relationship to her appearance.

“I hate how I look now, because now I wanna look how I did then,” she said, before asking, “But then, when I looked like that, I didn’t like it, so what do you want me to do? Just be sad?”

Dixie suggested that the criticism began after Charli cut her hair back in February.

“I don’t know how a four-inch haircut changed you so much,” she wondered, to which Charli replied, “Because it gave me confidence, and they liked when I was fragile.”

While Dixie laughed at her younger sister’s comment, Charli continued, saying matter-of-factly, “It’s true. They are scared by a confident woman.”