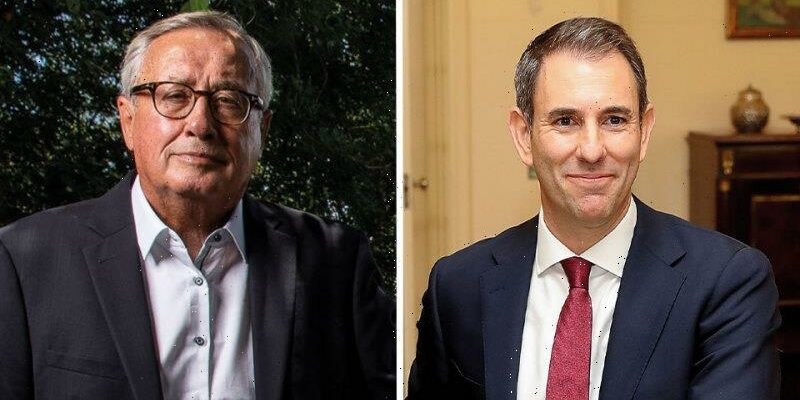 Jim Chalmers already knows his way around the treasurer’s office in Parliament House.

For more than five years, he worked in the office of then-treasurer Wayne Swan, who had to deal with the fallout from the 2008 global financial crisis. 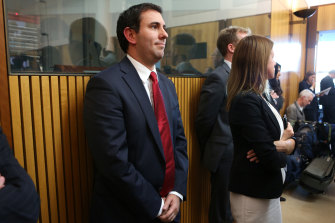 A young Jim Chalmers watches on as Wayne Swan delivers the 2012 budget. The first issue for the Rudd government was inflation and cost of living.Credit:Penny Bradfield

While the budget deficits and the huge increase in government spending used during that era to stave off a recession are what dominate the memories of that period today, forgotten is the early part of Swan’s turn as treasurer.

When Labor’s Kevin Rudd swept to office in November 2007, inflation was accelerating and on its way to 5 per cent.

His predecessor’s final mid-year budget update had revealed an extra $59 billion in revenue courtesy of the pre-GFC mining boom and a strong economy. But rather than save it, John Howard promised more than $46 billion in tax cuts, handouts and spending in the election lead-up.

The Reserve Bank, partly in response to the largesse, had pushed up interest rates just a fortnight out from polling day (and would lift them twice more to 7.25 per cent).

The new treasurer and his staff including Chalmers, along with then-finance minister Lindsay Tanner, spent much of their early months going over the budget looking for spending cuts and ways to bring inflation to heel while also honouring election promises.

Fifteen years on, Chalmers is going back to the treasurer’s office as the boss. And the issues of government spending, inflation and cost of living are back on the agenda.

Chalmers admits he feels the pressure of being the person in charge of the nation’s finances and, to a large degree, the government’s electoral fortunes over the coming three years.

An election dominated by low wages growth, the cost of living and inflation, revealed to be at a 22-year high midway through the campaign, means history is repeating itself.

Chalmers says all those issues are front of mind.

“I think the combination of inflation and wages growth is really the defining challenge that we are inheriting,” he says. “I think the international outlook will obviously be a major issue.”

“At the centre of the election campaign was cost of living. People felt that no matter how hard they worked, they felt they were falling behind.”

While there is a similarity between the inflation and cost-of-living pressures facing Chalmers and those Swan and Rudd confronted in 2007, there is also one substantial difference – the state of the budget. 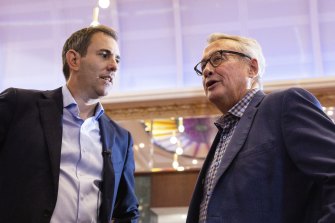 Wayne Swan, who Chalmers worked for between 2007 and 2013, was one of the first former treasurers to congratulate him.Credit:Alex Ellinghausen

A deficit forecast to be $80 billion this financial year after $220 billion of deficits in the two years before that. Treasury is expecting deficits for the rest of the decade, which means debt north of $1 trillion.

It’s obvious the red ink across the budget, and the sheer size of the debt, is already weighing on Chalmers.

“No treasurer has ever come into office and inherited $1 trillion in debt,” he says.

He will rely heavily on Finance Minister Katy Gallagher, with the pair committed to a “line-by-line” appraisal of spending. There are other strong economic forces within the Labor caucus, including Canberra MP Andrew Leigh, who led the charge to expose the volume of JobKeeper cash that flowed to profitable companies.

While the focus is the budget and implementing the agenda the party took to the election, like all former Labor treasurers there is a weight of expectation about broad economic reform. Chalmers knows that all too well.

Chalmer’s 18th birthday fell on 1996’s election day – March 2 – so he pre-enrolled to ensure he could cast a ballot. And there was one reason he did so.

“I didn’t want to miss what would clearly be my only chance to vote for Paul Keating,” he noted in his 2013 book Glory Daze.

Keating, and Swan, were among those first to congratulate Chalmers on Saturday’s victory and his elevation to treasurer.

As any Labor treasurer, shadow treasurer or even Liberal treasurer has conceded, in terms of policy-driven reform of the Australian economy there is only Keating.

Peter Costello made important changes during his long term as treasurer in the Howard government, particularly around repairing the budget, but policy wonks look up to Keating because he – with Bob Hawke – modernised the economy.

What Chalmers does not share with either Keating or Costello is the political certainty those two enjoyed. They had leaders prepared to fight for reform and they both enjoyed a strong majority on the parliamentary floor.

But buried in Labor’s policies is scope for change.

High on the list is a planned employment summit that will bring the government, unions, businesses and non-governmental organisations to the table.

Chalmers says the summit is more than just a look at boosting employment. Issues such as female participation and wages growth have to be part of the agenda.

“The focus of the summit will be broader than just the labour market. It has to be,” he says.

The other area for long-term reform may be in Chalmers’ planned review of the Reserve Bank, which will take in the interaction between fiscal and monetary policy.

It’s been four decades since the RBA has faced an external review.

How the bank’s management of interest rates interacts with budget settings has never been on a government’s agenda, except as parliamentary debating points.

Combined, an overhaul of employment and a fresh approach to fiscal and monetary policy could offer the reform agenda sought by true believers.