This Sunday, the Marvel blockbuster is up for several Academy AWards, including Best Picture, which makes it the first superhero movie to achieve that feat. So while there’s a chance that movie will walk away with some honors, it’s pretty much a guarantee that you’ll get to see the whole cast of Black Panther donning their red carpet best at the awards show on Feb. 24. Of course, star Chadwick Boseman, a.k.a T’Challa, should be at the Oscars — despite getting snubbed in the Lead Actor category. And he probably wont’ be going solo. There’s a lot of evidence out there that Chadwick Boseman isn’t single, so keep an eye out for his rumored girlfriend as well.

Boseman and 27-year-old singer Taylor Simone Ledward made a rare awards show appearance together earlier this year at the 2019 SAG Awards, so it’s likely that they’ll walk the carpet together again on Sunday. The couple’s relationship was made somewhat official — get this — by Ledward’s grandmother in April 2018, when she confirmed the relationship rumors to In Touch. Ledward’s grandmother told In Touch, "She’s very happy, and he is, too." But besides being spotted together at a few basketball games and the SAGs, Boseman and Ledward have otherwise kept their relationship pretty private.

As you can tell from the few snapshots of the two of them on the red carpet in January, though, it seems like they have a pretty good time together. 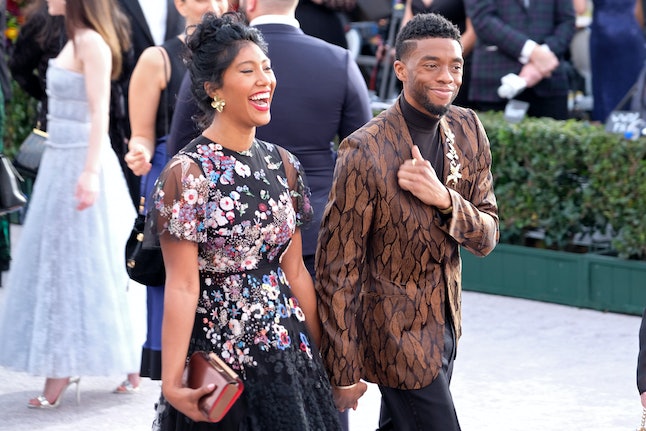 Ledward’s family seems much more willing to publicly comment on the relationship than the couple themselves. A month before Ledward’s grandmother commented on the couple’s status last spring, Ledward’s sister reportedly clapped back to a fan who posted on social media about shipping Boseman with his Black Panther costar, Lupita Nyong’o. BET reported that an account they determined belonged to Ledward’s sister commented on an Instagram, "His real life queen is gorgeous, and together they embody true love." She also added, "Not to mention they would make some beautiful babies!"

While BET and In Touch have reported that Boseman is happily dating Ledward, the star of Black Panther still hasn’t actually responded to the family’s comments or any other speculation. Not much about Ledward herself is publicly known, either, but multiple sites including Oprah Magazine report that she’s a singer. Hopefully Boseman’s fans will get a chance to get to know his leading lady sometime soon, but sharing the specifics of his personal life doesn’t exactly seem to be the actor’s M.O. 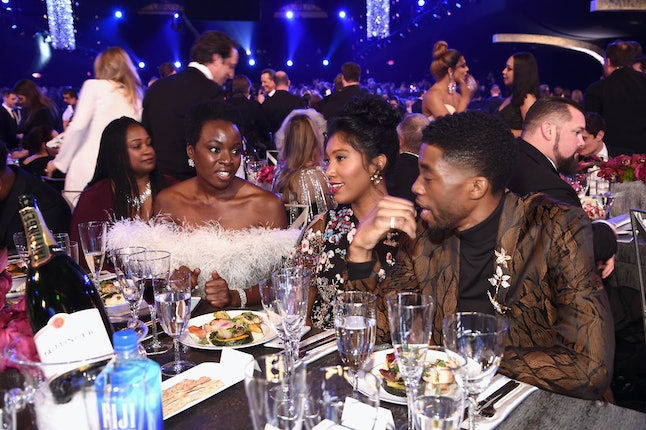 Regardless of whether or not Boseman shows up with Ledward on the red carpet at the Oscars, the Super Bowl of awards shows will surely be a big night for Black Panther fans. Of course, you’ll be sitting on the edge of your seat at the end of the night during the Best Picture announcement, but you’ll also have a chance to see Boseman take the stage earlier in the night as a presenter, Entertainment Tonight reports. And if she’s in the crowd, Ledward will no doubt be cheering him on.