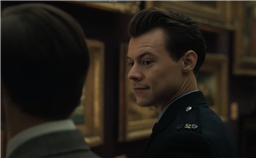 Three movies into his film career, Harry Styles’ ability as an actor continues to improve with each of his outings. Beginning as a young soldier in Christopher Nolan’s “Dunkirk” (2017), he returns to the silver screen with two films this year. In the first, he’s the charming husband to Florence Pugh in “Don’t Worry Darling,” with the press tour that keeps on giving. In the second, he portrays a closeted gay police officer in Michael Grandage’s drama “My Policeman” from Amazon Studios, featuring his strongest turn yet as an actor. But is an Oscar nomination in his future?

Singers-turned-actors have had an inconsistent road to the Academy Awards. While there are successes such as Cher (“Moonstruck”) and Jennifer Hudson (“Dreamgirls”), Academy voters sometimes make actors prove themselves for a while to show they’re the real deal. Known as a “pretty boy,” Styles’ celebrity status does present an obstacle to overcome with awards voters. As Tom, the internalized conflict that Styles conveys is executed effectively, and if he decides to campaign and make a play for his first Oscar nomination, it will have to begin with Amazon choosing to submit him for supporting actor attention – which is not category fraud.

Going between younger and older versions of the three main characters over a 40-year span, the British drama tells the story of Tom (Harry Styles and Linus Roache), Marion (Emma Corrin and Gina McKee) and Patrick (David Dawson and Rupert Everett) and how events from their past affect their future when reunited.

In the same manner of Barry Jenkins’ “Moonlight” (2016), the film features lead characters, not lead actors. The film is evenly divided with the younger and older versions, with no one really dominating with screentime. With an impressive performance from Harry Styles and a best-in-show turn from Emma Corrin, the subtle Amazon Studios drama could look for awards attention, although it will be an uphill battle.

The streamer is going into the season with the international feature contender “Argentina, 1985,” which premiered at Venice and the documentary “Good Night Oppy,” which premiered at Telluride. With smaller movies like “Catherine, Called Birdy” and “Nanny,” Amazon’s chances at Oscar love will need to be focused and robust. With Styles currently on a world tour, how much time can or will he devote to promoting the film to voters?

Corrin is an outstanding actor, showcasing the pain and torment of a woman feeling betrayed by her lover. With another role this year in “Lady Chatterley’s Lover,” they could find several paths to awards attention one year after nabbing their first Emmy nom for “The Crown.”

I love how the film is an inadvertent 1997 supporting actor contender reunion with Everett, who was a near-miss as Julia Roberts’ best friend in “My Best Friend’s Wedding,” and Roache, who played the young muckraking journalist Merton in “The Wings of the Dove.” Both are good, but are overshadowed by their co-stars star power. David Dawson also holds his own in key scenes with Corrin, but takes a backseat in the cast.

Adapted from the book by Bethan Roberts, the film is written by Ron Nyswaner, a former Oscar-nominee for “Philadelphia” (1993). It’s the type of movie that could garner the attention of the British voting bloc of the Academy, even nabbing a handful of BAFTA noms. As one of the top contenders for Amazon Studios, there could also be recognition for production design (from “The Imitation Game” Oscar-nominee Maria Djurkovic), costumes (from Emmy winner Annie Symons) and original score (from “Gravity” Oscar-winner Steven Price).

It won’t be easy for the streamer, but Amazon has the resources to deliver a campaign that will get the film in front of the right voters. Styles’ star continues to rise. We’ll see how high it gets.