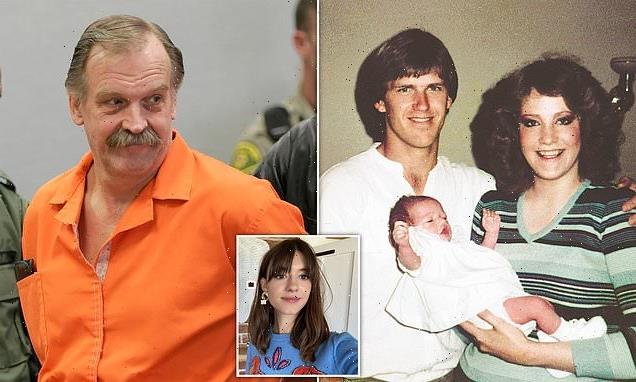 The brutal 1984 murders of a Mormon mother and her toddler who were killed by a relative will be featured in a new true crime series starring Daisy Edgar Jones.

Ron Lafferty, from Utah, claimed he had received a revelation from God to kill his sister-in-law Brenda and her 15-month-old daughter Erica because of her resistance to his fundamentalist belief in polygamy.

He and his brother Dan killed Brenda, who was beaten and strangled with a vacuum cleaner cord. She and her daughter died after their throats were slashed.

The case was made famous in non-fiction book Under the Banner of Heaven by Jon Krakauer, which is now set to be made into a Hulu series by Dustin Lance Black featuring the Normal People actress as well as Andrew Garfield.

Speaking about the project to Deadline, Lance-Black said: ‘After so many years of work, I’m incredibly grateful to Imagine and FX for their patience with and commitment to bringing this story to screen.

‘Raised in the LDS faith, my hope is that this true-crime thriller might shed light on the horrific brutalities perpetrated in the name of God in our own backyards.’ 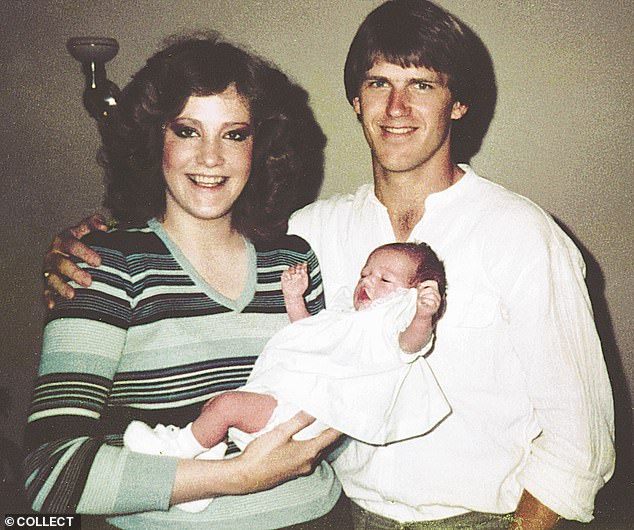 The brutal 1984 murders of Brenda Lafferty and her toddler daughter Erica, who were killed by two relatives because of their strong polygamist beliefs, will be explored in a new true crime series starring Daisy Edgar Jones (pictured, Brenda, Erica and her husband Allen)

The mainstream Utah-based Church of Jesus Christ of Latter-day Saints disavowed polygamy more than a century ago, but some church offshoots still practice it and consider themselves ‘fundamentalist Mormons’.

Brenda married Allen Lafferty, the youngest of eight children, raised in a Utah family that belonged to the mainstream church.

His older brothers Dan and Ron disapproved of the relationship.

For years, Ron had followed the script for successful young church members: He served a church mission in Florida and then returned to Utah to get married, have children and get a job. 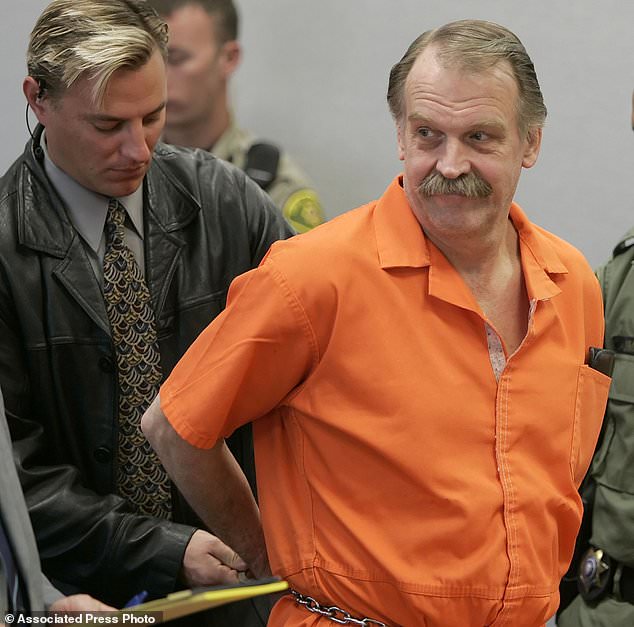 Ron Lafferty, from Utah, claimed he had received a revelation from God to kill his sister-in-law Brenda and her 15-month-old daughter Erica because of her resistance to his fundamentalist belief in polygamy

He also served on voluntary councils for his congregation and the community.

But in 1982, Ron began spending more time with his brother Dan, who believed the mainstream church should have never abandoned polygamy.

Ron eventually adopted his brother’s thinking and the two were excommunicated from the faith in 1983.

They joined a renegade polygamist cult called the ‘School of Prophets’ and Ron left behind his clean cut and well-groomed look for long hair and an unkept beard. His wife divorced him and moved with their children to Florida. 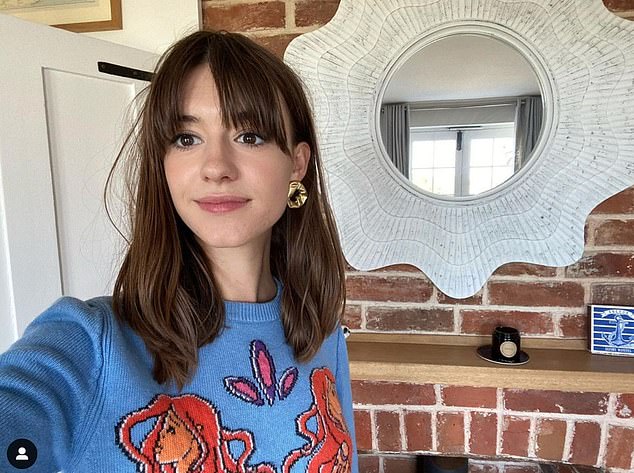 By 1984, the brothers had become enraged by the strong opposition to polygamy by Brenda.  She had agreed with the decision by Ron’s wife to leave him.

Ron believed he had received a revelation from God to kill Brenda and her daughter and he showed the members of the School of Prophets a written ‘removal revelation’ that allegedly called for the killing of Brenda and her baby. 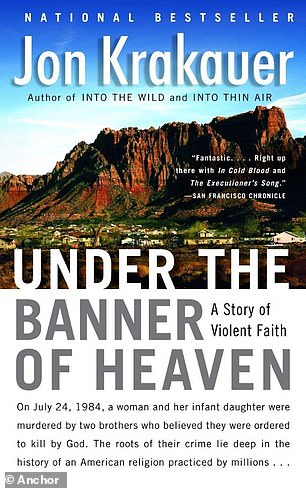 After other members of the School failed to honor Ron’s removal revelation, the brothers quit the School.

At a 2001 trial for the crime, Chip Carnes, who was riding in the getaway car, testified that Ron said that he had killed Brenda, and that Ron had thanked his brother for ‘doing the baby.’

Ron and Dan left the back of the apartment covered in blood, a witness said.

Allen later discovered his wife lying in a pool of blood in the kitchen and their daughter propped up against her crib.

After the murders, the police found the written ‘revelation’ concerning Brenda and Erica.

Ron was found guilty by a jury in 1985 and sentenced to death.

A federal appeals court in 1991 overturned his conviction because a trial judge used an incorrect legal standard to find Ron competent to stand trial. He was retried in 1996, found guilty by a jury and again sentenced to death.

Ron chose to be killed by firing squad decades ago instead of receiving a lethal injection – a choice given at the time to death row inmates. 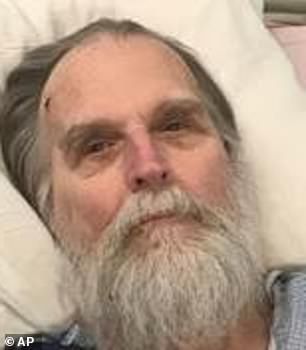 Dan (left, in prison in 2003) and Ron (right, in a photo released in August 2019) were enraged by the strong opposition to polygamy by Brenda and decided to kill her

Utah later changed its law, allowing firing squad executions only as backups if lethal injection drugs were not available.

The last time a firing squad was used for an execution in the in the U.S. was in 2010 when Ronnie Lee Gardner was executed in Utah for the 1984 murder of an attorney during a failed courthouse escape.

Ron’s lawyers had argued that he suffered from mental illness and that his death sentence was out of line with the life sentence given to his brother Dan Lafferty. 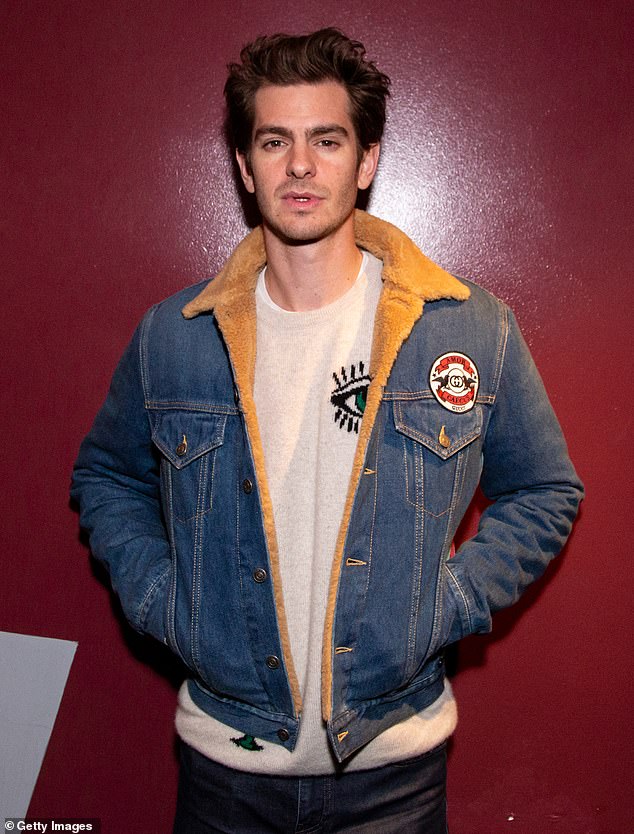 The series set among the Church Of Jesus Christ Of Latter-day Saints in Utah follows Garfield’s devout detective as he investigates the brutal murder of a young Mormon woman, Brenda

Ron died of natural causes at the state prison in Salt Lake City in 2019.

Daisy is set to portray Brenda in the series, while Andrew will play Pyre, an elder of The Church of Jesus Christ of Latter-day Saints (LDS).

Based on the 2003 book of the same name by Jon Krakauer, it’s been adapted by Oscar-winning American screenwriter Lance Dustin Black and will be directed by British filmmaker David Mackenzie, whose credits include Hell Or High water.

Passion project: The script comes from Oscar-winning American screenwriter Dustin Lance Black who was born into a LDS family and came to prominence with the 2008 biopic Milk

The series set among the Church Of Jesus Christ Of Latter-day Saints in Utah follows Garfield’s devout detective as he investigates the brutal murder of a young Mormon woman, Brenda.

It leads him to encounter an esteemed Utah family who are characterized by their fundamentalist LDS faith and deep mistrust of the government.

The investigation causes Garfield’s character to begin to doubt his own beliefs and his church’s teachings as he learns more about the murderer.

THE MURDERS OF BRENDA AND ERICA LAFFERTY

Dan and Ron Lafferty are both in prison for the 1984 murders of Brenda Lafferty and her 15-month-old daughter, Erica.

They slit their victims’ throats with a 10-inch boning knife and later claimed God had ordered the slayings.

The men were tried separately; Dan Lafferty is serving a life sentence, and Ron Lafferty — who claimed to have the revelation to kill — died on death row in 2019.

The revelation to kill their brother’s family came from Ron after Brenda spoke out against her husband Allen Lafferty joining his brother’s radical polygamist group.

Ron said they needed to be ‘removed’ so that, as God put it, ‘my work might go forward.’

Dan explained to the Salt Lake City Weekly in a lengthy 2014 profile that, as a devout Mormon child, he struggled with seductions of the flesh.

So, as an adult, he began to see such desire not as a test from God, but as one of his gifts.

He believes the righteous will be treated to a 1,000-year party during which they’ll be filled with the light of Jesus and have sex the likes of which have not before been experienced on Earth.

As the prophet Elijah, Dan believes it is his duty–as the only one who can see the continual cycle that begins at birth and starts over with the thousand-year party–to cull from the Earth the ‘weeds’ of the Devil that have grown for 6,000 years.

Only when he personally replaces these weeds with God’s righteous ‘wheat’ can the 1,000 party begin again.

‘When he comes back,’ Dan says of his God of Love, ‘he’s gonna be smoking a doobie, saying, ‘Tired of this world? Well, it’s time to party.’ I really believe it.’