In November last year, Today reporter Brooke Boney wrote a thought-provoking column for Sunday Life explaining that she was growing concerned about her declining fertility. Fresh from a breakup at age 33, she could hear her biological clock ticking ever louder. In researching her options, she was relieved to discover that egg freezing could be the answer. In the months since, Brooke has undergone the procedure and wants other women to know what’s involved, so they, too, can be empowered in their decisions. 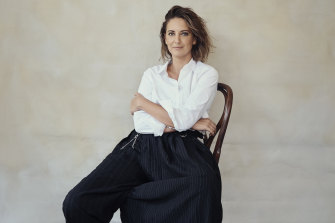 “My mum was a single mum so I don’t think it’s the worst outcome to do it on your own. I just have to wait and see what’s out there for me.”Credit:Hugh Stewart

What got you first thinking about freezing your eggs?
One of my friends mentioned that she was doing it and she was surprised she didn’t get as many eggs as she thought she would. So, I started thinking, “OK, she’s only a few years older than me, I should really get my skates on.” You always have in the back of your mind that you want to have a family and you want to have children but you don’t really plan for it in the same way you do jobs or travel or education.

Also, because I’d just gone through a breakup with someone I’d been with for a few years, it was probably going to be a while before I’d get back to that stage with someone new. I didn’t want to put pressure on myself; I didn’t want to date with the intention of finding someone to do that with.

What was the first step you took towards egg freezing?
Friends of mine recommended places that they’d been to, so I put in calls to places that I liked the look of and where my friends had good experiences. Then I just spoke to my GP and she recommended one to me as well. Then I met with the specialist and they explained the process, like how your cycle works and how they extract the eggs and what the hormones do.

I have learnt a lot. I knew that you were born with all the eggs that you are ever going to have but I didn’t realise how quickly fertility drops off after the age of 35. That was really daunting and made me feel a sense of urgency around it.

Did they explain the success rates?
They were very upfront, which is quite scary. You can only have a certain number of eggs frozen and that only gives you a certain percentage, depending on what age you are, of success of a “live birth”. It makes you realise there are all these women going through these really big things in silence. We don’t ever really talk about fertility and how painful it is.

“There are all these women going through these really big things in silence. We don’t ever really talk about fertility and how painful it is.”

What did the process involve?
You have to get a blood test to make sure you’re at the right part of your cycle, then you’re injecting yourself with one injection a day initially. It then moves up to two, then three injections each day. You have all of these needles in the fridge with little vials of this solution and you have to stick the needle in your tummy. I really hated that part. I cried the first time I had to do it. I ended up getting Ally Langdon, who I work with, to help me with the injections every day and that was easier than doing it myself.

Because we’re in lockdown, I can’t see my mum and I don’t have any friends popping over, so we were in a bubble on the Today show and that’s why I asked Ally if she would mind helping me. I think she might have enjoyed it a bit too much! I was like, “Ally, settle down!” She was poking
me like a pincushion! [Laughs]

What happened on the day of your egg retrieval?
You go there in the morning and you get put under a twilight anaesthetic. Then they go in and get the eggs out and tell you how many they got and how many are capable of being frozen. It all sounds really technical and medical but it was such a lovely experience to come to understand that your body as a thing that’s capable of doing something that’s wonderful. It made me have a greater reverence for women because we’re capable of growing human life. We don’t give our bodies enough credit for the things that we put them through. I know this sounds a bit woo-woo – maybe it was the hormones!

How did being in lockdown affect the process?
It was a lovely thing to go through during a lockdown as we weren’t allowed to do anything anyway, so I didn’t feel like I was missing out. You see all the changes in your mood and in your body, and all of that shifts with the hormones that you’re taking. It made me realise that I really do want to have a family and I really do want to have a baby.

“It’s just about having a plan in the same way that you would plan to move to another city, or for a job you want, or to go to uni. It’s just about being a bit more mindful about it.”

Were you happy with the results?
I got a pretty good result – they were happy with it. But I am thinking I’m going to do another round, just to be extra careful. Also, because we’ve got at least another couple of months of some sort of lockdown, I figure I might as well do it because I’m not spending money on an overseas trip or buying clothes to wear, or spending money on dinners, so I’d rather have a bit more security and increase my chances. Everyone I’ve spoken to has said you will never regret doing it again. Keep in mind, something like nine out of 10 women don’t go back and use their eggs. Most of the time, people either have children naturally or choose not to have them at all. So this is more of a security thing.

What did it cost?
It is expensive; it’s around $7000. But I think it’s worth it for the peace of mind. I think it should be included in salary packages and divorce settlements. It’s not just a women’s issue, fertility is a broad societal issue, particularly to allow for women to move up the corporate ladder and close that gender pay gap.

When do you think you will use your frozen eggs?
I think it’s nice just knowing that they’re there. I have no idea what’s going to happen in the next few years, given the way the world is. But that’s another weird side effect of the pandemic too – the effect it’s having on women and fertility. I know people who are in long-distance relationships, so it’s impossible to get pregnant.

Would you consider doing it alone?
I would consider going alone. My mum was a single mum, so I don’t think it’s the worst outcome to do it on your own. I just have to wait and see what’s out there for me. But this made me feel like I had a bit more control of parts of my life, which is something I think we’re all really missing at the moment.

Do you wish you’d known more about fertility when you were younger?
I wish people had spoken more openly about it when I was in my 20s. I think there is this illusion that we have a lot longer than we actually do. There’s no harm in going to find out where you’re at. It’s better to find out, rather than wait until it’s too late or leave it to chance. If this is something that’s important to you, then you should prioritise it.

What message would you give to other women?
I don’t want people to miss out, or settle down with someone they don’t like, or not take a job they really want, just because they didn’t plan for their fertility. I’m not even in a situation where it’s urgent and I need to do this as soon as possible. It’s just about having a plan in the same way that you would plan to move to another city, or for a job you want, or to go to uni. It’s just about being
a bit more mindful about it, rather than just leaving everything to chance and hoping it will work out.

This article appears in Sunday Life magazine within the Sun-Herald and the Sunday Age on sale September 26. To read more from Sunday Life, visit The Sydney Morning Herald and The Age.