"Although he was never bullied or threatened by his family, he took the opportunity to apologize 20 years later!!!"

Britney Spears is digging up some difficult memories as she begins to write her book.

In a since deleted post to Instagram on Monday, the “Toxic” singer opened up about how her upcoming memoir has served as a therapeutic outlet for her to address unpleasant experiences.

“I’m writing a book at the moment and as it’s actually healing and therapeutic … it’s also hard bringing up past events in my life I’ve never been able to express openly,” Britney began her caption. “I can only imagine that I do sound childish but I was extremely young when the events took place.”

She continued, “But instead of using my heart, I’m using the intellectual approach as Justin [Timberlake] did when he apologized to Janet [Jackson] and me. Although he was never bullied or threatened by his family, he took the opportunity to apologize 20 years later!!! Timing is EVERYTHING!!!”

The pop diva previously referenced Timberlake’s apology back in February 2021 by posting a video of herself dancing to one of his songs on Instagram, appearing to accept his public mea culpa.

The social media video came after JT addressed both Spears and Janet Jackson and took accountability for falling, “short in these moments and in many others and benefited from a system that condones misogyny and racism.” (You can read his full statement in the link below.)

Justin Timberlake Apologizes to Both Britney Spears and Janet Jackson

In the post from Monday, Britney also addressed her mother and sister’s respective memoirs, calling them out in a less forgiving way.

“My mom and my sister also did the ‘intellectual approach’ in indulgence by writing their own books as I couldn’t even get a cup of coffee or drive my car or really anything,” Spears wrote, referencing her 13-year conservatorship. “I’m not the type to bring up UNCOMFORTABLE CONVERSATIONS because it’s just NOT RESPECTFUL … but come on, LET’S ACTUALLY TALK ABOUT IT!!!”

All The Celebs Issuing Apologies to Britney Spears (So Far)

Britney recounted the moments she had been mistreated during her conservatorship and throughout her career. She specifically shared instances that included being told not to complain about the restrictions of her conservatorship, and not being able to spend time with her childhood friends at the spa when they visited her during her Las Vegas residency.

“I never felt heard ever!!! I was screaming inside and no matter what I said it was always looked down upon,” she stated.

“So sorry if I’ve offended anyone by writing these stories, but just as my sister can legally mention my name in her book over 200 times, cry on TV and get a heartfelt ‘awww’ from most … I also have the right to share a couple of paragraphs on my Instagram,” Spears concluded. 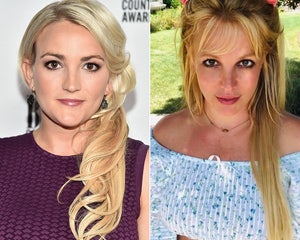 Jamie Lynn Spears Accuses Britney of Not Telling Truth, Says She May Have to Set Record Straight Herself