Oops, she wore it again! Britney Spears recently tried on a pair of pants she hasn’t worn in over 20 years — and they still fit her perfectly!

“Went to the old house yesterday to finish packing and look what I found … these adorable white jeans,” the pop star, 40, wrote via Instagram on Thursday, June 23, alongside a video of her sporting the low-rise white jeans. “No lie I think it’s been 20 years since I wore white jeans and they actually fit 🌹🌹🌹 !!!”

The singer donned the early 2000’s threads with a frilly orange crop top that showed off her belly ring. She accessorized the look with sleek tan pumps while rocking the chic new haircut that she debuted a day prior.

“Haven’t been on my honeymoon yet … got married and moved into a new house around the same time … not the smartest thing to do,” the Crossroads star captained a carousel of photos of herself and her husband Sam Asghari by the swimming pool with her new ‘do on Wednesday. “It’s so weird I wake up and everything is new … new pool … new kitchen … new bed … I think I’m in shock!!! Figuring out a couple of things … I definitely like being outside but I also like being inside.” 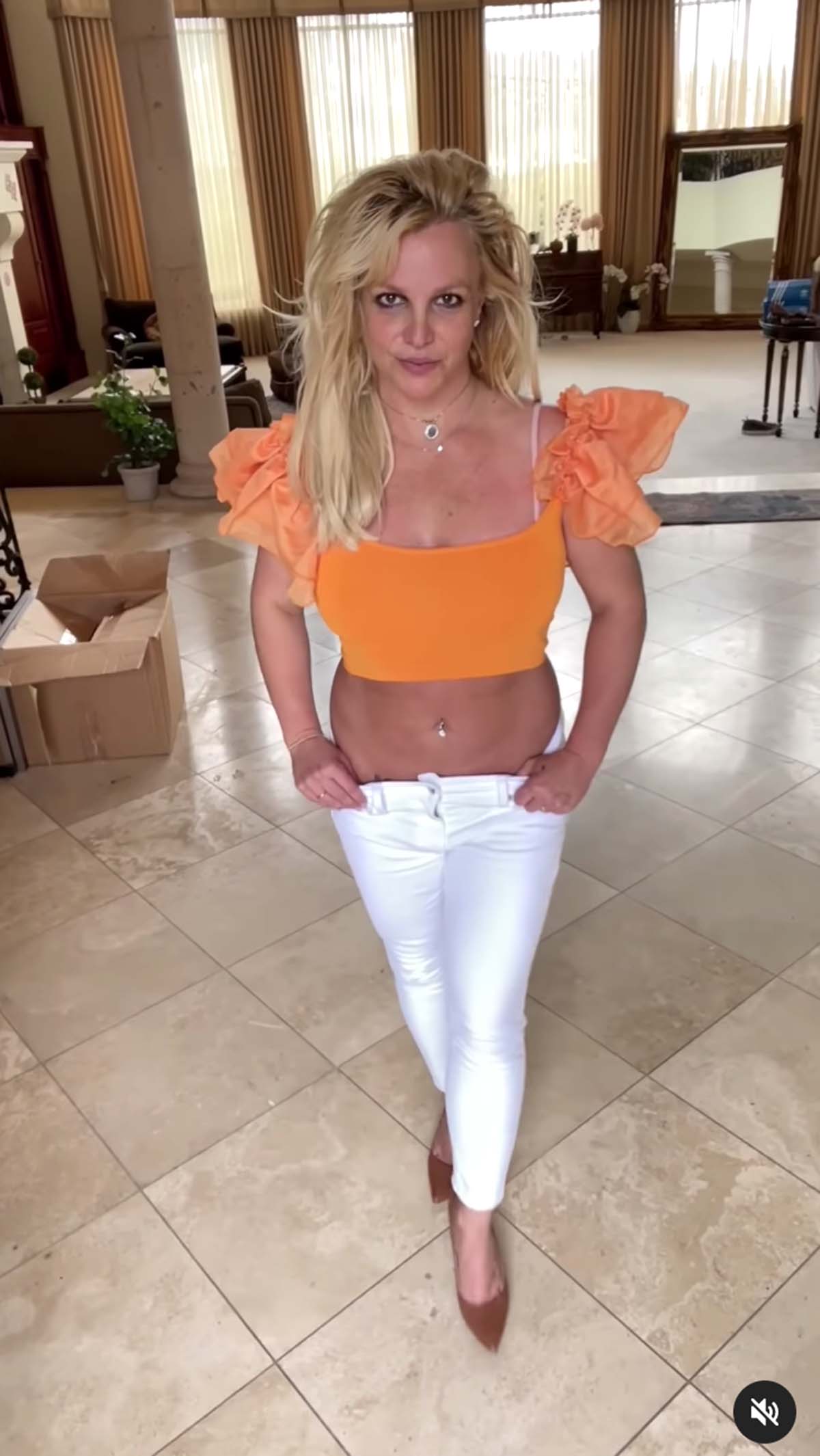 The “Lucky” singer concluded the post by revealing she had “already went down” her pools slide 4 times that day, adding, “I cut all my hair short and my husband just made me a steak … life is good!”

The “…Baby One More Time” artist and Hacks alum, 28, tied the knot at the singer’s former Los Angeles home on June 9. Spears stunned in a custom gown by Donatella Versace before changing into a black Versace mini dress, a two-toned ensemble and later a red mini dress for the reception, a source told Us Weekly at the time. The groom also wore Versace.

“Britney arrived in this beautiful horse carriage that looked like it came straight from a fairy tale,” a second insider told Us exclusively. “Britney cried during the ceremony and Sam was sweetly wiping her tears.”

Britney Spears and Sam Asghari: A Timeline of Their Relationship

The nuptials were attended by some of Spears’ closest A-list friends, including Madonna, Selena Gomez, Drew Barrymore and Paris Hilton, who allegedly passed up an opportunity to DJ for President Joe Biden in order to attend her BFF’s big day.