It would be easy for Daniel Andrews to dismiss Matthew Guy, his new political opponent, as irrelevant and inconsequential to his plan for the state.

That will be his line publicly of course, as it was with Michael O’Brien, who Andrews repeatedly refused to refer to by name. 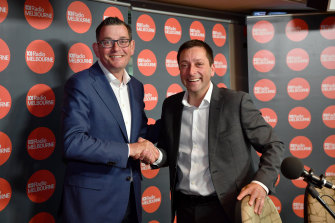 Premier Daniel Andrews and then opposition leader Matthew Guy in November 2018 before the state election.Credit:Joe Armao

Guy’s return to the Liberal leadership was cause for celebration among some Labor MPs on Tuesday. After all, it was only three years ago that the Coalition suffered a stunning defeat and was reduced to just 27 spots in the 88-seat lower house under the stewardship of Matthew Guy.

It was a trouncing.

While news of Guy’s victory had some Labor campaigners dusting off their lobster suits, wiser heads were rethinking their strategy, knowing that ignoring the new Opposition Leader would no longer be an option.

Outwardly Guy tried to usher in a genteel new age on Tuesday, but his political instincts are those of a brawler. And it’s a skill set best suited for opposition.

“We would do well not to underestimate him,” one senior Labor strategist said yesterday.

It’s a mistake Labor has made before.

In 2018,– when Scott Morrison became Australia’s third prime minister in as many years, federal Labor failed to change its approach in the false belief the election was in the bag. In the months leading up to polling day, Labor relied on a campaign designed to defeat Malcolm Turnbull, a more genteel and urbane political opponent.

As with Morrison, Guy lives and breathes politics. Former premier Denis Napthine – who employed Guy as a staffer and later promoted him to planning minister – believe politics is in his DNA. 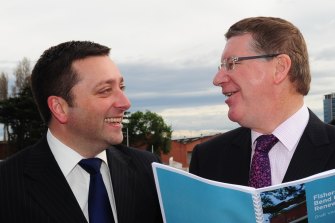 “It’s in every fibre of his being,” Napthine said.

Outside his party room this makes Guy a polarising figure. His controversial time as planning minister coupled with his aggressive tone during his previous stint as opposition leader have made him a big target. But his combative approach means he cannot be ignored.

By contrast, O’Brien was never a natural-born politician.

Hardworking and blessed with smarts, O’Brien studied law at Melbourne University and later joined the Victorian Bar where he also lectured part-time. It’s the sort of resume that plays well in boardrooms but does little to ignite the Liberal Party’s conservative base. 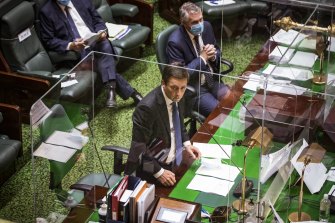 Colleagues, even those who spent months undermining him, still acknowledge O’Brien’s work ethic, but such a framing was never going to be enough to rev up the sluggish opposition.

O’Brien ignored repeated warnings from his colleagues to rub the collective ego of his backbench and shower them with gratitude, a political reality that needs to be done even if it isn’t deserved. He was encouraged to humanise himself with softer profile pieces in the media, a move which backfired when he was photographed on the beach with his two dogs and not his wife and children, whom he preferred to keep away from the spotlight.

There are some political realities that cannot be ignored.

Labor pollsters believed that while O’Brien may have won back more voters in Hawthorn, Portsea and Surrey Hills, he posed little threat in Melbourne’s outer suburbs where the government is worried it’s losing support.

By contrast, Guy plays well with tradies on Melbourne’s fringes, many of whom have been the hardest hit by the pandemic and could be ready for a new premier by November next year.

While not impossible, it will be incredibly difficult for the Coalition to win next year's election. But underestimating Guy and taking refuge in seemingly poor poll numbers will come at a cost.