A security guard who tested positive to COVID-19 while working at one of Victoria’s troubled quarantine hotels has told an inquiry into the scandal that he then went to work as a food delivery driver because he was bored.

The guard, who can only be identified as Security 16, gave evidence on Monday that the security business he worked for ordered guards to hide shortages of protective gear from Rydges Hotel staff. 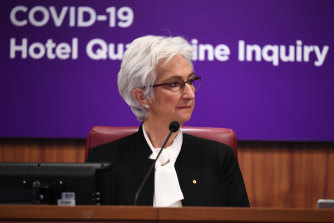 Security 16 was among the first of the workers on the program to develop COVID-19.

In more evidence of shambolic performance in the quarantine hotels, Australian mixed martial arts star Kaan Ofli told the inquiry that he and his wife had to plead for basic food supplies during their quarantine hotel stay in April after Department of Health and Human Services officials supplied enough for only one person.

Mr Ofli told the inquiry that he felt humiliated by having to make daily phone calls pleading for basic food and drink while he was quarantined at the Pan Pacific Hotel in April, before the DHHS realised there were two people, not one, staying in the hotel room.

The inquiry later this week will examine the role of the Department of Jobs, Precincts and the Regions in setting up the quarantine program before moving on to questioning hotel staff.

Former judge Jennifer Coate, chairing the inquiry, warned on Monday that she expected prompt production of documents from government departments so the inquiry could report as planned in November.

Security 16 told the inquiry that when he first began working at Rydges on Swanston, there was plenty of personal protective equipment for the guards and they were changing gloves and masks whenever they left their posts.

But within days, the former guard told the inquiry, supplies of PPE began to dwindle and his supervisors were instructing Security 16 and his colleagues to put their masks in their pockets when leaving their posts and to put them back on when they returned.

Guards were instructed to ensure the masks were taken off and put back on away from the hotel’s security cameras, Security 16 said.

He went on to testify that he had taken shifts as a food delivery driver while waiting for his test results and again after being in isolation for just 10 days, telling the inquiry he was bored.

"I felt pretty good and I was getting bored at my house," Security 16 said.

The former guard went on to work at his other job in a warehouse before he developed serious COVID-19 symptoms and was hospitalised.

The inquiry also heard from a senior security guard, known only as Security 2, who said in his witness statement he had dismissed three guards from the program, one for falling asleep on the job, another for PPE failings and a third guard was sacked for talking to a reporter from The Age.

Hearings will continue on Thursday.