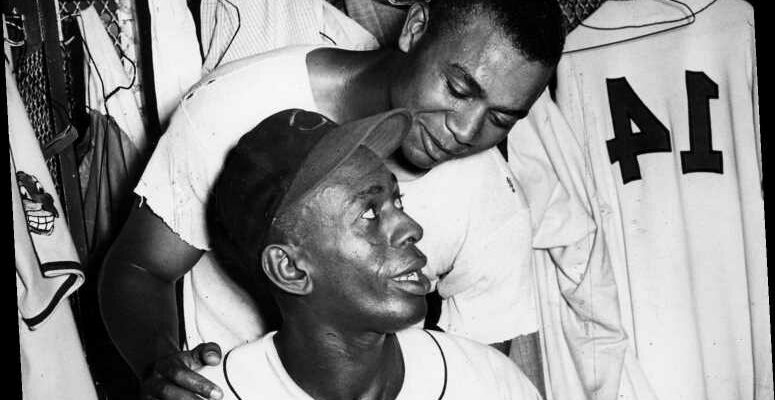 The failure of Major League Baseball owners to integrate until the Brooklyn Dodgers introduced Jackie Robinson in 1947 was not only racist. It was also bad for business and bad for the win-loss column.

Case in point: The 1948 Cleveland team, which, largely thanks to its Black stars Larry Doby and Satchel Paige, won the World Series and set attendance records along the way.

Author Luke Epplin chronicles the overlooked but historically significant team in his insightful, deeply researched new book, Our Team: The Epic Story of Four Men and the World Series that Changed Baseball, which went on sale today.

Epplin casts the team as emblematic of America's sense of optimism in the years immediately following World War II: They were integrated, one of only three teams that year with Black players. And their owner, Bill Veeck, was ahead of his time in both racial politics and the forward-thinking ways he'd draw crowds to the stadium, using then-gimmicks like fireworks, live music and even a children's nursery so parents could enjoy the game.

The book tells the team's story through Veeck and three players: Doby, Paige, and Bob Feller. All four are in baseball's Hall of Fame. All four played a key role in the sport's integration.

Veeck, who was white, grew up in Chicago attending Negro League games and had a progressive, inclusive sensibility. He was famously an iconoclast — he once organized a promotion where fans voted on in-game strategic decisions — and Our Team underscores that it often takes an outlier like Veeck to bend the arc of history toward justice. Doby endured every ounce of the racial abuse that the more famous Robinson did and was a great player in his own right. But because he debuted 11 weeks after Robinson, he has gotten a tiny fraction of the recognition in history. Our Team gives this American hero his due, and also notes how important it was for the cause of baseball's integration that Doby, who had struggled his rookie year, blossomed into a star in his second season.

"It seemed that as long as Jackie Robinson appeared singular in the eyes of the white baseball establishment, the larger project of integration would remain precarious, vulnerable, by no means a settled matter," Epplin writes.

Doby was 23 when he debuted. Paige was 41 and had been a star pitcher in the Negro Leagues for nearly as long as Doby had been alive, only to have his path to the Majors blocked by segregation until he was long past his prime. But Paige was resourceful. Despite the color barrier, he used his talents for pitching and comedic showmanship to create a mythology around himself that transcended race. Helped along by tall tales of his pitching prowess, he became a bankable star in offseason "barnstorming" games that entertained Black and white fans alike.

When he became the second Black player on the Cleveland team, he was Doby's roommate. But their relationship was chilly. There was a generational divide between the two: Paige, as a younger player, had done what he had to do to get the money and fame he deserved. Doby, for whom the doors of the big leagues were opened, "was sensitive to white perceptions of Negro League players as clowns or showmen," Epplin writes. "He worried that Paige's use of humor to win over new teammates along with his laxness about team rules and regulations presented obstacles to gaining the respect that Black pioneers of Doby's generation sought in the Majors."

Paige's longtime pitching opponent on the barnstorming circuit was Feller, a white star pitcher in the Major Leagues whose service in World War II had cut into his baseball earnings. But Feller was a shrewd businessman who scheduled exhibition games against Paige because he recognized the moneymaking potential in the best white pitcher squaring off against the best Black pitcher. Just as Paige was a self-promoter, so was Feller, marketing himself in terms of baseball's pastoral mythos: He'd grown up on a farm in Iowa and worked tirelessly with his father to build up the arm strength to become a pitching phenom who made the Majors at age 17 and was already a fixture on Cleveland's roster by 1948.

Epplin presents Feller in complicated terms. On one hand, he was progressive: Back then, agreeing to play against Black players — and be exposed to defeat — required an uncommon open-mindedness. On the other hand, he stubbornly insisted that Black players had been kept out of the Majors because of a deficit of talent in the Black community rather than racial discrimination. All four men were instrumental in Cleveland's run to the World Series. First, the team won a one-game playoff against the Boston Red Sox to win the American League, then they beat the Boston Braves to win the title. But that euphoric, hopeful moment was short-lived. As Epplin writes, "The promise of 1948 wasn't kept."

This was true for the baseball team: The notoriously hard-luck franchise hasn't won a championship since.

It was also true for the city, which in the latter half of the 20th century fell on hard times, hemorrhaged population and became something of a national punchline.

It also applied to the seeming racial harmony that 1948 pointed toward. Baseball was glacially slow to integrate. An in the following decades, America didn't shrug off and overcome racism like Doby overcame his poor rookie season. After the World Series, when Doby returned to his hometown of Paterson, N.J., and tried to buy a new house, nobody would sell to him.

Our Team: Our Team: The Epic Story of Four Men and the World Series that Changed Baseball (Flatiron Books) went on sale today.