Boden has been criticised for its ‘sexist’ range of children’s clothing.

The British retailer, worn by the likes of the Duchess of Cambridge and Holly Willoughby, was slammed by parents for reinforcing gender sterotypes, with one branding it ‘narrow minded’.

Meanwhile boys’ t-shirts and jumpers are printed with dinosaurs, cars and words like ‘genius’. 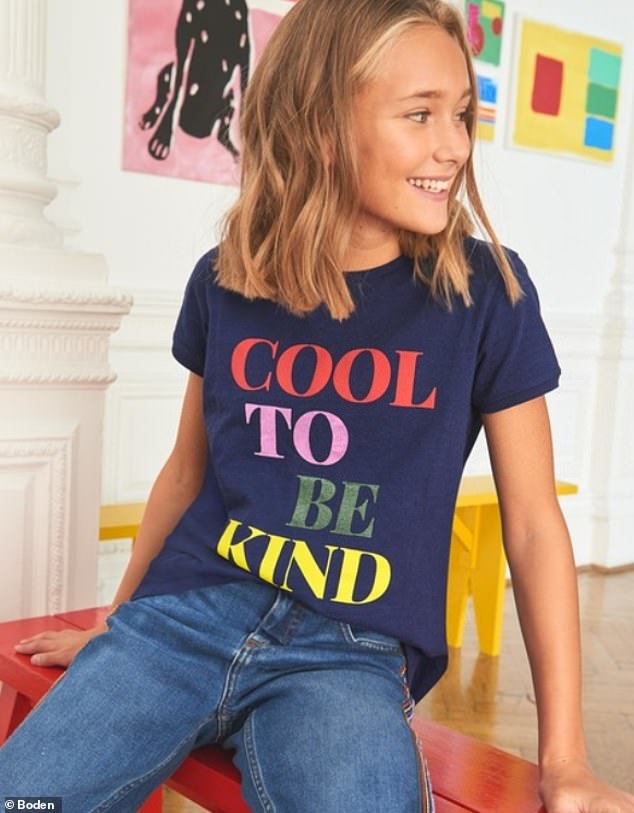 Boden has been criticised for its ‘sexist’ range of children’s clothing. Girls’ garments feature motifs like rainbows and hearts accompanied by slogans like ‘it’s cool to be kind’, pictured 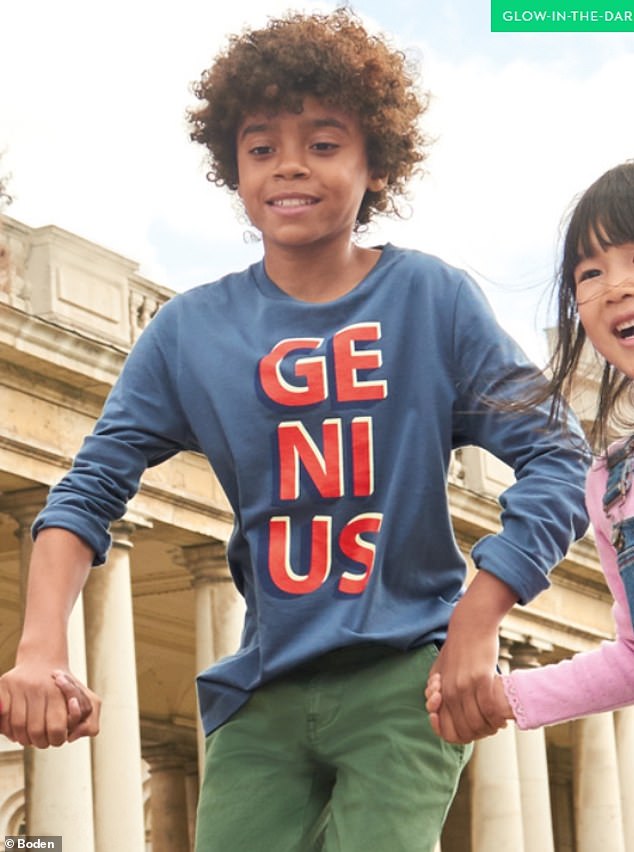 Meanwhile boys’ t-shirts and jumpers are printed with dinosaurs, cars and words like ‘genius’

Mother Lindsay Tilley, of Northamptonshire, was among those who called out the retailer, tweeting: ‘Disappointed to see you join the sexist ranks of slogan tees for kids. Smile, girls and be a genius, boys. #everydaysexism.’

Meanwhile Helen Mackinnon posted: ‘Oh dear Boden. Thought you were better than this. Where are the girls’ ‘Genius’ T-shirts? Where are the boys’ ‘Cool To be Kind’ T-shirts? Nauseating and narrow-minded.’

And Kate O’Sullivan, 37, of Edinburgh, added: ‘Ew @bodenclothing your latest kids range has some pretty hideous messaging around gender. Boys get “warrior knees” and to be a “genius” while girls have to be nurturing and “Choose Happy”.’

Speaking afterwards about the post, Kate explained she feels like she is fighting a ‘losing battle’ to make sure her daughter Betsy, five, isn’t being bombarded with sexist messages. 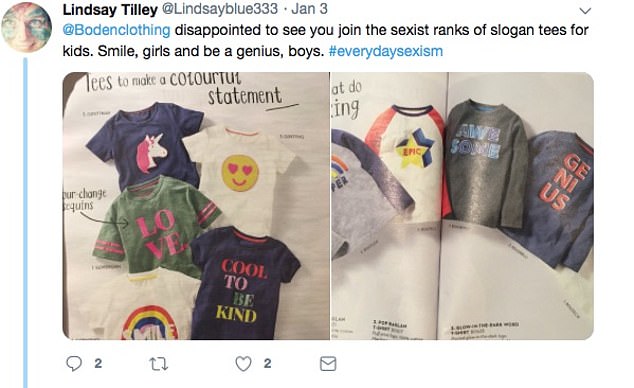 The British retailer, worn by the likes of the Duchess of Cambridge and Holly Willoughby, was slammed by parents for reinforcing gender sterotypes, with one branding it ‘narrow minded’

She said: ‘As parents we have to work really hard to battle the stereotypes and help our daughter see more positive influences… Despite our efforts, everything around her is telling her what’s for boys and what’s for her.

‘She’s five. Toys and clothes are priming our kids for their future ahead, for girls sadly it seems to mostly involve unicorns and reminding them to look pretty.’

Boden’s children’s t-shirts cost between £18 and £22. Among the designs are a boys’ t-shirt with boxing gloves and the message ‘champ’, while a girls’ t-shirt is emblazoned with a rainbow and the word ‘smile’. 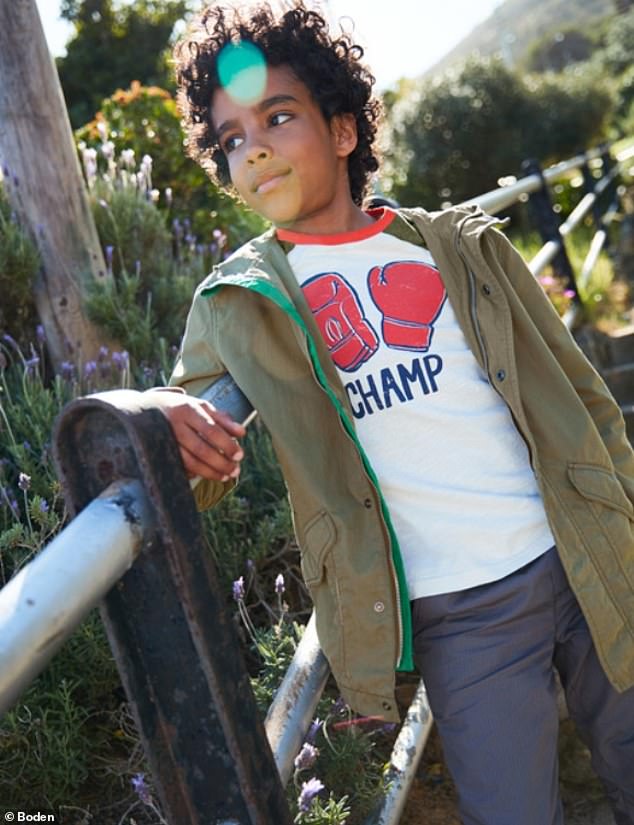 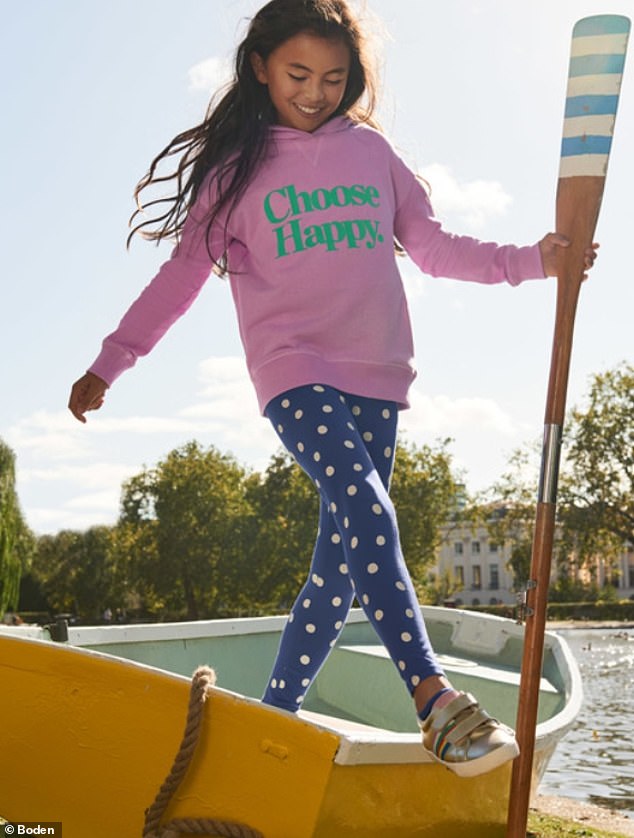 The brand, which started off selling through catalogues but is now available online and in bricks and mortar stores, has long been a wardrobe staple for ‘yummy mummies’ and their children thanks to its breton tops and sensible wrap dresses.

Replying to Ms Tilley on Twitter, Boden said: ‘We are very sorry to disappoint you Lindsay.

‘Please know that we take this topic very seriously, and we will pass your feedback along to the highest powers that be.

‘Rest assured that we understand how important this is and are using this feedback for future campaigns.’

A spokeswoman for Boden said the company did not wish to comment on the complaints.

Boden was founded Johnnie Boden in 1991. It initially only sold menswear before expanding in women’s clothing and childrenswear.

It was initially known as a catalogue retailer. It is now available online and in brick and mortar stores.