Taking a page from everyone from FKA twigs to Sufjan Stevens, BLACKSTARKIDS’ dynamic new album is a reflection of ‘where they are now,’ which is a celebration of life and ‘having a good time.’

It has been a momentous year. Nirvana’s Nevermind turned 30, as did A Tribe Called Quest’s The Low End Theory and Pearl Jam’s Ten. Weezer’s Pinkerton turned 25, and the band’s Green album marked its 20th anniversary. Both 2Pac and Jay-Z’s All Eyez on Me and Reasonable Doubt crossed the quarter-century mark, and a plethora of records turned ten years old. And while the calendar has been dotted with dates celebrating the past, one date — October 15, 2021 — marked something significant regarding music’s future: BLACKSTARKIDS released their debut album, Puppies Forever.

For those who’ve followed the trio — Ty, Deiondre, and The Babe Gabe – their Dirty Hit debut is the culmination of the sound they’ve been growing for years. For those just hearing about the Kansas City natives, Puppies Forever is the perfect introduction to their limitless music, one defiant of genre and classification. BLACKSTARKIDS bathe in the haze of 90s alternative while stirring in Aughts’ pop-punk, 2010’s hip-hop, and a double-dose of timeless pop sensibility.

“It’s just the vibe of it is like, ‘Did you all hear this the other day?’” says Deiondre. ” ‘Yeah, that was dope. Let’s make something like that.’ I want our music to feel like that. It’s just hanging out, and you’re able to play while hanging out too. That’s how most of the songs came about, anyway. Just from conversations we have with each other.”

“Just really on the chill side things, but really cool at the same time,” adds Deiondre. “I don’t even know how to specifically word our sound, most of the time either…”

“Yeah,” interjects Ty. “If somebody asked me to describe our sound, I will be like, ‘Which, one?’”

That patchwork sound first began to turn heads with 2019’s Let’s Play Sports, the first project in a trilogy that includes the group’s two releases in 2020 – Surf and Whatever, Man. The new album showcases growth in the band. “We’re just kind of in a different place in our lives than when we were when we were making the trilogy,” says Ty. “I feel like the trilogy definitely summarizes our life –leading up to how we even became this band. And then Puppies Forever is kind of reflection of life as [it is now].”

“We’re definitely on the good side of things with Puppies,” says Deiondre. “We’re in the future we’ve been talking about in the past couple projects, for sure. We’re touring right now. We’re playing all the songs. We’re having a good time.”

The band is also meeting their heroes – almost. BLACKSTARKIDS played Riot Fest for the first time this year. It was the trio’s first time at a festival, period. In an on-location interview with iHeartRadio’s The Adventures of Pipeman, the group said they were hoping to meet Ice-T since the rapper/actor was scheduled to play with his Grammy Award-winning group, Body Count.

“We were so close to him. So close to him,” says Gabe. “Our trailer was right next to his, and we had a bunch of interviews to do in the middle of his set. So, I was really disappointed,” added Deiondre. Ty noted that he could have met Ice-T but opted not to. “He was very close to me. I could’ve walked up and talked to him, but he didn’t seem… I like Ice-T a lot. I love him a lot, but it’s just, he’s very hyped. He didn’t seem like he was in the mood to talk to anybody.” When asked when he was going to make the connection happen, Ty says, “when I’m worthy of Ice-T. I need to put in some work before I talk to Ice-T.”

That day is coming sooner than Ty thinks. Puppies Forever is set to be one of the albums that soundtracks a generation. The album’s seamless blend of influences and sounds reflects not just a lifetime with the Internet’s boundless access to every music known to humankind, but a sharp creative vision – one that extends beyond the music.

“We have to take the time to do the things around the songs,” says Ty. “We end up sitting on the songs just to make sure that we know what we want to do with them after they’re done.” 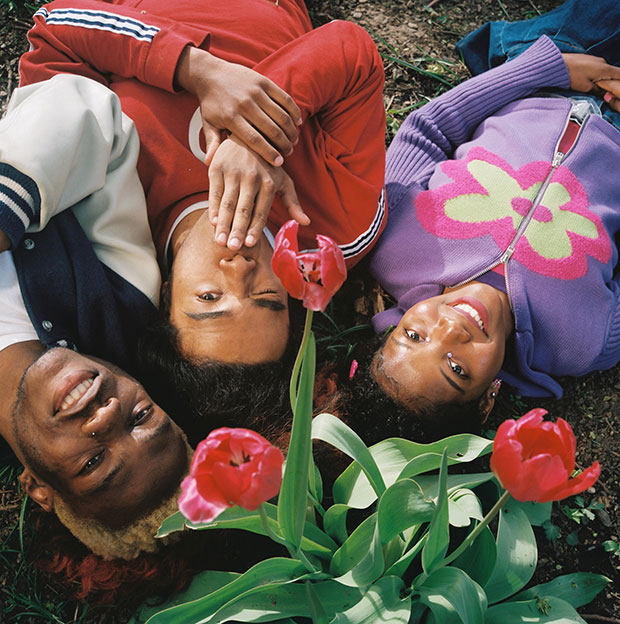 Though the band’s approach is almost instinctive, there have been moments when allowing a song to simmer has yielded unexpected results. “This song, ‘Frankie Muniz’ — at first was my least favorite song on Whatever, Man,” says Ty. “It wasn’t going be a single, but I don’t know what happened because we were going to do ‘Tender In Love’ as the single, which is really weird to me now. But, we ended up doing ‘Frankie Muniz’ for some reason, and now that’s our most-streamed song. It’s one of my favorite. It’s probably my top five songs that we’ve ever made.”

On Puppies, Gabe’s favorites are the surging “Jimmy Neutron” and the head-boppin’ “Time Flies Flies When You’re Having Fun.” Ty echoes her choice while throwing love for the dreamy “Pals.” Deiondre likes “Piss Drunk Kids,” a celebration of the highs and lows of being young. The penultimate song, “I Hate Being In Love,” is the New Order song that bassist Peter Hook wished he had written.

“I came up with that song title just randomly,” reveals Ty. “I had written it down in my notes. I just knew I wanted to use it for something.” The song was made around Whatever, Man but didn’t fit in the tracklist. “With Puppies, it just made sense for what was going on in our lives. Not even just with the sonics, like what we were doing with the album. It just made sense, and so that’s kind of how that song came together, and we were definitely inspired by ’80s movies, like John Hughes movies stuff like that, like [Ah-Ha’s] ‘Take On Me,’ and the video was an inspiration and then like Simple Minds‘ ‘Don’t You Forget About Me.’ Sh-t like that.” 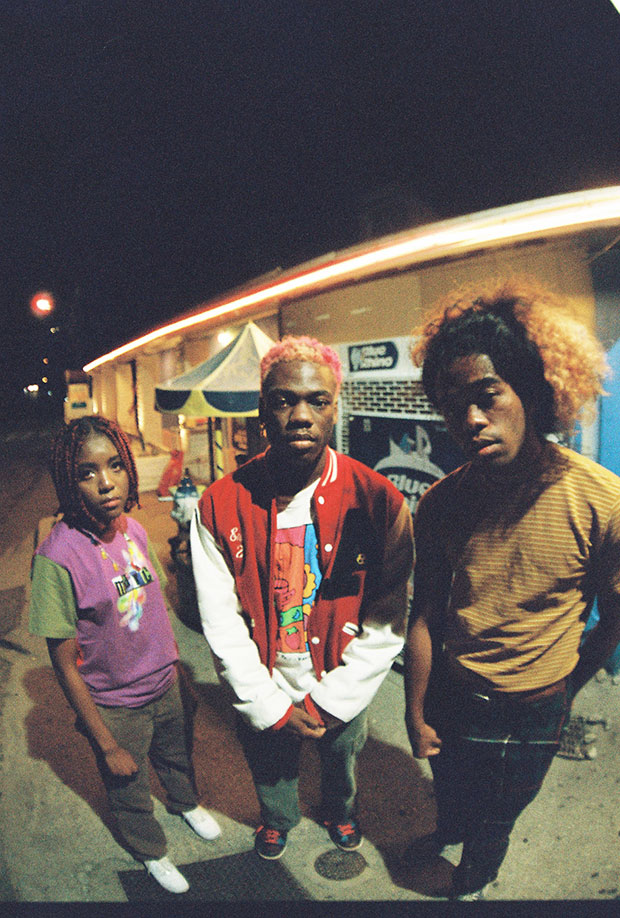 The group will soon share this take on 80s movies when they hit the road at the start of November, supporting fellow Dirt Hit act, beabadoobee.

“Bea is especially somebody who we now view as a peer and contemporary,” says Ty, “which is awesome. But still an influence and like somebody who was doing the stuff that we wanted to do, just a little bit earlier we were. So we were definitely looking at her videos at home like, ‘Damn, she’s going crazy.’ And we found out she’s the same age as us. “So it was even more of inspiration when we were finishing Surf to go crazy with what we were doing. So now, to be label mates with somebody who we were literally looking to as inspiration is crazy.”

Acts like BLACKSTARKIDS and beabadoobee are poised to make Dirty Hit the Sub Pop of Gen Z. Being on the same label as The 1975 and Rina Sawayama isn’t lost on the group (“They’re a big influence on the stuff we’re doing,” says Ty ), and they’re quick to give love to labelmates. “There are lots of people on the label who are doing cool, crazy shit. Like my friend Medici is our label mate, which is crazy, because he’s amazing. He hasn’t put anything out yet, but you guys will know who that is soon.”

Soon is a good word to apply to BLACKSTARKIDS. Soon, everyone will know who they are. The new album has already received great reviews from places like The AV Club and Consequence. Soon, they will be selling out headlining tours. Soon, they might even have their own movie, a version of Scott Pilgrim Vs. The World.

“And Ice-T would be the antagonist,” suggests Ty. “He’s trying to stop us,” adds Deiondre. “He’s like, ‘Damn the BLACKSTARKIDS, I f-cking hate them BLACKSTARKIDS,’ and then he sends all seven of his bandmates to get us to stop.” But, as everyone will find out, there is no stopping BLACKSTARKIDS.

The year 2021 has been full of self-reflection on the records that have defined music’s past and present. With Puppies Forever, there is now an idea of where music is going, a guiding North Star poised to be as influential as any other landmark album celebrating an anniversary this year.

Though, BLACKSTARKIDS aren’t really into that hype.

When asked how fans in the future – ten, twenty, thirty years from now – might describe the band when inevitably citing BLACKSTARKIDS as influences, Ty just shrugged. “Some kids f-cking around, just doing sh-t,” he said of the band, with a smile. “Just [kids] doing sh-it.”