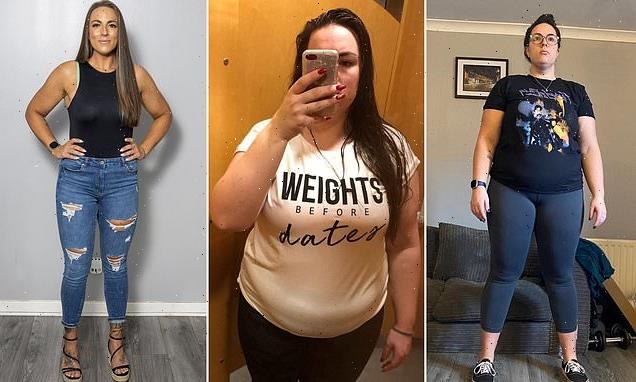 A beautician who gorged on seven takeaways a week has turned her life around and lost 7st in just 18 months.

Sinead McCarthy, 31, from Barrhead, East Renfrewshire, tipped the scales at 20st during the first lockdown and said she felt ‘disgusting’ after eating family-sized chocolate bars every night.

But mother-of-one Sinead was desperate to make a change and joined up with a coach who has helped her trim down from a size 22 to a 12.

She committed to a diet plan eating 1,700 calories a day, began weightlifting in the gym, and has now transformed her life.

At her heaviest, Sinead (pictured) weighed 22 stone, left, which was largely down to gorging on take-aways and family-sized chocolate bars. Right, The beautician, of Barrhead, East Renfrewshire, Scotland says her transformation has helped her leave her unhappy life behind 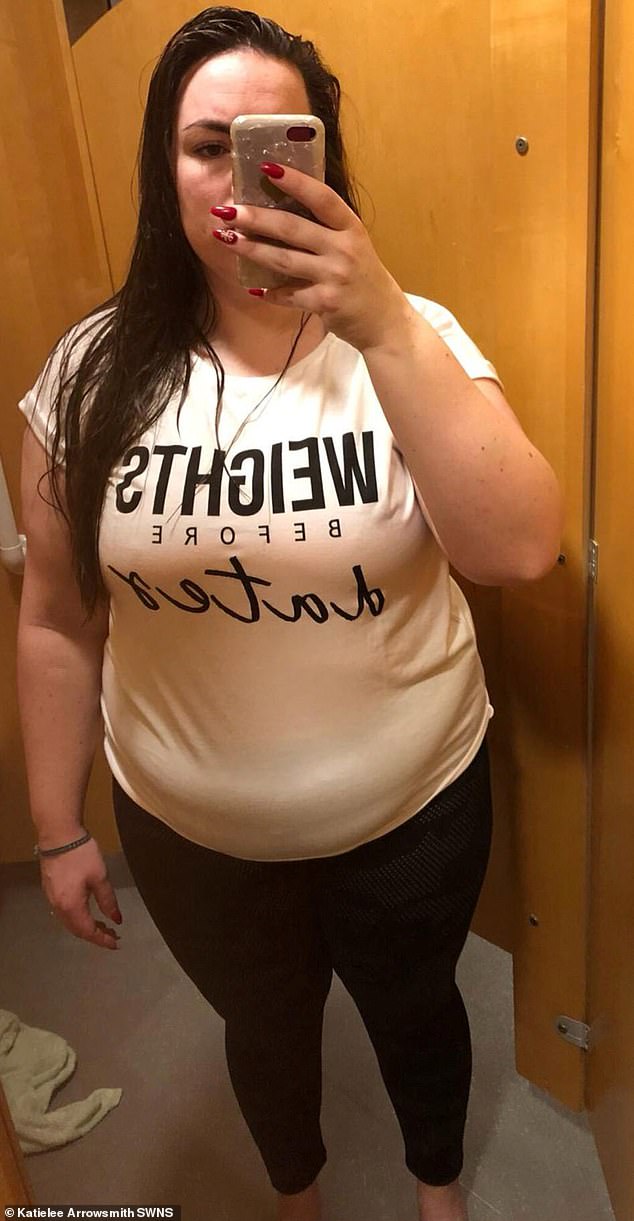 Sinead (pictured taking a selfie in January 2021) felt so enormous and ugly, she refused to look in mirrors and took no pride in her appearance

Lunch – McDonald’s or KFC with enough for 2 people

Self-employed Sinead said: ‘The weight piled on gradually for a few years, I didn’t really see how bad it was until it was too late.

‘I was having loads of takeaways, at least five a week but sometimes seven, and they were enough to two people.

‘My snacking was out of control too, I wouldn’t eat normal sized chocolate bars it would have the big family sized ones.’

She added that she felt ‘disgusting’ and very unhappy with her appearance.

She would also avoid mirrors and refused to have her hair done or wear make-up because she didn’t see the point.

Sinead felt so low about herself when she was obese, refusing to do her hair, apply make-up or take any self-care. Pictured, in January 2021, at a size 20

Sinead said she could never look at herself in a mirror because she hated how she looked so much. Pictured, in 2021, at a size 20. Right: a size 12 today

Yet – despite her difficulties – 18 months ago, Sinead began taking steps to transform her life.

She said: ‘I started out with a personal trainer at the gym and then I signed up for a coach who wrote a programme for me in the gym and a nutritional plan.

‘I do weightlifting in the gym nearly seven days a week now and make sure to get some cardio done too.

‘The first workout I did was horrific, two minutes in I thought I was going to pass out and had to sit down, it was so hard.

‘But I was determined to get the weight off and change my life.’ 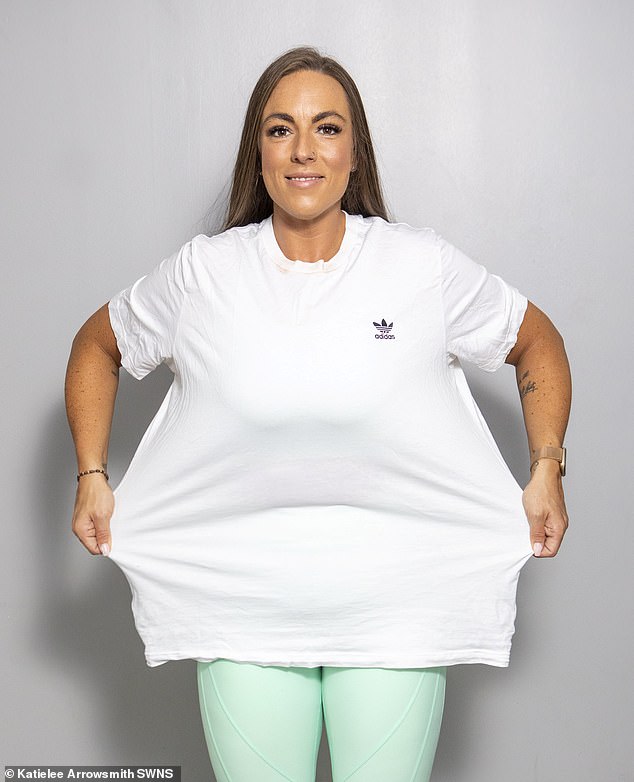 Her old clothes no longer fit: Sinead had to buy a whole new wardrobe to fit her once she lost the seven stone in 18 months 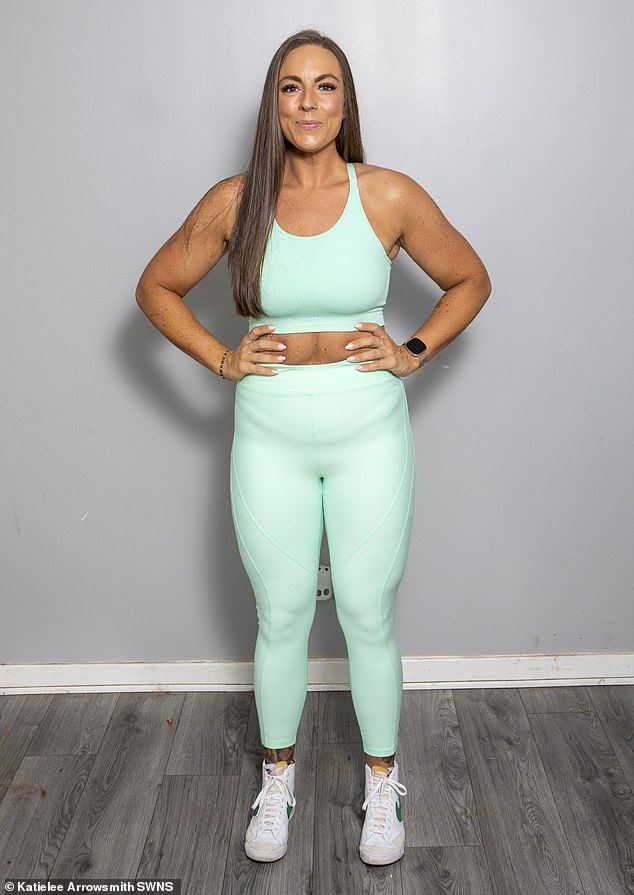 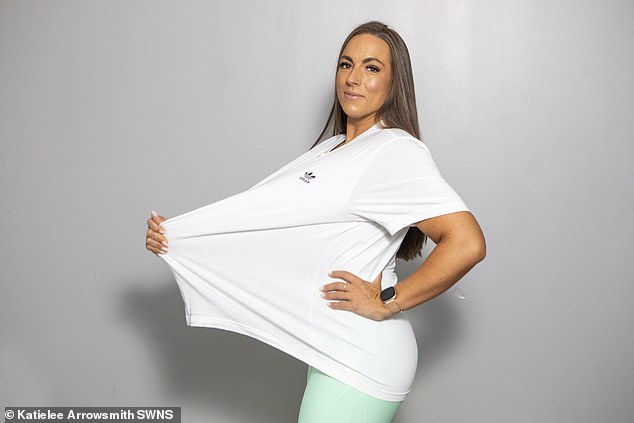 Sinead says: ‘I lost myself for a few years. My friends really noticed and now they say it’s nice to have the real me back.’

Sinead now has a newfound confidence after slimming to down to under 13st.

Instead of take-aways, she now eats protein packed meals and she says going to LIFT Glasgow gym seven days has transformed her life.

‘The gym has become more of a mental thing for me now because it makes me feel so good and sets me up for the day,’ she said.

‘I don’t restrict myself anymore if I want to have a cake I will have one because one cake is not going to ruin all the work I have done.

‘It’s like a physical and mental weight has been lifted off me now. I wake up glad to be here now, before it was such a struggle getting up every day.

‘I lost myself for a few years, all my friends really noticed it and now they will say it’s so nice to have the real me back.

‘It’s been a complete life transformation for me. I feel like I am just starting to live my life now which is incredible. I have a newfound confidence and freedom in my life like never before.’