New details of the trio’s trip emerged on Wednesday – more than 36 hours after Victoria’s public health team began interviewing them – prompting Mr Weimar to express “exceptional frustration” at the men’s lack of transparency. 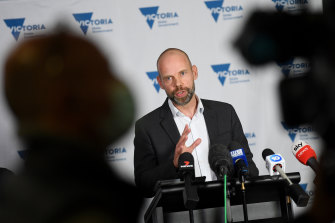 The men arrived in Melbourne on July 8, on a special workers permit for freight drivers to deliver furniture in the City of Hume and pick up another load in the City of Maribyrnong.

Families were at home at both locations and are now isolating. CCTV footage and witness statements revealed the removalists were not wearing masks. The Ariele Apartments in Maribyrnong have been locked down as a result of one of the deliveries. Four people in the building have since tested positive, as well as the elderly parents of one resident.

The drivers breached several permit conditions, including the need to wear a face mask while in Victoria, appropriate record-keeping for contact tracing purposes and “effective self-isolation” where practicable when working and during stops.

On Wednesday Mr Weimar revealed the men had arrived in two trucks and had stopped at a petrol station and fast food outlet in Kalkallo, on Melbourne’s northern fringe, on July 8.

“Books will be thrown when it’s time, when it’s ready to throw them, and I’m exceptionally frustrated at the pace and transparency of information coming from the removalists’ exposure,” Mr Weimar said.

“That’s been a real matter of concern … [and] it is my concern that we haven’t had this quick and transparent exposure of all the information. That’s why we’re talking about Kalkallo now – 24 hours after we started talking about the first sites, which is a source of frustration to all of us.”

Mr Weimar reiterated his calls for people who arrive on red-zone permits to isolate for 14 days regardless of their COVID-19 test results, after a member of a Hume family who arrived on a permit from Sydney visited a supermarket and petrol station during their quarantine period. 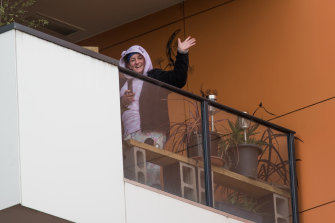 The Ariele Apartments in Maribyrnong are in lockdown after being visited by the three Sydney removalists.Credit:Jason South

A man in his 30s who visited the supermarket has since tested positive for coronavirus.

Mr Weimar said the family would not be fined because they had been forthcoming with information about their movements.

The removalists, on their way to Adelaide on July 9, stopped at a Ballan petrol station and fast food outlet to take a shower, and remained there for more than two hours – in direct breach of permit conditions, which allow people to take only brief stops where absolutely necessary. CCTV footage revealed the men were still not wearing masks.

“We’ve got access to as much data as we’re going to get,” Mr Weimar said. “Many operators have various other recording systems on their vehicles … it would appear the vehicles concerned, when we finally got more information from the operator, don’t have those recording systems.”

Victoria Police was contacted for comment but was unable to confirm whether or not it had been called in to investigate the removalists’ movements.

Penalties for people caught flouting COVID-19 restrictions include $1652 fines for breaching public health guidelines and fines of $4957 for those who fail to self-isolate or enter the state from a red zone without an exemption. Those who provide misleading information on permit or exemption applications also face fines of $1652.