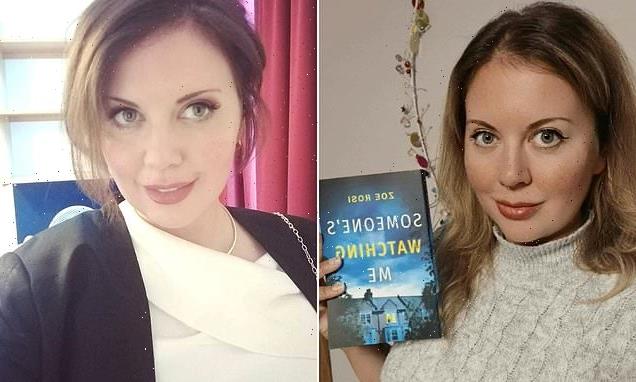 An author has shared how a Tinder date in 2018 left her feeling ‘like a worthless person’ after her drink was spiked and she was raped.

Zoe Rosi opened up about the confusion she felt in the immediate aftermath, and how hazy recollections made it easy to blame herself – but writing her new book has helped her explore the pain in a ‘creative outlet’.

The novelist from Greenwich, 36, revealed that the perpetrator had also acted like the pair simply had a ‘one night stand’ – and even texted her a few times afterwards.

By the time she came to terms with the horrific events, Zoe said it was too late to take legal action because she had washed off the DNA. 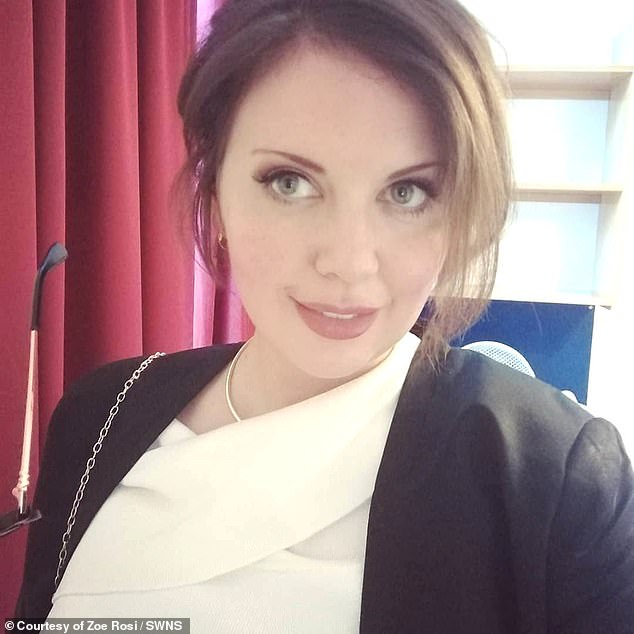 She added that he seemed ‘a cut above your average guy’ at first when they matched on Tinder.

Over text he told her he’d read her books, and seemed ‘humble and normal’ – apart from some gym selfies that made him ‘look a bit vain.’

The pair met in a pub in Woolwich, southeast London. After just one glass of wine Zoe nipped to the bathroom, leaving her drink with him on the table while he bought another round.

During the second drink, she began to feel ‘really, really drunk and out of it’ – which was out of character, as she can normally drink a few glasses without feeling that drunk.

As things began to get increasingly blurry for Zoe, the perpetrator asked her if she wanted to get fresh air. 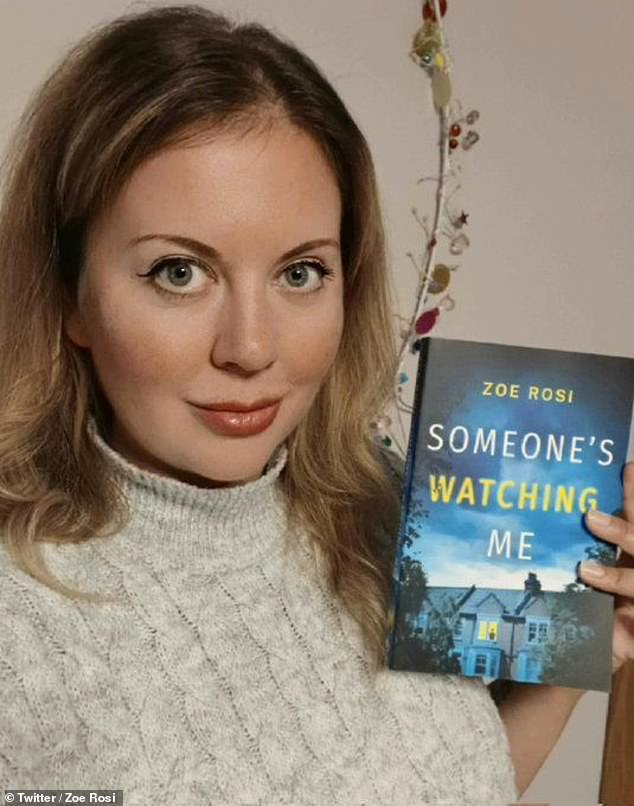 Her memory blanked – next thing she knew she was in a taxi and he was offering the taxi driver cash.

Fleetingly she thought this was bizarre because people rarely carry cash, and potentially indicated the events were premeditated.

Zoe said he was acting as if he was taking care of her because she was drunk.

The last thing she remembers is them being in her bedroom before she woke up the next day with him in her bed, them both naked, and feeling as if they’d had sex. 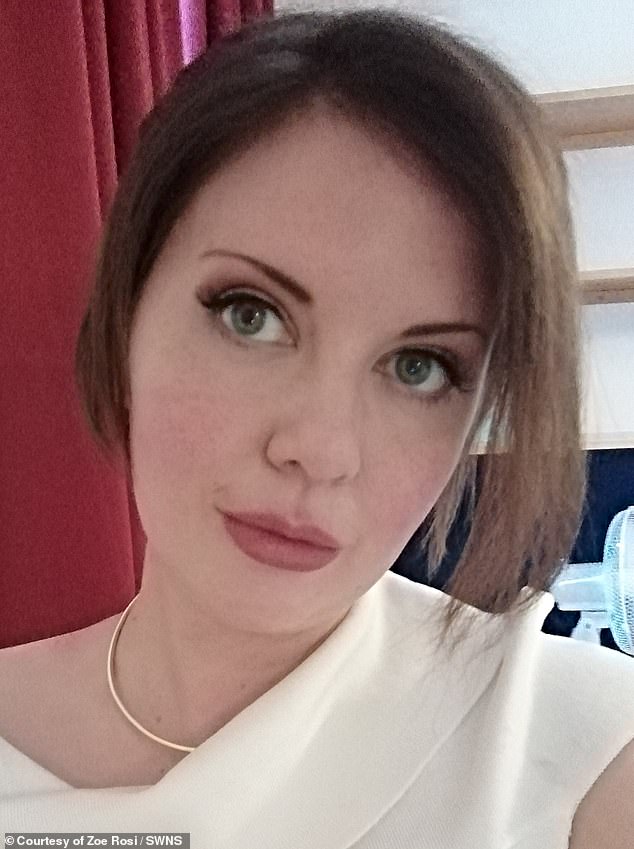 The novelist from Greenwich, 36, revealed that the perpetrator had also acted like the pair simply had a ‘one night stand’ – and even texted her a few times afterwards

‘I woke up the next morning, and he was just like lying next to me,’ she said. ‘I knew we’d had sex, we were both naked, and I just remember thinking what the hell happened?

‘I felt this horrible dark feeling inside, like something was really wrong.’

The author said she rushed to blame herself, thinking that ‘maybe she just got too drunk, and maybe it’s her fault’, despite knowing that she couldn’t have consented in the state she was in. 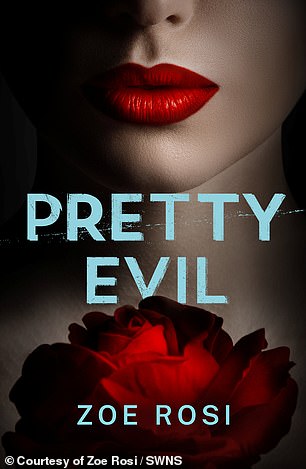 Zoe Rosi opened up about the confusion she felt in the immediate aftermath, and how hazy recollections made it easy to blame herself – but writing her new book has helped her explore the pain in a ‘creative outlet’

‘And so that’s why I was feeling quite guilty and bad about it,’ Zoe explained. ‘I knew something was wrong, seriously wrong, but I didn’t want to admit it.’

The writer said she also didn’t want to think that she had been raped – ‘because that is really traumatic’.

She continued: ‘He was acting like we just had a one night stand, he was just a bit sheepish and got up and left quickly.

‘I was lying there with this horrible, foreboding feeling that I knew what happened was wrong.’

Zoe reached out to some friends, but found that it was easy to have her traumatic experience normalised.

‘I texted an older male friend from work about what happened, who’s from a different generation, and he replied saying you haven’t done anything thousands of other women do on a Saturday night,’ she said. ‘So I thought to myself, ‘maybe it’s normal’ but looking back that was such a misogynistic thing to say.’

She tried to put the events behind her, but eventually began ‘feeling really violated, and really low’.

‘My self esteem went down a lot because I thought I’m just a worthless person who no one respects and men can just use,’ Zoe admitted. ‘I thought, to men I am just a piece of meat.’

She added: ‘The guy texted me a few times afterwards, not asking to meet up but acting everything was normal, so I replied like that.

‘After around a few months I started to realise that really wasn’t right, but by that point I had no DNA because I’d washed it all off, and only some texts that looked like a one night stand.’

While Zoe eventually briefly spoke about the incident with police – who said they could take a witness statement – she claims she was told they couldn’t take things further ‘because the Crown Prosecution Service wouldn’t do anything’.

She tried going back on Tinder a few times after the incident, but each time felt like ‘lamb to the slaughter’.

‘It was like self-harm,’ she said. ‘There’s a lot of dodgy guys on there, they’ll just act like they’re on Uber Eats and they’re ordering a pizza and ask you to come over to their place for a hook-up – you don’t even know me, why would I do that?’

Zoe admitted that the experience made her ‘lose faith in men for a long time’.

‘I would be very careful,’ she warned. ‘I think people should be friends before they become anything else because people can be a persona to get what they want.

‘I now think it’s a good thing to have a daytime date, without alcohol, just a coffee and a walk, and if a guy is decent and actually wants to get to know you he would be totally fine with that.

‘If you’re talking to a predator, they probably won’t have the patience for that.’

Zoe has found that writing her novel – a book about a Me Too serial killer hunting sexual predators – has also helped her recovery.

In a mire of depression and unable to pursue legal justice, the writer created an empowered fashion editor who moonlights as a vigilante murdering rapists, paedophiles and abusers.

Writing the novel Pretty Evil, for which TV rights are now optioned, was a therapeutic outlet to the date rape.

Around three months after the event that left her feeling violated, depressed and destroyed her self-esteem – Zoe began to write.

In Pretty Evil, due to be published January 17, her protagonist’s first kill is based on her experience.

In the book, Camilla Black sets up a date with Julian Taylor – not the alleged rapist’s name in real life – after tracking him down on Tinder when she learned a judge let him off for beating up his girlfriend.

During the evening, he tries to spike her drink – but Camilla realises and retaliates with the same strategy.

The date closes with Camilla firing a crossbow at Taylor who is bound to a post on the rooftop of a derelict council estate ‘like a Saint Sebastian-type scene’.

While writing, Zoe described feeling ‘almost possessed’ because she was so in the zone.

To prevent it becoming a ‘popcorn thriller’ she would at times call ex-senior police detective Stuart Gibbon to help check Camilla could legitimately get away with the murders.

To add to the research, Zoe ordered a large stack of vintage and out-of-print true crime magazines, detailing how villains were brought to justice.

Before Pretty Evil, she had written four romance novels, published with HarperCollins, but said she has never written anything like this book.

‘I felt down at myself, defeated, angry and frustrated because I realised there was nothing I could do to gain justice, then bizarrely this character just arrived in my imagination,’ she said. ‘She arrived fully formed, and was this powerful, sassy, clever, confident woman – completely not how I was feeling at the time.

‘She kills predatory men who evade justice by not being caught by the police or not being sent to prison, or who get out early for good behaviour.

‘She doesn’t feel that’s good enough, so she kills these rapists, abusers, paedophiles and creeps, even using Tinder to track some of them down.’

Zoe continued: ‘For some reason I lit candles while I was writing, it sounds so pretentious, and I would just write – I wasn’t going between Word and Twitter like I often do.

‘I know writing stuff like that sounds a bit crazy, but writing it really did help.’

Zoe describes her protagonist as ‘the Dexter of predators’, with ‘her own moral code and her own standards for who she kills’.

‘She wouldn’t kill just anyone,’ the author said. ‘It has to be somebody who’s done something really terrible.

‘I wanted it to take itself seriously, and not just be a trashy book – I wanted it to seem realistic she got away with everything.’

The novelist said she felt fortunate she could use writing as an outlet to process what was done to her.

‘I think I’m very lucky because I write and I’m creative, when something difficult happens to me I use it as material, and I really feel for people who don’t have that outlet.

‘It’s very easy to internalise a lot of pain and shame about rape and sexual assault, for a while I didn’t feel like myself at all.’

Daisy was conceived after her mother was raped at 13 and it’s shaped her whole life. So why doesn’t the law recognise HER as a victim?

EXCLUSIVE ‘I battled in silence’: Raye sang about struggle with substance abuse and assault ‘to process her trauma’ and her closest friends didn’t know until hearing her new music