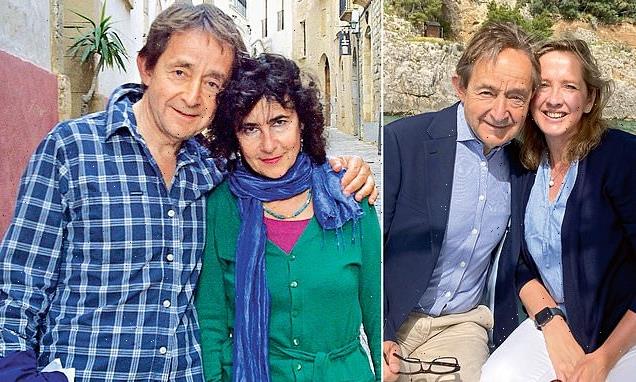 At my age, could I learn to love again? Writer SIR ANTHONY SELDON, 69, tells Liz Hoggard how he navigated the toughest decision of his life after losing his beloved wife

Two years ago, the writer and historian Sir Anthony Seldon was at an emotional crossroads. He had no home, no job, no wife.

He was also on the brink of a new long-term relationship, with a woman 15 years younger. But at nearly 70, did he deserve to be happy again?

After his beloved wife of 34 years, Joanna, 62, died of cancer in December 2016, Anthony threw himself into work (he’s written more than 35 books, including award-winning biographies of Sir Tony Blair and David Cameron). Grief-stricken, he cleared out two wardrobes of Joanna’s clothes, including her wedding dress. ‘It was very hard, as it is for anyone who loses the rock of their life. Her death ripped me in two.’

Anthony and Joanna had met at Oxford (‘I came across this spectacular dark-eyed, ferociously intelligent and beautiful girl’), married in 1982 and had three children, Jessica, Susannah and Adam, now adults. Anthony’s career – as a headmaster – took precedence over Joanna’s. ‘She would probably have preferred a husband who wasn’t a workaholic,’ he says ruefully. ‘It wasn’t always easy but I loved her very deeply.’

She was his emotional sounding board, helping him regulate what he calls his ‘inner weather’. He had only to look at her to know if he was talking or drinking too much. 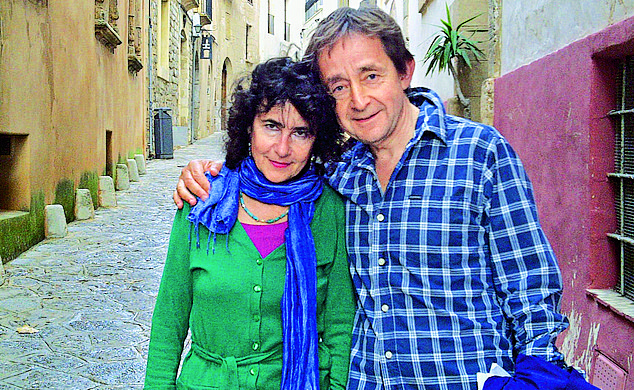 Anthony with Joanna, whom he met at university – they married in 1982. After his beloved wife of 34 years, Joanna, 62, died of cancer in December 2016, Anthony threw himself into work

During the last five-and-a-half years of her life, Joanna spent a lot of time in hospital, in chronic pain. Anthony became her primary carer. Those years, he says, were like falling in love again. They had even talked about him remarrying: ‘Not much, because it was too painful… it was predicated on her dying. We danced around it but she wanted me to remarry. She didn’t feel jealous.’ Joanna was a hard act to follow. ‘Everything pointed towards [remarrying] so I had to find someone who I could equally believe in ‒ just as I believed in her.’

A handsome, sensitive man, Anthony is in demand everywhere from 10 Downing Street (he is their honorary historical adviser) to literary festivals. However, he says openly: ‘I have always battled with depression and abandonment. Joanna’s illness and loss stirred up a very deep sense of isolation. I’m not someone who thrives on their own.’

Friends would invite him for dinner parties with eligible women (‘There would be couples and one spare person,’ he says). He knew that a life partner would make him happy again, but dating seemed impossible. ‘To find yourself back on a market you hadn’t been at since university was weird.’

But then in the summer of 2017 he reconnected with Sarah Sayer, now 53, a teaching friend of his and Joanna’s.

‘Joanna and I first met Sarah at the boarding school Wellington College where I was then head, and she was an assiduous, dedicated French teacher. When she left we lost touch.’ Sarah’s 20-year marriage had broken up and she and Anthony started seeing each other. He found himself drawn to her warmth and vivacity. They went for long walks along the Thames. He says, ‘We liked the same things ‒ the sea, rivers, dogs, films. Faith is very important to Sarah, as it is to me. So that was another bond. Bit by bit, we became closer.

‘Sarah met the children. The fact that she knew their mum, and they could talk about that when it came up, was really important.’ Though, he adds, ‘I knew I couldn’t be happy if the children weren’t; I couldn’t prioritise my own happiness above them. It wouldn’t have any meaning.’

He and Sarah took things gently but by 2019 both knew it was becoming serious. He talks delicately about how they didn’t share a bedroom during their courtship. ‘As the sort of Christian she is, it was very clear there would be no sleeping together until married. It was less fundamental to my own faith, but I respected that and, therefore, understood the added significance of marriage.’

At the same time as his relationship with Sarah blossomed, Anthony was going through a crisis. After nine years at Wellington he had become vice-chancellor at the University of Buckingham but found it hard to lead an organisation without Joanna at his side. After suffering from shingles and pneumonia, he knew things needed to change. He quit the role in October 2020, feeling a failure. He lost the comfortable grace-and-favour house that went with it.

‘New waves of the realisation of losing Joanna hit home in the echoing chambers of the free time I now had,’ he writes in his poignant new memoir. He also knew he owed Sarah the chance to be her own woman. He had effectively grown up with Joanna ‒ ‘sometimes I didn’t know where she ended and I began’ ‒ but love is different in later life. 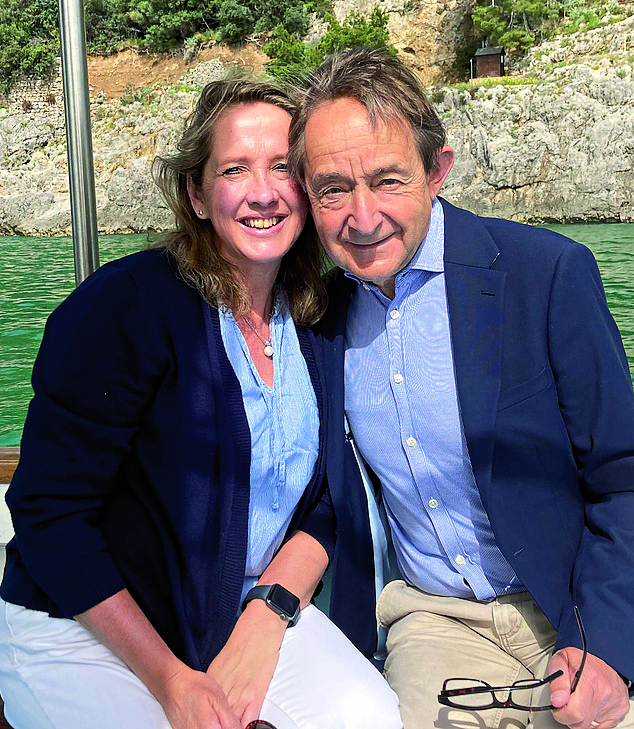 Sarah and Anthony honeymooned on the Amalfi coast earlier this year. On Saturday 2 April 2022, he and Sarah married at St Michael’s Church in Bray, Berkshire, by the Thames

‘The new person can’t be the old person,’ he says. ‘If one is honest, because we are such creatures of habit, one does unconsciously transpose the old relationship on to the new relationship. Part of learning to move on is to recognise this.’

Homeless and jobless, he needed a new project. So he took on a 1,000km walk from the French-Swiss border to the English Channel, tracing the route of The Western Front. This 35-day pilgrimage would, he hoped, enable him to reach clarity in his life and give him time to heal and think about Joanna. He felt deeply for Sarah. But was he taking things too quickly? After all, he hadn’t lived alone since his 20s. The walk would be a chance to test his feelings. ‘Could I move on from Joanna and find new love?’

His departure kept being pushed back because of Covid, but in August 2021, just after his 68th birthday, travel restrictions were eased. It was now or never.

Sarah joined him for the first nine days in Alsace-Lorraine. ‘It made all the difference that she was there at the beginning. It was important for us that she was helping me on a project of such great importance.’

In the evenings he self-medicated with wine, and had troubling dreams ‒ including one where Joanna, perched on a bar stool, told him: ‘I’m still here.’

‘I don’t think death is final,’ he says. ‘That sense of Joanna being present is real, and sometimes that breaks through into sleep.’

Later in August he broke the walk for two days and headed to the Périgord village where his daughter Susie was getting married in the family home that Anthony had bought for Joanna a year before she died (they had honeymooned close by in 1982, and her ashes are scattered there).

Sarah stayed at a nearby pension, along with his old friends. It can’t have been easy to be the ‘new woman’ at the wedding, but he watched as she helped his daughter with arrangements, tactfully working around complex family dynamics. Impressed by her ‘loving warmth and graciousness’ he realised how much he wanted to be with her.

He resumed the walk, finishing on 15 September last year, exhausted but exhilarated. It changed his life, he says. He had learnt he could be on his own. ‘It showed I could do something without Joanna, but also how Sarah was integral to the new me. Who I am and who I need to be, would be affirmed by her.’

He realised that he and Sarah had needed time to grieve for their old relationships: ‘To let them go, to meet the new person in no man’s land out of the trenches.’

On Saturday 2 April 2022, he and Sarah married at St Michael’s Church in Bray, Berkshire, by the Thames. His son was best man, his daughters bridesmaids. ‘That was extraordinarily important.’

Today they live in a charming, book-filled house nearby in Slough, with their dog, Tallie. Sarah teaches at a local junior school. Anthony is still driven ‒ his next book will be an account of Boris Johnson’s time in office.

He insists the age gap isn’t an issue: ‘I believe this will be lifelong, until whichever of us dies first.’ We talk about how mature love is so different ‒ and yet similar – to youthful ardour. ‘When we were younger, we thought only young people have loving relationships,’ Anthony says. ‘But many of the same imperatives are there whether one is 60 or 16. In a way, it’s harder when you’re 60 because one has to unlearn that earlier relationship and let it go. But part of the joy is discovering new life in the present moment. So it has many similarities to youthful love.’

Later he sends me an email, worried that he didn’t sound romantic enough. ‘I love Sarah; a different love, but every bit as deep as the love I had for Joanna.’

Anthony’s new book, The Path of Peace: Walking The Western Front Way, will be published by Atlantic Books, £20, on 3 November*; thewesternfrontway.com