I’m saying goodbye to artist/activist Richard Bell after an entertaining morning chatting with him at the Museum of Contemporary Art, which will soon host a retrospective of his work.

“F–k off!” he shoots back immediately. “You got a whole country for free and now you want me to buy you a beer …”

Bell has always used humour in his work, revelling in being the clown prince of Indigenous activism but at the same time being serious. Deadly serious.

Take the title of this retrospective of 30 years of his art practice: You Can Go Now. The mildness of the phrase — it’s the sort of thing you might say after dressing down a naughty child — is satirically at odds with the brutal reality of more than 200 years of dispossession, displacement and injustice. 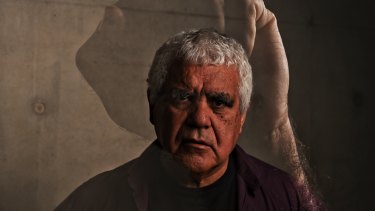 ‘What we have is a goddam disaster’: A double exposure of Richard Bell at the MCA..Credit:Nick Moir

“If people are disarmed by my humour, they actually get to look at that ugly side,” he says. “It exposes what’s been papered over. Humour is my tool.”

But always a sharp-edged tool — like the time in 2011, when he was asked to judge the Art Gallery of NSW’s Sir John Sulman Prize (for a subject, genre or mural work), one of the great bastions of the art establishment.

Bell selected veteran portraitist Peter Smeeth as the winner — then announced he had made his decision by tossing a coin onto a list of eight finalists. He might as well have tossed a hand grenade to the great and the good of the Australian art world. The outrage was as swift as it was predictable.

“I got ’em a winner,” he said at the time. “I would have liked it to be one of my friends. I would have much preferred that. But I gave these other dudes a crack at it.”

Ten years on, he is still deadpanning about the firestorm he started.

“I don’t understand why it was a controversy,” he says. “Why the fuss? I thought I came up with the fairest way of picking a winner.” 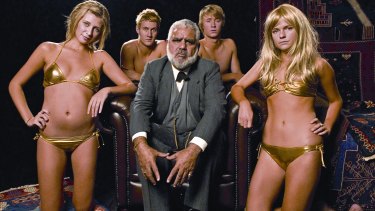 Bell in his provocative video installation, Scratch An Aussie.

More recently, he had his quixotic say on the Venice Biennale when his own application to show there was rejected. After a successful crowdfunding campaign, he created a replica of the Australian pavilion, draped it in chains then mounted it on a barge to sail up and down past the “real” pavilion. He made his point and ruffled plenty of feathers: mission accomplished.

Bell was born in Charleville, central west Queensland, a descendent of the Kamilaroi, Kooma, Jiman and Gurang Gurang people.

“I lived in a tent on the Charleville Aboriginal Reserve for the first two years of my life,” he says. “We had to wait for the white people in town to throw away enough corrugated iron to make a tin shack.”

When he was about six, the family moved to Darwin, where his mother worked in a home for “half-caste” Indigenous children. 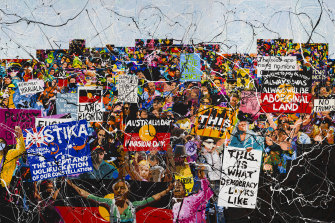 “The home was run by the Aboriginal Inland Mission. Very religious. It was quite traumatic for me having to go to church and twice on Sundays. It was so boring for us kids.

“But we had the advantage of observing them at close hand and we saw how un-Christian they were. There were some good people there but there were some monsters as well.”

The family stayed in Darwin less than a year before moving because the climate was affecting his mother’s health. Eventually, they ended up in Mitchell, a couple of hours east of Charleville.

As Bell grew up, art was not a particularly important part of his life, although his mother was a proficient portrait and landscape painter. 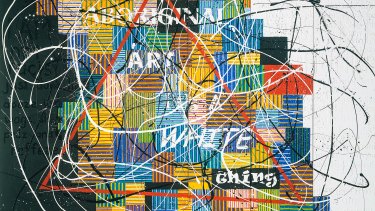 The work with which Bell won the 2003 Telstra National Aboriginal and Torres Strait Islander Art Award.

“I used to draw a bit but I never had any interest in art as a kid,” he says. “My younger brother did. He convinced me to start making tourist art. That was short-lived. It’s very hard to make a living out of making boomerangs in this country because they can import a boomerang from Indonesia or China for a quarter of what it would cost us just to make one, let alone decorate it.”

But the seed had been sown and a couple of decades later he “just fell into art”.

“A white guy came up to me one day and said ‘why don’t you get into fine art’,” he says.

Bell was particularly intrigued by the notion that as an artist he could do and say things that would otherwise “get him arrested”. It turned out to be just enough encouragement to awaken the artist within and set him on the path to being a full-time artist. Or should that be activist? 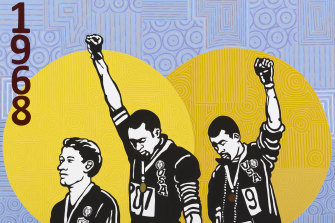 “I’ve settled on describing myself as an activist who masquerades as an artist,” he says.

So who was that “white guy” that provided the inspiration? He won’t say.

“It’s really important that the white guys stay unnamed. There are so many points in history that there are unnamed black people. I’m going to tick up one for the blackfellas.”

His mind made up, Bell set about educating himself about all aspects of art — from the technicalities of making work to art history and philosophy.

“I’d find people who I thought knew about art and I would take them to dinner or cook a meal for them and I’d pump them for information about art,” he says. “I didn’t want to go to art college. I took the short cut. I paid them with alcohol and occasionally some drugs. I still like to talk to people about art. I’m still learning. It’s impossible to know everything.”

In 2003 Bell won the Telstra National Aboriginal and Torres Strait Islander Art Award with his work Scientia E Metaphysica (Bell’s Theorem), which features the text: “Aboriginal Art – It’s a White Thing”. At the same time, he published a 5000-word treatise, laying out his argument that Aboriginal art exists only as a construct of the white art establishment.

“There is no Aboriginal Art Industry,” he wrote. “There is, however, an industry that caters for Aboriginal Art. The key players in that industry are not Aboriginal. They are mostly White people whose areas of expertise are in the fields of Anthropology and ‘Western Art’.” 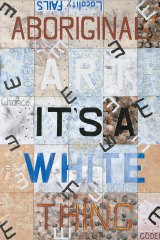 Famously, Bell accepted the award wearing a t-shirt bearing the legend, “White girls can’t hump”, touching off another predictable round of criticism and controversy.

Now 67, Bell admits he is tired of pushing back but insists the fire burns as brightly as ever, stoked by the almost daily indignities and micro-aggressions to which he is subjected as an Indigenous man.

Recently he was in a taxi in Brisbane after a night out drinking with friends.

“We got drunk — really drunk,” he says. “When I got to my place I paid and then looked at the receipt and it said $49. It should have been $12 or something. He only did that because I’m a blackfella.

“I can become a bit blase about it I suppose. Just go ‘f–k, not again’, shake my head and dust myself off. But it is exhausting. It’s stressful just being Aboriginal in this country. Preparation has been made to unwelcome us. We’re continually dispossessed. The machine acts and re-enacts. These things just keep recurring.”

He’s tired as well of what he calls the “Australian dance” in which white people “ask us what we want while measuring what they are prepared to give”.

So what will it take to stop that dance? For Bell, it requires nothing less than a complete re-imagining of the relationship between First Nations people and their colonisers, or, as he puts it with deliberate understatement, a “casual reset”.

“I know nothing ever happens without it being imagined first,” he says. “In my imaginings, I think we need a reset. We need to reset this whole thing. What we have is a goddamn disaster. We’re being gutted by people who should never be in that position. I think we need to start with a new constitution for a new republic. More than just a treaty. A treaty would just disappear in capitalist smoke.

“The Australian position is rooted in 1901. That’s how long ago that constitution was written. It was written for those times. These are new times. We need a reset. F–k them insisting that it’s God’s word or something.” 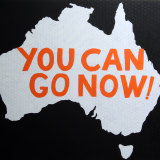 Bell delivers his uncompromising prescription in such a matter-of-fact fashion that it leaves no room for disagreement. What is there to disagree with, anyway?

I’m curious to know what he thinks about the modern concept of white “allyship”? What can those of us who enjoy white privilege do to help move things along?

Maybe he’s joking but I suspect not.

Richard Bell: You Can Go Now opens at the Museum of Contemporary Art, Sydney, from June 4 until August 29.