Arizona State’s home game against California on Saturday has been canceled because of several positive COVID-19 tests among Arizona State’s players and coaching staff, including head coach Herm Edwards. The school said Friday that the positive tests put the football team below 53 available scholarship players, which is the minimum allowed according to the league’s cancellation policy.

“The cancellation of a game is very difficult to accept for all of us, but it is the right decision under the circumstances,” Arizona State athletic director Ray Anderson said in a statement. “In every case we continue to consider the health, safety and welfare of our student-athletes as our number one priority.”

The Pac-12 said the game will be declared a no contest. It’s Arizona State’s first cancellation of the year. The Sun Devils lost to USC 28-27 last weekend.

The 66-year-old Edwards said in a statement that he and his family are fine and encouraged fans to take the virus seriously.

“As I’ve stated many times over, the health, safety and well-being of our student-athletes is absolutely paramount and we will not put them at risk,” Edwards said. “Our team has worked extremely hard to get to this point, and even played a game last weekend. We will continue to care for our students-athletes and follow all protocols very thoroughly as we prepare for our next game. Our team and coaching staff are disappointed, but we do understand what we are dealing with.” 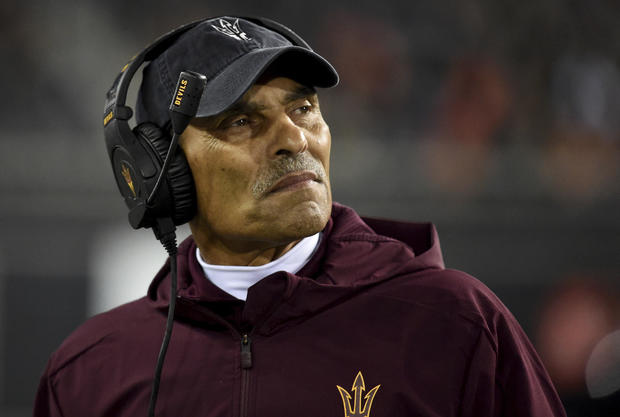 Cal still hasn’t played a game this season. The Golden Bears’ opener against Washington last weekend was also canceled because they couldn’t field a competitive team given the significant number of players affected by the process of contact tracing, coach Justin Wilcox said. The Golden Bears have just four games remaining on their schedule.

Also on Friday, No. 15 Coastal Carolina’s game against Troy was canceled because of a “combination of positive COVID-19 tests and injuries to a specific position group within the Troy football program.” The school said the two teams and the Sun Belt Conference are working to reschedule the game at a later date.

So far, 60 games between schools in the Football Bowl Subdivision have been canceled or postponed because of the pandemic since late August – and 13 this week.

The Ivy League also announced Thursday that it would become the first Division I conference this year to cancel all winter sports, including men’s and women’s basketball.

The news comes as coronavirus cases are soaring across the U.S. Newly confirmed cases per day in the U.S. have rocketed more than 70% over the past two weeks, reaching an average of about 127,000 as of Thursday – the highest on record. And the number of people hospitalized with the virus hit an all-time high of more than 65,000.