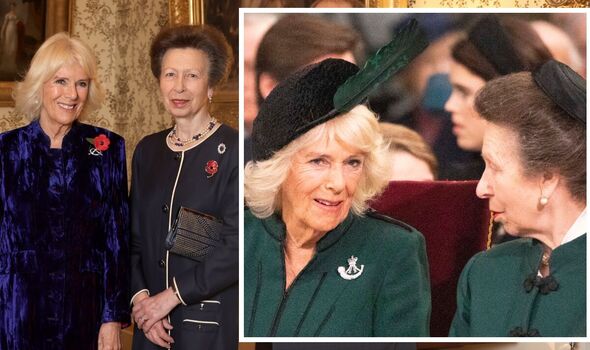 Queen Camilla, 75, was previously married to Andrew Parker Bowles, 83, from 1973 until 1995, and together they share two children, Tom Parker Bowles, 48, and Laura Lopes, 45. Prior to that marriage, however, Andrew was romantically linked to Princess Anne, 72.

Andrew and Anne had much in common – not least their shared love of horses. It’s thought that the pair dated for some time, beginning in June 1970.

However, according to reports, the relationship could not become that serious because Andrew was a Catholic, making any potential marriage highly unlikely. While their relationship came to an end, Anne and Andrew remain on excellent terms – so much so that Andrew is a godfather to Anne’s daughter, Zara Tindall.

They often reunite at horse racing events, too – and both seemed in high spirits as they chatted together just last year at Royal Ascot. Andrew also has a good relationship with his ex-wife and was among the invitees at King Charles and Camilla’s wedding in April 2005.

What is Anne’s body language like with the current Queen Consort?

Judi James, a professional body language expert claimed: “These two women share history with Anne once rumoured to be in a relationship with Camilla’s husband, making the whole Charles/Camilla/Anne/Andrew Parker-Bowles dynamic rather racy and the relationships between each of the four people involved a possible minefield.

“Anne is still very strong friends with Andrew though, while Camilla famously married her Prince who became King. As a result, we have two women with a lot in common but also a pile of potential in terms of resentment and rifts.

“Possibly the greatest problem could have been one of status. When Camilla married Charles she leap-frogged from mistress to the Queen Consort, which might not have sat kindly with Anne who could in turn still have been viewed as that ‘other woman’ by her new sister-in-law.

“Earlier photos do suggest a potential for frostiness between Anne and Camilla with both women apparently able to stand together while ignoring one another. Anne is seen holding an umbrella over herself rather than offering cover to Camilla and even, apparently, holding the brolly close enough for drips to land on Camilla’s hat.

“There were few if any poses of the two women chatting or even looking relaxed together, although this might not have been too unexpected from Anne who has been rumoured to be less than tolerant with some of the newer members of the royal firm.”

According to Judi, the two women have developed a “strong rapport” since their alleged “frostiness”.

She explained: “With time and age though, the suggestion is that there has been a thawing between the two women and their body language now shows signs of quite strong rapport and even friendship.

“Camilla’s non-verbal signals in public often suggest existing levels of social anxiety but she tends to look quite relaxed and animated with Anne, using gestures that suggest she is comfortable instigating some of the jokes they appear to be sharing, including some close-quarters face-gazing to register her thoughts.

“Their mutual laughter goes beyond what would be expected if there were some animosity or frostiness now. If they were putting on a show for the cameras a few moments of polite conversation would have been all that would have been necessary but their body language rituals together involve eye contact and some very empathetic-looking touch, with Camilla even holding Anne’s wrist as though keen to encourage her to stay and chat longer.

“These two women share a love of horses and, famously, a taste in men, with the result being that they appear to have become quite close friends over the years, sending out body language signals of a rather mature and affectionate relationship when they appear together in public.

“Their signals go beyond what would be required to be polite, with some continuation or prolonging signals suggesting they would like to be able to spend more time together, rather than just performing the cursory greeting rituals.”

The two women sat side-by-side at the memorial service for Prince Philip in 2022, and Judi commented on their dynamic.

She opined: “Camilla rarely looks totally relaxed in public but her body language with Anne at the memorial service did seem to show her at her confident best, suggesting she feels Anne is something of a supporter and protector.

“Her elbows both rested on the arms of her chair, meaning she performed a splay gesture at a formal event, rather than self-diminishing as she regularly tends to. She also appeared to be the one leading the chat and her eye gaze and smile suggested she was keen to do some quick catching up.

“But even before this the women’s greeting and chatting rituals have suggested friendship and, as well as some mirrored poses and even outfits, Anne can be seen bending quite low to plant a kiss of hello on Camilla’s cheek, while holding her hand out with the palm pointing up to clasp Camilla’s wrist and hand to prolong the touch while doing so.

“The signals of relaxation from Camilla seem to have peaked though, possibly as a result of her becoming the Queen Consort. Prior to the memorial service, we can see small signs of inner tension as she stands listening to Anne despite her keenness, like her signature thumb-twiddle.”