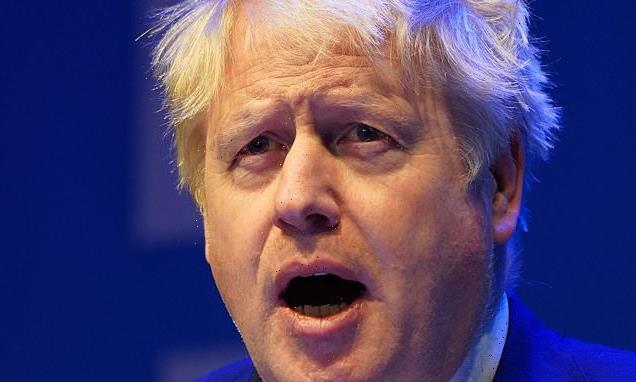 The Prime Minister received a victor’s welcome from Tory Party donors in the ballroom at Claridge’s on Thursday night.

They were treated to a bombastic speech by Boris, which included a joke that ‘Labour would want the Army to be gender neutral’.

As well as mentioning the Ukraine war, the PM talked about having ‘got through’ Covid and urged his moneymen to book a fourth vaccine.

My spies tell me he heaped praise on Tory co-chairman Ben Elliot, who has been criticised for his luxury concierge firm having had Russian clients. 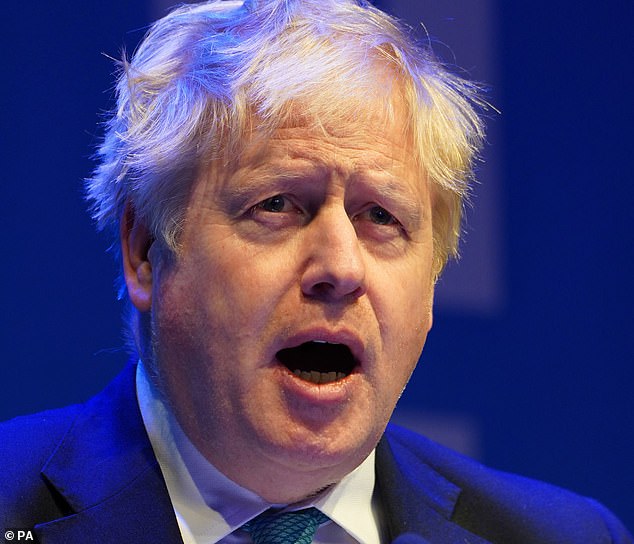 As well as mentioning the Ukraine war, the PM talked about having ‘got through’ Covid and urged his moneymen to book a fourth vaccine

Flanked by Lord (Howard) Leigh, the ex-Tory Treasurer, the PM then hobnobbed with guests, one of whom gave him a tie in Ukrainian colours.

The mood wasn’t dampened by the fact that the first Partygate fines had been issued earlier that day.

Donors downed Laurent-Perrier champagne and canapés while grumbling about the police for ‘taking a huge amount of time’ investigating Downing Street’s breach of lockdown rules.

Behind the bravado was a serious appeal to help save marginal Tory seats. The donors – who included the ‘Leader’s Group’ whose members give at least £50,000 – were tapped up to support MPs with precarious majorities, including Bury North and Stroud. Nervous party chiefs fear that Tory candidates in next month’s local election will be savaged because of the explosion in the cost of living.

The identities of ballroom benefactors was public knowledge until the Tory Party stopped publishing its list of Leader’s Group members in 2018.

For the past two years it has promised to restart publishing them ‘in due course’. Yesterday, Labour asked – again – for the identities to be disclosed, this time amid concerns over Putin’s cronies giving money.

Emergency taxpayer funding of £4.2 million propped it up, while its commercial arm sacked many staff. But the pay package of boss Gabriele Finaldi has risen from £210,000 to £240,000, which included a bonus awarded by a committee that counts ex-BBC chief Lord Hall as a member.

He’s no stranger to rewarding public-service execs (and to ignoring calls to resign his peerage after a damning report into the Martin Bashir-Princess Diana scandal).

How gracious of Rishi Sunak to say that, unlike Will Smith at the Oscars, he ‘didn’t get up and slap anybody’ after questions were asked about his wife’s finances.

The Chancellor knows full well that the ministerial code is clear the business interests of spouses of those who run our country are of public interest. Mrs Sunak is a shareholder in tech giant Infosys, co-founded by her father.

Sunak has told businesses to cut ties with Russia, but apparently didn’t see any problem with his wife receiving millions in dividends from a company with a Moscow office and past work with now-sanctioned Russian banks. Infosys has bowed to pressure and just pulled out of the country.

It’s all grossly unfair, cries Sunak, because, unlike him, his wife Akshata is not a public figure. No, but she is also his former business partner. Until he became an MP, Sunak was co-director and co-founder of the venture capital firm she now runs solo.

Those ‘attacking’ the Sunaks are not comedians but journalists, and the Chancellor appeared to seek praise for not going all Will Smith on them. Of course, he’ll know how his boss, Boris, reacted when Old Etonian fraudster pal Darius Guppy told him he wanted to beat up a journalist. The future PM asked Guppy: ‘Uh, how badly are you going to hurt this guy?’ before agreeing to supply the journalist’s address.