When I was an eight-year-old baby nerdling, there was only place I wanted to be at recess: on the edge of the soccer field, where all the girls in my grade who got 100s on their spelling tests gathered to act out Baby-Sitters Club books. Ann M. Martin’s blockbuster middle-grade series had only started five years earlier, in 1986 — which to us third-graders made it basically as old as the Bible. Also like the Bible, The Baby-Sitters Club was our primary moral text, giving us lessons in how to live a good, honorable life: Take your responsibilities seriously! Don’t be a snob! Wear “very baggy lavender plaid overalls” whenever the spirit moves you! And don’t give much thought to Mallory Pike. We took that last lesson to heart the most deeply. Though I recall a physical fight once breaking out over who would place Stacey, there was no rush to pick Mallory. In fact, Mallory was usually assigned to whichever girl got there last. Once, when we were down a girl, we just had an imaginary Mallory. No one really noticed.

This might sound like just another story about a bunch of elementary schoolers being rude and misusing soccer facilities, but I urge you to look at the facts. Because it wasn’t just us third grade girls at Jane Ryan Elementary who felt this way. Mallory Pike is the least popular member of The Baby-Sitters Club across the board. No episode of the BSC TV series is focused on her. Ranker.com places her as #7 the number best Baby-Sitter, just above Logan Bruno — who, I may remind you, was not even a real member! 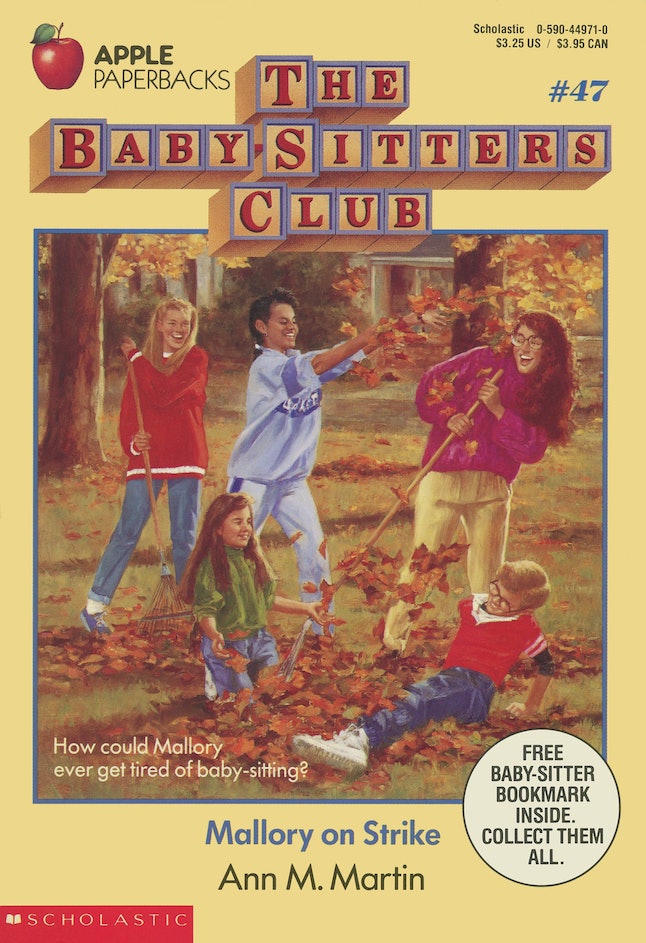 And look at this extremely professional chart I made, comparing Google searches for several Club members:

Poor Mal, eternally living in the shadow of Claudia and Kristy, even on the interwebs!

Kate Williams, author of the forthcoming YA novel The Babysitter Coven, also remembers Mallory being a second fiddle character when she was growing up. Though Williams would take any BSC volume out of the library, she tells Bustle over email that on occasions where she got to go to the bookstore, "I did not waste those precious purchases on a Mallory. I always went for a Claudia or a Stacey, or at the very least a Dawn. I don’t remember having strong feelings against her, it was more just that I was like ‘Mallory? ¯\_(ツ)_/¯’"

Awkward, self-conscious, book-loving Mallory didn’t just fail to make an impact with the BSC readership; she often seemed to be the Baby-Sitter least loved by Ann Martin herself. While all the Baby-Sitters had problems to deal with — Stacey had a chronic illness, Claudia had school troubles and a family who didn’t understand her — Martin subjected Mallory to troubles that were all drudgery and no drama. The oldest of eight (!!) siblings, Mallory’s adventures nearly always hinged on, well, how much it sucked to be Mallory. 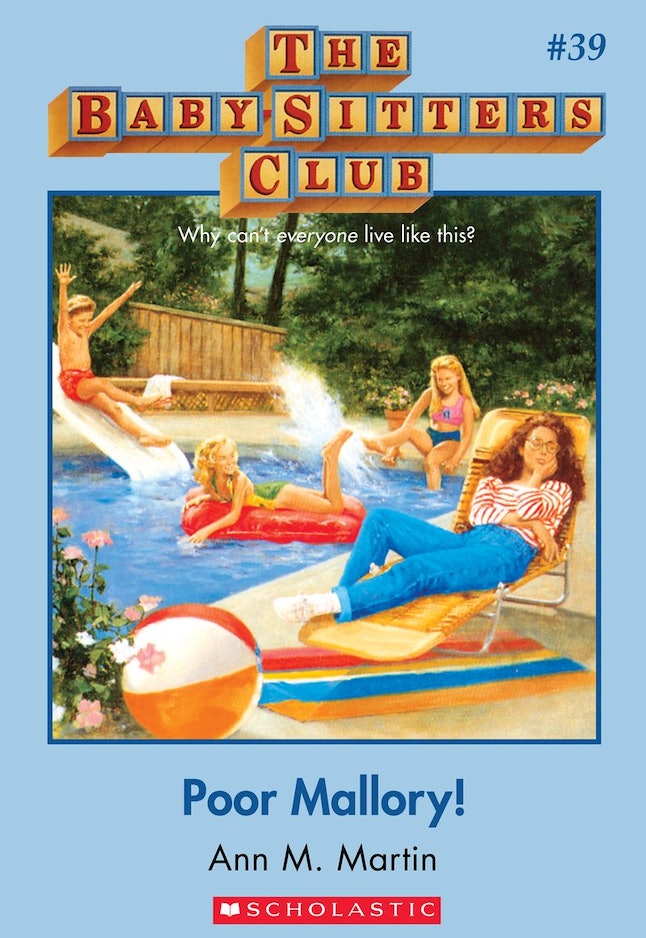 From her very first book, #14: Hello Mallory, Mallory can’t catch a break. The other Sitters basically spend this first book hazing her, making her take a difficult babysitting test, blaming her for an injury a charge sustained, and otherwise giving her a hard time. "I mean, they made her draw a diagram of the digestive system!" says Williams. "Was she supposed to perform emergency surgery if a kid swallowed a button?"

Though Hello Mallory ends with all the other Sitters ultimately letting Mallory and Jessi into the Club, it sets the tone for Mallory’s ongoing role in the books: to suffer. In #39: Poor Mallory, Mallory faces down her family’s financial ruin after her dad gets laid off. In #47: Mallory on Strike, Mallory finally cracks under the weight of all the unpaid work she’s doing for her family. In #59, Mallory Hates Boys (And Gym), Mallory is stressed out about a coed gym class, while in #69: Get Well Soon, Mallory, she comes down with mono, “the kissing disease,” without even getting to kiss Ben Hobart! In #108: Don’t Give Up, Mallory, she is thrilled about being able to take a writing class, but then butts heads with a teacher who seems biased towards the male students. In #126, The All-New Mallory, Mallory is finally able to feel a fleeting moment of happiness… by leaving Stoneybrook Middle School and literally everyone she has ever known behind, for a new life in boarding school. Mallory doesn’t get phantom phone calls or to go wild with some bad girls; she just gets to sit around, feeling self-conscious about her nose, complaining, and having her friends give each other the side eye because they’re all annoyed by how immature she is. "Poor Mallory" is right.

My suspicions that Martin has no love for Mallory were confirmed by a 2010 Entertainment Weekly article where Martin spun future lives for all the babysitters — except for Mallory, about whom she “doesn’t have any ‘strong feelings.’" No strong feelings?? ANN, YOU LITERALLY CREATED HER! THIS IS ON YOU! (her favorite character is Kristy, which should surprise no one).

Fanfiction has imagined the adult Mallory as everything from a sci-fi writer in a romantic triad, to the wealthy CEO of a company that manages daycare for reality TV, to a young mom who dropped out of college following an unplanned pregnancy with Ben Hobart, but each vision (even the positive ones) seems to acknowledge the rough hand Mallory was dealt in the books. As Hortense Smith’s 2010 Jezebel piece notes, “Being pushed around and written as a whiny, pathetic jerk during the formative years of my life forced me to face myself in ways I never thought I would.” 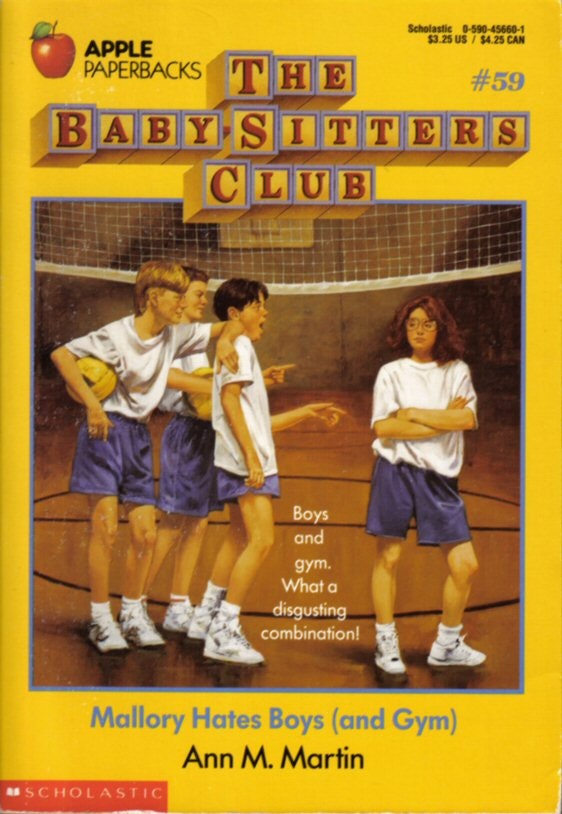 So what’s the deal? Why do we constantly kick around poor Mal? Isn’t her life hard enough? Lily Anderson, author of young adult novel Undead Girl Gang, tells Bustle over email that Mallory is unpopular because she is, well, us: “Mallory (bookish, lost in the crowd, horse lover) reveals the deepest fear of all BSC fans — none of us would be cool enough for our own books. We the audience are all Junior Officers. Slightly younger, slightly less cool Mallory was the audience surrogate no one wanted. (See also my forever fave: Molly from American Girl).”

Williams concurs: "Claudia-Stacey-Kristy-Mary Anne-Dawn was who we wanted to be. Mallory was who we were. She had braces and glasses, and she was 11! Being 11 was horrible. You’re not cute anymore and everyone, even your parents, kind of wishes that you’d just go somewhere and do something by yourself for a while." While the other babysitters have a dash of glamour that made them aspirational for us eight year olds reading them — Jessi was a dancer, Claudia was a fashionable artist, Dawn was involved with important causes, Stacey was from NEW YORK HAVE YOU HEARD OF IT — Mallory was simply a smart kid who felt persecuted by the world. Someone who had no idea what to do with her hair, someone who fell for Emily Dickinson’s poetry early, yet played horses until she was WAY too old. Rooting for Mallory, for most of us, would have meant confronting our present, which was exactly what we were reading to get away from.

Looking back at the BSC now, however, I think Mallory might be the best character. She’s unable to hold back and be anything but her unapologetically real self — even if that self sometimes came with a heaping side of self-loathing (just like it does in real life!). She seems like she’s just a few years, a growth spurt, and a Salvation Army shopping spree away from turning into a Daria-like smartass, someone whose time at the bottom of the social food chain have given her deeper insight into human relationships and a delightfully dark sense of humor. And, as Williams notes, in the intervening decades, we’ve turned into a more Mallory-friendly culture: "I think there’s a lot of latent contemporary love for Mallory out there — Barb on Stranger Things and Yorkie on Black Mirror were both very popular characters of late and hello, redheads with glasses!"

And honestly, as an adult, who would you rather hang out with: Someone who can’t stop talking about how cool things are in New York, or someone who’s gonna talk to you about poetry, horses, and how annoying your family can be? Mallory all the way.