“We’ve only been together for two years,” Anne Edmonds says of her relationship with fellow comedian, Lloyd Langford. “But after the lockdowns in Melbourne, it feels as though we’re about to celebrate our golden anniversary. It’s like we’ve compacted 20 years into four months.”

Speaking via Zoom from their one-bedroom unit, the couple explains the origin of their new live show, Business with Pleasure. Opening in Melbourne on Tuesday – ahead of the launch of the 2021 Melbourne International Comedy Festival on March 24 – it’s a not-too-serious examination of the past 12 months. 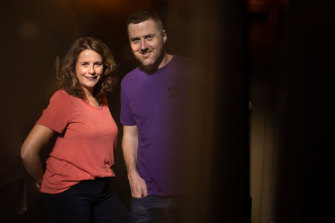 ‘You do love each other more after you’ve been through something like this’: Anne Edmonds on her relationship with fellow comic Lloyd Langford.Credit:Simon Schluter

“We basically went a full year without doing very much [after COVID-19 restrictions came into force],” says Langford, who established his comedy career in Wales before moving to Australia. Stuck in a small apartment in the depths of a Melbourne winter, he and Edmonds – both regulars on Network Ten’s Have You Been Paying Attention? – decided to make the most of their confinement. The result is an on-stage dissection of their relationship, including questions from the audience.

“There’s always a question about our sex life,” says Edmonds, who has performed the show in Sydney and Adelaide. “People also want to know what we’ll do if we break up before the tour has finished.”

Having survived the difficulties of the past year, a split seems unlikely. “You do love each other more after you’ve been through something like this,” Edmonds says.

Of course, the downside of spending every waking minute together is a heightened awareness of each other’s bad habits.

“If one of us says something the other one has a problem with, we can heckle each other.”

“I’m a very loud eater,” Langford says. “When it’s illegal to leave your house, little things like that become amplified.”

“And I have the attention span of a two-year-old,” Edmonds says. “There’s a large spectrum of [behaviours], from performing with a wig on or singing a song to crying on the floor – though I don’t know if you’d call that a bad habit or a personality problem.”

Each acknowledges the potential pitfalls of dating another performer.

“There’s nothing worse than a comedian who refuses to switch off,” says Langford, who also has a solo show called Jazzed in this year’s Comedy Festival. 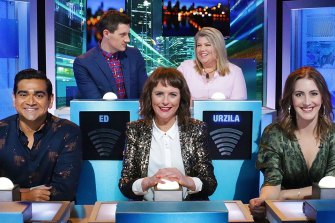 Anne Edmonds, front centre, on Have You Been Paying Attention?Credit:Ten

“I was worried we’d end up talking about nothing but comedy but fortunately, that hasn’t happened,” Edmonds says. “The advantage of having a partner in the industry is that they understand what it’s like to go away for three weeks on tour and leave the other person behind.”

When asked which aspects of their relationship they deemed off-limits in Business with Pleasure, Edmonds laughs.

“Comedians are notoriously shameless,” she says. “When one of us says, ‘I want to talk about this’, not once has the other person disagreed.”

“We each have a microphone for the duration of the show,” Langford adds. “If one of us says something the other one has a problem with, we can heckle each other.”

While living in the UK, Langford received a Radio Academy award for his contribution to sketch series Here Be Dragons. Edmonds has been nominated four times for the Comedy Festival’s most outstanding show award and in 2015, she won the comic’s choice prize.

Winning awards, however, is not what motivates her.

“I’m not a big fan of talking about the craft of comedy and I’m not interested in reviews or any other crap,” she says. “There’s no message in [Business with Pleasure]. All I care about is, ‘Are people coming to have a laugh after everything that happened last year?’”

The Age is a media partner of the Melbourne International Comedy Festival, which runs from March 24 to April 18. Pick up your free copy of the festival program in The Age on Saturday, March 6.