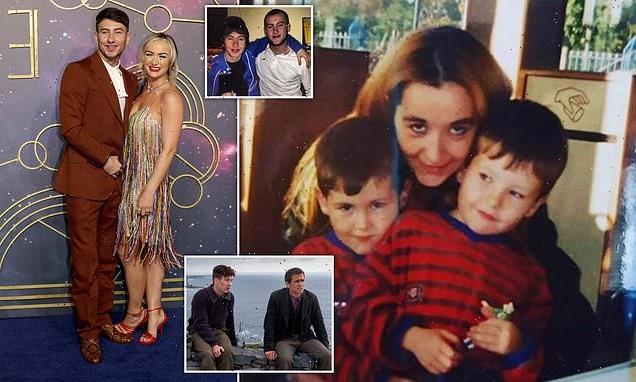 From foster care to Hollywood’s next big thing: How Banshees of Inisherin star Barry Keoghan lost his heroin addict mother aged 12, was kicked out of school plays for ‘messing about’ and is now tipped for an Oscar

He’s on the path to Hollywood glory with numberous blockbuster films and award nominations to his name, but Barry Keoghan’s route to stardom is all the more remarkable given the adversity of his early life.

The 30-year-old Irish actor has played major roles in The Batman, Eternals, American Animals, Dunkirk and Chernobyl, and most recently the Golden Globe winning The Banshees of Inisherin, which has seen him tipped for an Oscar nomination.

It’s an incredible ascent to stardom after growing up in 13 different foster homes because his father was absent and his mnother, who died when he was 12-years-old, was a heroin addict.

After being kicked out of school plays for ‘messing about’, the father-of-one says that acting has helped him overcome some of the trauma of his childhood, after initially pursuing careers in boxing and football. 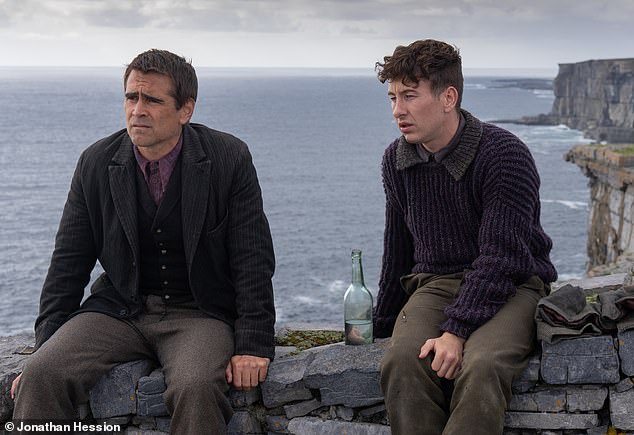 Pictured:  Colin Farrell (left) and Barry Keoghan (right) both starred in the film The Banshees of Inisherin

But success and stardom did not come on a plate to Keoghan, who has fought through a quagmire of personal battles.

Growing up in Summerhill, in the beating heart of Dublin, the young Irishman had an exceptionally difficult upbringing.

His mother was a heroin addict and very little is known about his father. 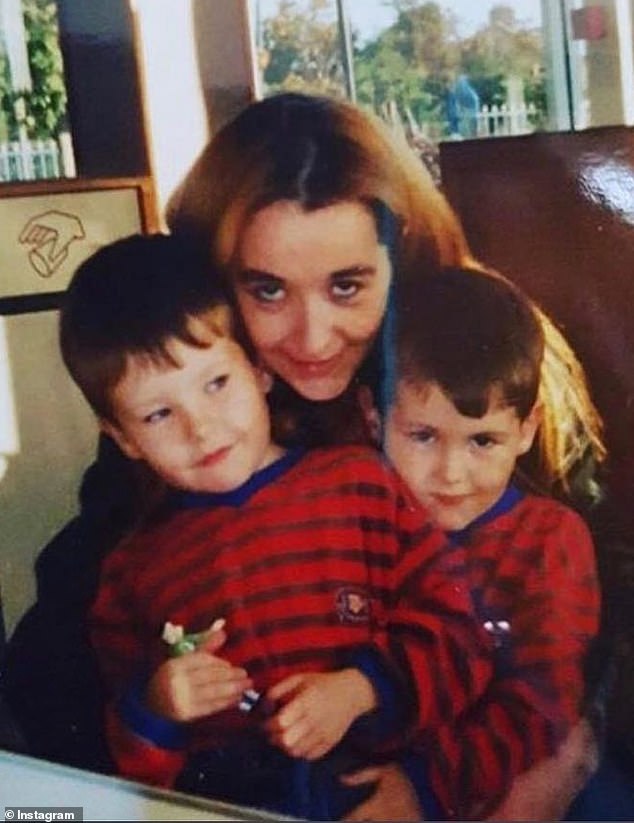 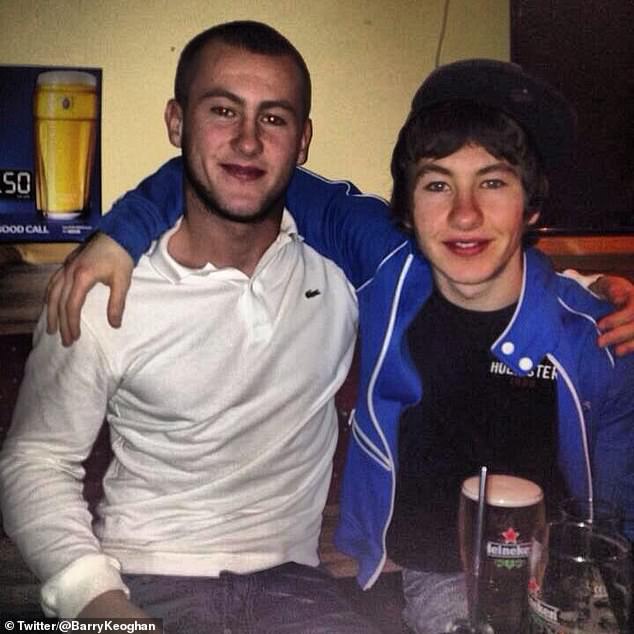 Barry Keoghan (right) and his brother Eric (left) were foster care for seven years, with the two siblings staying in 13 different homes over that period

Such circumstances plunged him and his younger brother, Eric, into foster care for seven years, with the two siblings staying in 13 different homes over this period.

Life was made even more difficult when his aunt and grandmother broke the news that his mother had died from a heroin overdose.

Keoghan, who was 12 at the time, described the moment as ‘worst day of his life’, but admitted the experience made him stronger as a result.

Talking about the crushing moment to JOE, he said:  ‘I remember it, it wasn’t nice. It’s not ever nice, kids being taken from their parents. 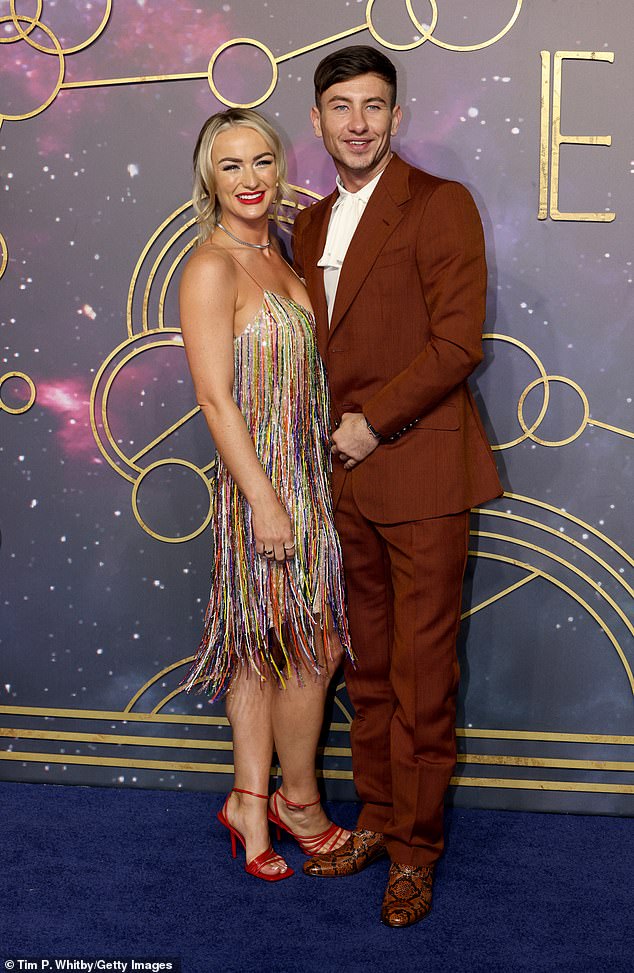 Keoghan said the time reinforced the bonds between him and his brother Eric, who he called a ‘legend’.

Eric often appears on his sibling’s Instagram feed. He has a baby girl and enjoys shooting in his spare time.

Growing up, Keoghan had his eyes on making it as a boxer – and still competes at an amateur level – or a footballer. 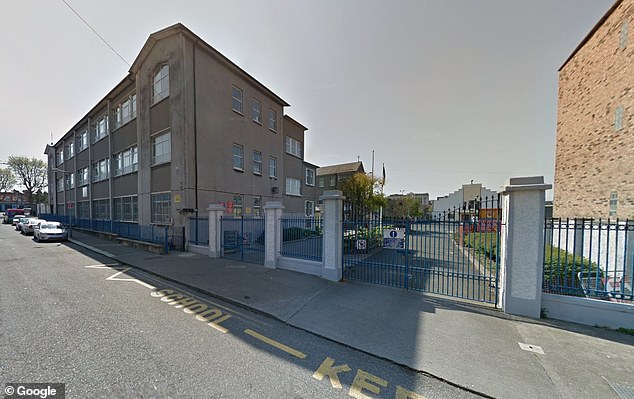 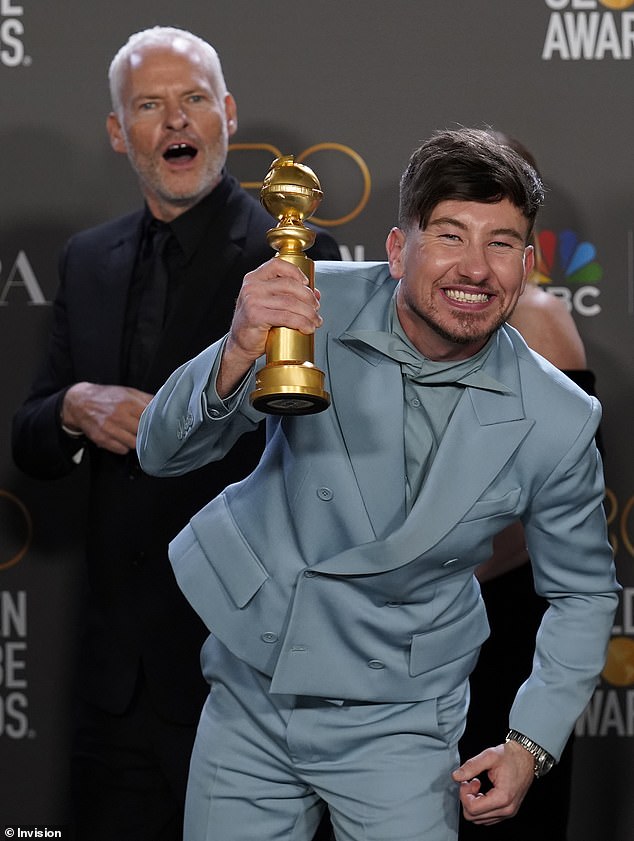 Barry Keoghan poses in the press room with the award for best motion picture, musical or comedy for “The Banshees of Inisherin” at the 80th annual Golden Globe Awards at the Beverly Hilton Hotel

In fact, his second cousin Frank Stapleton, 66, was a former Manchester United and Arsenal striker who garnered 71 caps for Republic of Ireland.

Keoghan was renowned for being a scamp and trickster at school.

While he was a student at O’Connell School on Dublin’s North Richmond Street he was kicked out of the school’s flagship play for ‘messing about’.

He still managed to get in trouble outside of school, where he recalled sneaking into the local cinema and watching films without paying. 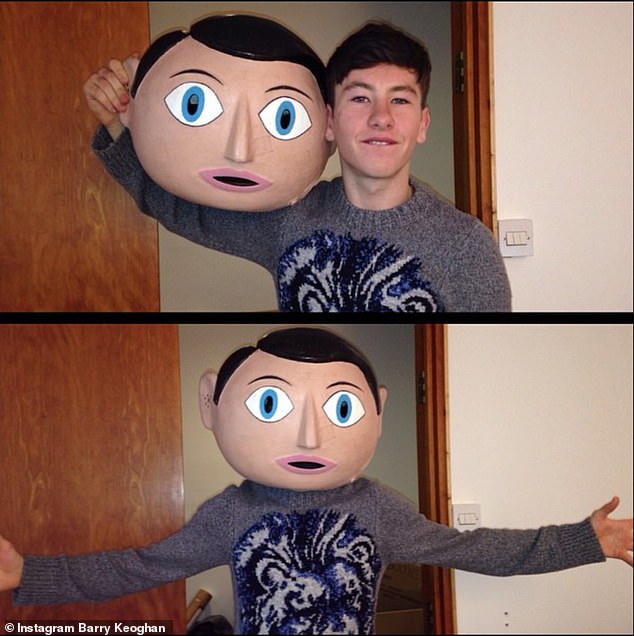 It’s also clear from Keoghan’s Instagram feed that he enjoyed getting dressed up. He posted a number of pictures of him dipping into costumes of wide ranging characters including Frank Sidebottom (above) and Spiderman

Keoghan told the Guardian that staff would chase him before hauling him out and barring him from the venue.

Little did he know, however, that years later, one of his movies would receive a special premiere at the same cinema.

Many people pursue film for fame, but for Keoghan, acting was and remains a cathartic release.

He explained how the job was therapeutic at a deeper level and has allowed him to let go of some of the pain which he endured during his childhood.

Nonetheless, it’s also clear from his Instagram feed he has always enjoyed getting dressed up. 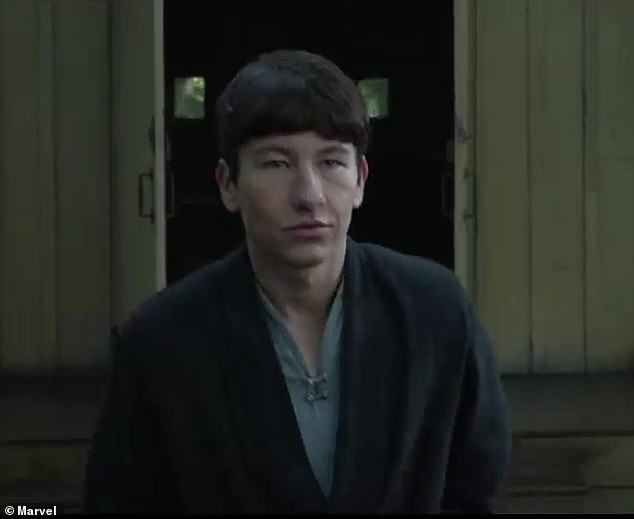 The Irish actor starring as Druig in the Marvel film Eternals (pictured). He has played a number of key roles in blockbuster films 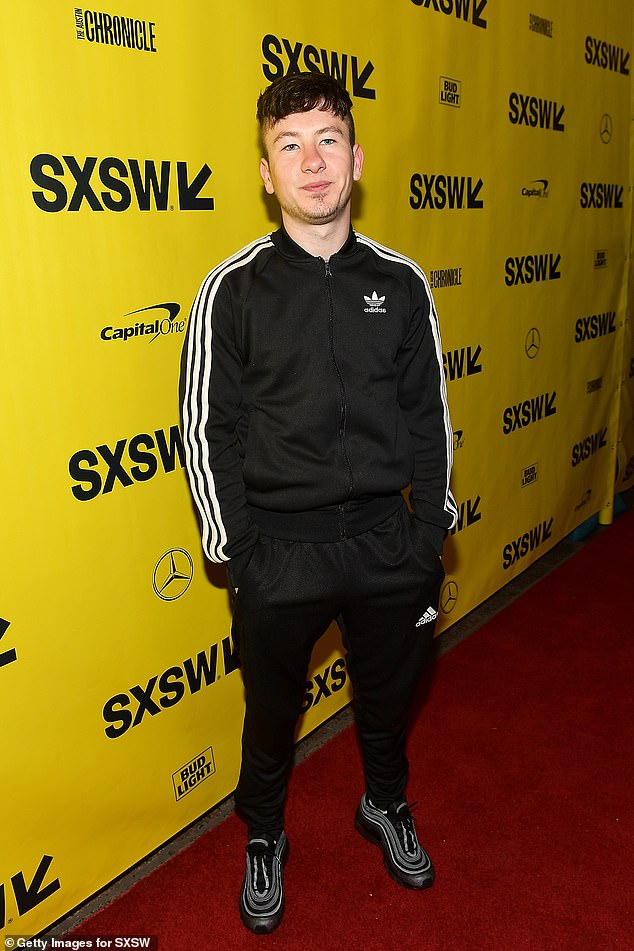 Growing up, Keoghan had his eyes on making it as a boxer – which he still plays at an amateur level – or a footballer (Pictured: Barry Keoghan attends the “American Animals” Premiere 2018)

Throughout his twenties, he posted a number of pictures of him trying on costumes of famous characters including Frank Sidebottom and Spiderman.

Keoghan fell into acting in 2011 when he applied for a role in Between the Canals – an Irish film following the life of three hardened criminals.

He then went on to study acting at The Factory in Dublin before appearing in the Irish soap Fair City at the age of 18.

His major breakthrough came when he landed a role in the second world war film Dunkirk where he portrayed the character George Mills. 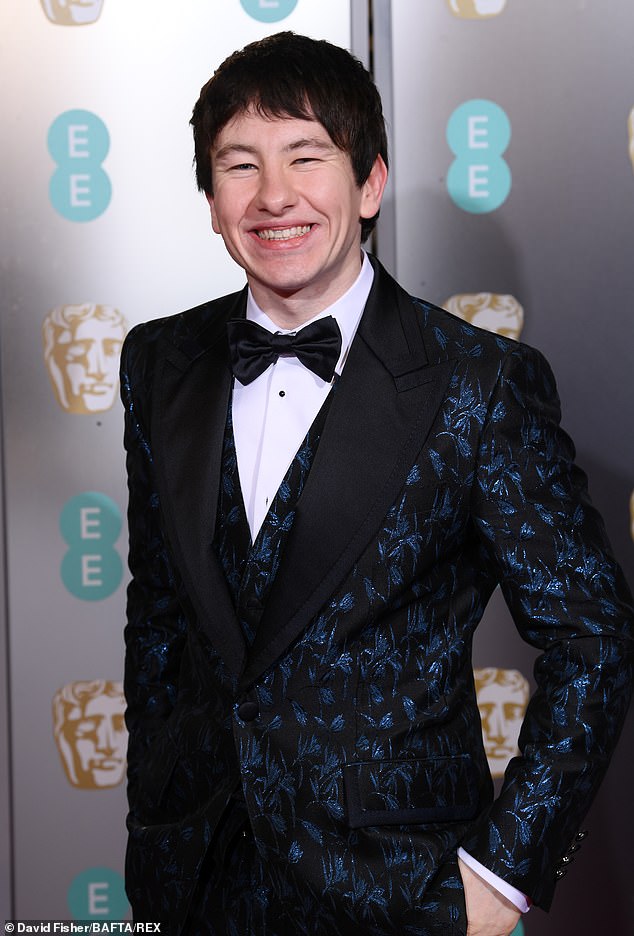 In 2021, it was reported Keoghan moved into a different relationship with Alyson Kierans, and the two welcomed a child in August 2022

Since then he has appeared in a string of famous films including The Batman, Eternals, American Animals and the TV series Chernobyl.

When he heard the latest The Batman film was in the production phase, he gave an unsolicited audition for the role of the Ridler.

When he met the film’s producer, Dylan Clark, the part had already been taken.

However, months later he got a call back, with the team asking if he could step in and play the Joker.

The Batman star in April 2022 also opened up about being diagnosed with ADHD, revealing how he sensed he had it when he was growing up.

His condition has made it difficult to read big books, admitting the reason why he was more attracted to film.

In his romantic life, it is known he started a relationship in 2017 with Shona Guerrin after meeting her at a pub.

Shona was working as a bartender at the time, but said the two should never have got together as she recalled Keoghan being with another woman at the time.

The two became boyfriend and girlfriend after Keoghan would not take ‘no’ for an answer.

In 2021, Keoghan started a new relationship, this time with Alyson Kierans, a dentist whose father is from County Cavan.

Just months after getting together he broke the news that the couple were expecting a baby.

His son Brandon was born on August 2022, and called the moment ‘indescribable’ in an interview with GQ magazine.

He now has garnered almost one million followers on Instagram and posts regularly on the site.

It was reported last year he was arrested in Dublin, Ireland early Sunday in connection with public intoxication while on the balcony of an apartment.

Officials ‘were called to the apartments after getting reports of a man on a balcony in an intoxicated state,’ a source told the outlet.

‘When they arrived he wasn’t threatening in any way but was arrested and brought to the garda station, where he was dealt with before being released.’

The Dublin, Ireland native was transported to Coolock garda station and given a caution before he was released from custody with no charge, according to the outlet.

A source at the time told independent.ie that the issue was over pretty quickly ‘and nothing more will come of it.’

A year before he was arrested he was a victim of assault and reportedly hospitalised and left with facial injuries.