After the Wedding is a remake of a Danish film from 2006. In the original, Mads Mikkelsen was called back to Copenhagen to receive a cash award for his work running an orphanage in India. The film was directed by the ever-reliable Susanne Bier, who specialises in intelligent adult dramas. 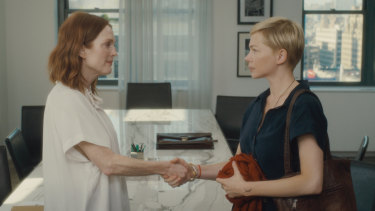 Julianne Moore (left) and Michelle Williams bring opposite acting styles to After the Wedding.

For the remake, New York director Bart Freundlich has reversed the gender of two of the key characters. Michelle Williams plays Isabel, who runs the Calcutta orphanage. She desperately needs money to keep the place going. Julianne Moore is Theresa, a businesswoman who's willing to give $2 million if Isabel will come to New York to explain her work. When she gets there, cranky as a hornet for being torn away from her kids, Isabel finds Theresa is in the midst of preparations for the wedding of her daughter Grace (Abby Quinn). Theresa insists she attend. At the nuptials, Isabel realises Theresa married a man she once loved. Oscar (Billy Crudup) is now a famous sculptor. Neither is happy to see the other.

Why change the genders? Well, it might help to mention that Moore has been married to Freundlich since 2003 and this project appears to be built around her casting. Moore first worked with Freundlich in 1997, on The Myth of Fingerprints. They have done a couple of other movies together – and why not? Moore is one of the reigning actors of her generation: who wouldn't want to work with her? And Freundlich likes to work with the same people over and over: Crudup has done two other movies with him, both opposite Moore (World Traveler from 2001 and Trust the Man from 2005).

Does the change of gender matter? That might depend on whether you enjoy Moore's brand of tragedy. She's drawn to tearjerkers, or perhaps I should say melodramas. Some of her great successes have been roles in which she was crying or dying or both (Far From Heaven, The Hours, Still Alice). Putting her opposite Williams, whose style is more minimalist, makes for some crackling scenes here, but they are not really enough to sustain the movie.

Freundlich is a sensitive storyteller. This one is built around a surprise I can't reveal and it's more than enough to hold our attention. The question then becomes how well he tells it. If he pushes the emotions too hard, it becomes mawkish, although that's just where some of the audience will want it to be. When a story earns it, most of us are happy to give up some tears; this one only thinks it does. That kills emotion, offering a facsimile of drama rather than the real thing.